Bike Camping In the City – With Kids! 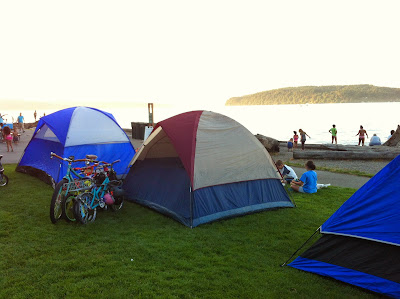 Metro Parks Tacoma started a new program last summer that allows folks to camp overnight at a few city parks on select summer nights. We couldn’t make it last year, but this year I made sure to register early for a tent spot at Owen Beach in Point Defiance Park.

The park is only about five miles from our house, so we made this a bike camping trip: I hauled the gear on our cargobike and the girls (6 and 8) rode their own bikes. 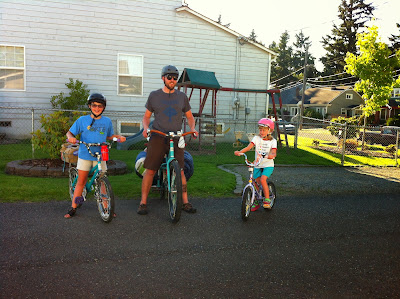 With room for one more in the tent, we decided to bring a friend along (8). He rode his own bike, too. 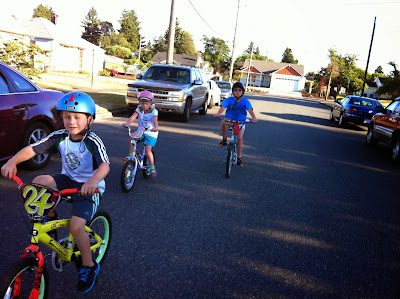 The evening of our campout turned out to be one if the hottest we’ll see all year with temps around 90°F as I loaded up the EdgeRunner. Our saving grace was a small spray bottle hanging from my handlebars so I could mist the kids with water as we pedaled.

About halfway to the park, I decided to make an impromptu stop at the Sherman Elementary pocket library where my oldest crashed hard into a curb and pinch flatted. Doh! 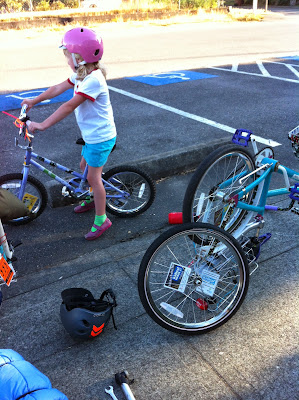 Luckily the EdgeRunner has a 20″ rear wheel, because I hadn’t thought to pack any extra tubes for kid bikes. It only took 10 minutes to change the tube and the kids rummaged through the library cabinet to find a few books to read later. Onward! 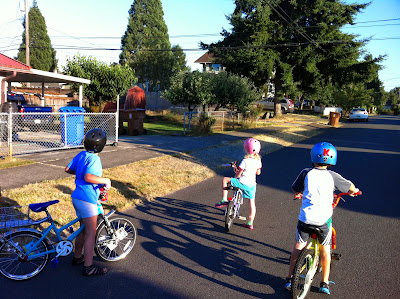 Stopping to see a deer bedded down in someone’s yard 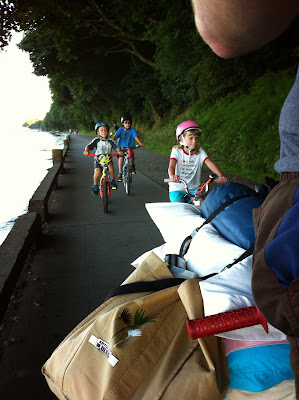 Homestretch: the waterfront trail between the Point Defiance marina and Owen Beach 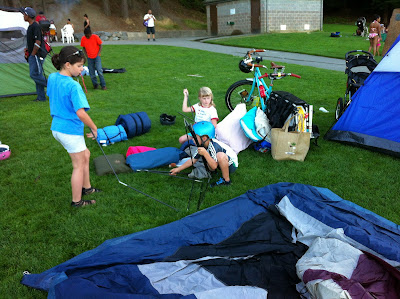 Everyone pitched in to pitch the tent 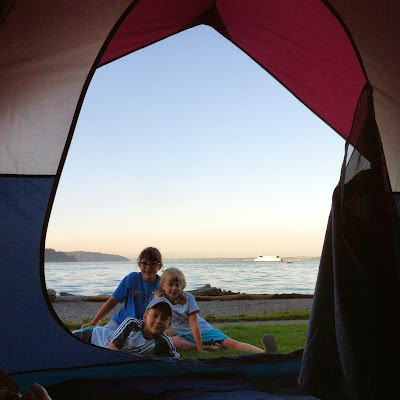 Room with a view: Vashon Island and the Point Defiance/Talehquah ferry

The kids had fun playing along the beach and on the hillside bluffs rising from the shoreline. The park was busy on this hot afternoon with many day-trippers staying until the park closed at dusk to take full advantage of the complete shade along the waterfront.

We packed some treats, but Metro Parks also provided campers with a few individually packaged snacks. There were also board games to borrow. The kids were completely spent by 10pm. We missed the storyteller that presumably started after we were fast asleep, but we did get to see the supermoon rising over the Port of Tacoma. 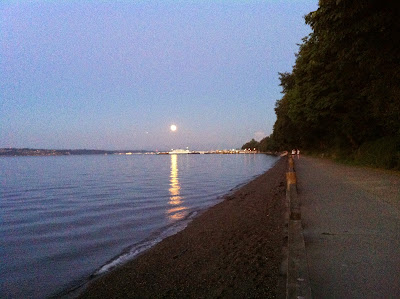 We rose at 7am the next morning for a light breakfast provided by Metro Parks (coffee, juice, milk, fruit, oatmeal.) My oldest said she counted 16 tents. 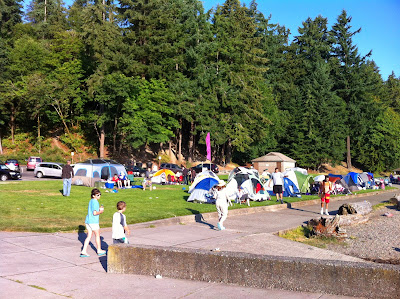 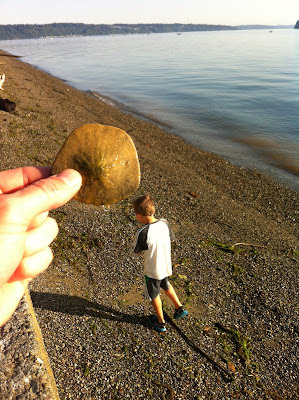 Beachcombing: the first sanddollar I’ve ever seen at Owen Beach 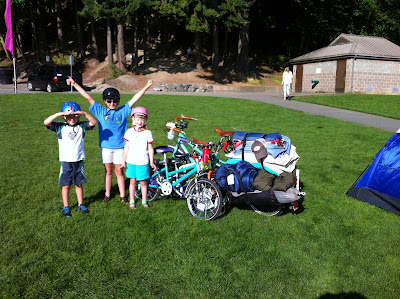 With another scorcher in the forecast, we set off for home around 8:30am to beat the heat. The ride home is nearly all uphill to some degree and I knew my little riders were only going to get more tired as the day progressed. 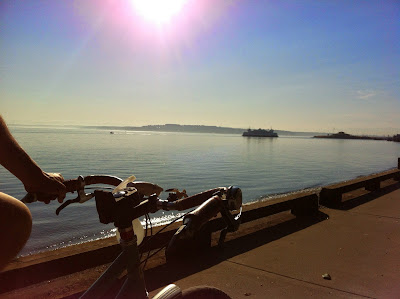 Watching that ferry never gets old 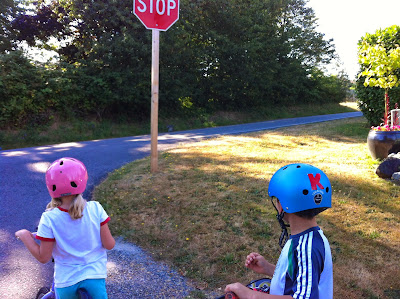 Stopping to watch a raccoon 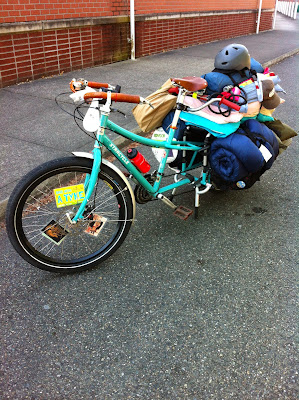 We stopped at the Sherman playground to stretch our riding legs after the steepest part of the ride home. (No flats this time!) I had promised the kids a donut stop, but at this point they were already saying that it was too hot for donuts. They wanted something cold for second breakfast. 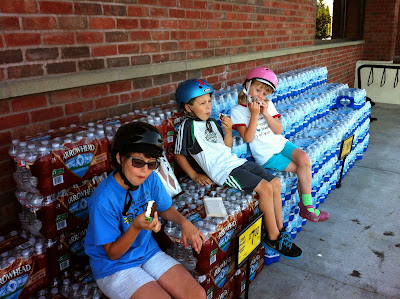 So we stopped at the grocery store and the three kids split a 6-pack of ice cream sandwiches. After nearly 10 miles of riding in the heat, these kids had earned it. To loosely quote bicycle guru Kent Peterson: Cyclists are not nutritional role models. This ridiculous pile of bottled water made an excellent make-shift picnic bench.

This short trip was a great opportunity for us to try bike camping and make some memories without ever leaving the city. All of us had a blast. My oldest said that the camping would not have been as fun if we had just driven to the park. I agree.

There are still two more opportunities for you to Campout with Metro Parks Tacoma this summer. Consider making these bike camping opportunities as well.

Matt Newport lives in Tacoma. He is an at-home parent who integrates bicycling into daily life as much as possible. This post originally appeared on his blog Tacoma Bike Ranch.

This article was posted in Adventure, Family biking, Kids, Pierce County, Tacoma and tagged bike camping, kids, Tacoma. Bookmark the permalink. Follow comments with the RSS feed for this post. Both comments and trackbacks are closed.