Remaining Active in the Golden Years 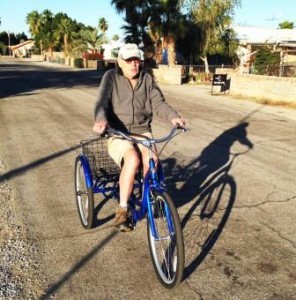 On Christmas Day, my partner Steve and I assembled an adult tricycle for his 88-year-old father.

“I’ve come full circle,” mused Steve. “Forty-five years ago, my Dad would have been putting a bike together for me. Now I’m assembling one for him.”

Steve’s Dad has always been an active man and he shared his love of outdoor pursuits with his children. He taught his kids to hike, bike and ski. He himself skied until he was 70, hiked into his early 80s, and gave up his bike only a couple of years ago when he felt balancing became an issue.

Concerned that their Dad’s lifestyle was becoming too sedentary, Steve and his siblings bought him a trike to ride around his neighborhood in Yuma, Arizona for recreation and short errands. And riding it he is! The flat, low-traffic neighborhood streets offer him a comfortable place to ride his trike.

The National Institutes of Health tell us that seniors benefit from remaining physically active. Moderate levels of activity can improve the health of people who are frail and can prevent or delay diseases associated with aging. Exercise and physical activity can help older Americans increase their stamina and muscle strength, improve their balance and flexibility, and help maintain their independence.

According to US Census data, the number of Americans 65 and older increased by 15% between 2000 and 2010 to 40,267,984. In Washington State, the 2010 census shows 827,677 senior residents, or 12.3% of our total population. We can expect that number to grow in coming years as more baby boomers reach the golden years. As more of us live longer, an increasing number of us can expect to live beyond our ability to drive safely. Biking and walking can help older Americans remain active, mobile and independent in their communities.

Safety on our streets is a major concern for older Americans according to a 2009 AARP report Planning Complete Streets for an Aging America:

In a poll conducted for this study, 40 percent of adults age 50 and older reported inadequate sidewalks in their neighborhoods. More sobering, 50 percent reported they cannot cross main roads close to their home safely. Half of those who reported such problems said they would walk, bike or take the bus more if these problems were fixed. These concerns are borne out by statistics showing older adults are more likely to be victims in both motor vehicle and pedestrian fatalities.

If we make our streets safer for the most vulnerable users, children and their grandparents, then we make our streets and neighborhoods safer for everyone. Many communities, including places in Washington, have established Safe Routes to School programs and Washington Bikes is a leader in this effort. We also worked hard to pass the Neighborhood Safe Streets bill so communities could have another tool available to them to make local streets friendlier to people.

Some US communities, like New York City, Chicago and Santa Barbara, have launched Safe Routes for Seniors programs. These initiatives work to improve pedestrian safety for older Americans and encourage them to maintain active lifestyles.

In 2012, with guidance from the World Health Organization, AARP introduced its Network of Age-Friendly Communities.  This program encourages states, local cities and towns to prepare for the needs of an aging population by focusing attention to the environmental, economic and social factors that influence the health and well being of older Americans. AARP provides a toolkit that gives participating communities a framework for creating and implementing an action plan that addresses local needs and circumstances. Twenty-one communities have signed on so far, including the city of Portland. There is no Washington community on the list yet.

The next time you are out and about on your neighborhood streets, imagine how it might feel to an elderly person to make his/her way on foot or by bike. Do crosswalk signals allow enough time for a slow moving person to safely make it through the intersection? Are sidewalks and paths wide enough (and smooth enough) for someone using a walker or wheelchair? Are curb ramps present at intersections? Are street signs and other directional signs easy to spot and read? If the answers are no, then it’s time to ask your city officials to complete your streets for older citizens. 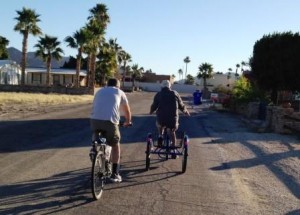 This article was posted in Accessibility, Attitudes, Complete Streets, Health, Safety, Seniors. Bookmark the permalink. Follow comments with the RSS feed for this post. Both comments and trackbacks are closed.