I LOVE MY COMMUNITY!! 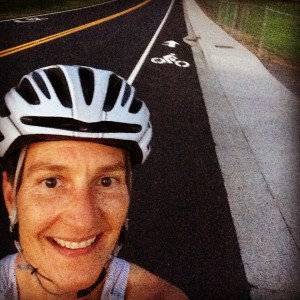 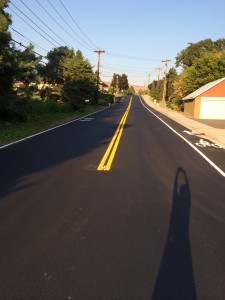 This was the first sentence in my August 7th Facebook post. Why do I love my city? There are many reasons, but among the top is the newly resurfaced/restriped road in front of my house. As I left for work on the morning of August 7th I noticed the street crews preparing for, what I assumed was “striping day” for the street upgrade project in my neighborhood. I remember making a mental note to myself, “Ugh!! I should have called the Planning Department to ask about the possibilities of striping bike lanes on this new surface.” I did not act on that intuition, yet arrived home that evening to discover my thought turned into reality! On the street, in front of my house, next to my driveway are honest to goodness markings that designate space for me and my bicycle. Specifically, the street now has a bike lane in the eastbound, uphill lane and sharrows in the westbound, downhill lane. For rural North Central Washington, this is progress!!

I moved to East Wentachee in 2006 and it didn’t take very long for me get involved in bike advocacy. I joined the newly re-energized Greater Wenatchee Bicycle Advisory Board (which eventually became the Regional Bicycle Advisory Board) because I was interested in increasing bicycle safety and awareness in the valley. I knew my new communities (the collective valley) had much to offer cyclists, after all, this is the home of the Apple Capital Loop Trail (the envy of my former Eastern Washington community) and bicycles are a visible component of this valley. Yet, the valley had a long way to go to become a Bicycle Friendly community. Bicycles are an accepted “norm” on the loop trail, yet haven’t always received the same warm fuzzy welcome out on the streets and roads of the communities.

One of the early tasks of the Regional Bicycle Advisory Board was to update the previous Bicycle Master Plan, a long and arduous task for me personally, yet a necessary step to get to the work I am interested in. The Greater Wenatchee Bicycle Master Plan was adopted by the Wenatchee Valley Transportation Council in May of 2013 and since its adoption I am beginning to see road improvements that accommodate bicycles, such as the street upgrade project in front of my house and the newly extended Eastmont Avenue that includes the valley’s only buffered bike lanes.

Today I am celebrating the Greater Wenatchee Metropolitan Area application to the League of American Bicyclists to be designated a Bicycle Friendly Community. After reviewing the application that was written and submitted by the Wenatchee Valley Transportation Council, I feel a sense of pride for the time and efforts so many bicycle enthusiasts have contributed and continue to contribute to balancing transportation options in the valley. The progress we have made, and which are noted in the application, in the few years I have lived here are gentle reminders to me of the value of these efforts, no matter how big or small, simple or arduous, that are truly making a difference! I LOVE MY COMMUNITY!

Deb Miller is a bicycle advocate extraordinaire in Wenatchee valley. Watch for future blog contributions from her.

This article was posted in Advocacy, Douglas County, Infrastructure, News, Wenatchee and tagged bicycle-friendly, East Wenatchee. Bookmark the permalink. Follow comments with the RSS feed for this post. Both comments and trackbacks are closed.