This post was first published on Marc’s Medium page.

I feel like I’m a respectful cyclist. I use hand signals, wear a helmet and road ID, I ride during the daytime and have lights for dusk, I stay on the shoulder or as far over to the right as possible to allow for passing cars even though I technically can take the whole lane as a moving vehicle. I can’t understand people who drive within inches from me, at normal speed, and don’t give any space when there are NO cars in the oncoming lane. I know you might not care for cyclists and think that you’re invincible in a car… But you’ll be singing a different tune if you kill somebody’s sister, daughter, mother, or wife (or anyone). Please take a few extra seconds of your day to be conscientious and create a chain reaction for the cars behind you to do the same. 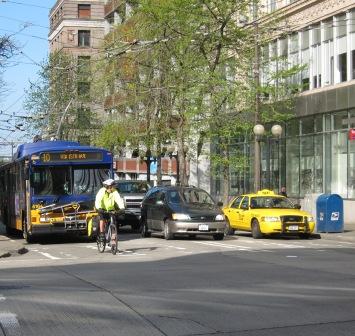 This cyclist is positioned to take the lane.

And we don’t do ourselves any favors riding so far to the right. It invites close passes by motorists who really don’t intend us any harm and would be surprised to discover how their close passes unnerve us.

Take the lane! That means riding far enough left in the lane to ensure passing motorists have to change lanes to go around.

When I take the lane I’ve discovered I get far fewer close passes. Do I get angry shouts from motorists who think I should be riding farther right? Surprisingly, no more shouts than I get when I am riding farther right. And they are the same shouts, “Get off the road!” Never, “Ride to the right!”

Why? Because the typical motorist, seeing there’s no room to pass in the same lane, does what they’re supposed to do—they get in the other lane to pass, slowing down and waiting for oncoming traffic if necessary. And knowing they have to get in the other lane, they get all the way over.

When you’re riding farther to the right, many motorists approach thinking there’s adequate room to pass. Even if they realize there’s not enough room to pass safely, they may not realize it until it’s too late, until after they’re committed and slowing or moving left would seem an even more dangerous move to them—a swerve or dangerous brake jamming maneuver. So they pass within inches. Afterwards, many are as unnerved as the cyclists.

This is especially true when there is oncoming traffic. The motorist approaches the cyclist from behind. It looks like there’s enough room to get by, so they don’t slow down. Suddenly, there’s oncoming traffic and they’re going too fast. In this situation, they often speed up in an attempt to get around sooner, increasing the danger.

When you take the lane, the same motorist sees from a distance they can’t pass without changing lanes. They slow to accommodate oncoming traffic. And they change lanes, passing with plenty of room.

It’s counterintuitive to think cyclists politely riding to the right result in worse behavior by motorists than the seemingly less polite and more disruptive practice of taking the lane. But in my experience, it doesn’t. Taking the lane is the safest practice and results in the best motorist behavior.

In general, I encounter three types of dangerous motorists while riding. There’s the hostile motorist most cyclists fear. This driver doesn’t want bikes on the road. Doesn’t matter whether or not you ride far right or take the lane. This driver’s response is the same: pass close, shout, or worse.

When a cyclist is riding far right, it lets the hostile motorist buzz by dangerously close, with ease. When you take the lane, it forces the hostile motorist to move over and go around. And the mere fact they have to move over means they’ll usually, even if unintentionally, give you more space! It’s not so easy for them to line up from half a mile away to buzz you. If they can’t see far enough ahead to change lanes, for their own safety they’ll slow down and wait. They’ll cuss and fume and shout when they go by—just like they would if they didn’t have to move over!

So even the worst behaved motorists actually behave better when you take the lane.

The second type of dangerous motorist is the inattentive driver. This driver doesn’t even notice you’re there until they’re too close. This driver kills and injures more cyclists than any other. And this driver is much more likely to hit you when you ride far right. They tend to only be looking straight ahead. They drift right without realizing it. They aren’t aiming for you—they just don’t see you.

This motorist does know how to pass another automobile. When you take the lane, this motorist will know there’s not room to pass without getting over. Will get over. Won’t be bothered by getting over. Would have gotten over anyway had they known! They just didn’t know. And by taking the lane, you make it clear.

Although it’s dangerous to draw generalizations along gender lines, I’ve noticed a pattern. When riding far right, it is often women who pass too close. They pass within inches of me, even though there’s no oncoming traffic and they could get over. Often, I even get a little I’m sorry hand wave from these ladies after they’ve passed.

I think that’s because women, more than men, tend to follow the rules. These particular ladies don’t want to cross that double that yellow line. If they can get past without hitting me and without crossing over the yellow line, that seems the best compromise to them. When I take the lane, these ladies choose to pass safely. I get a friendly smile and wave instead of theI’m sorry wave.

I ride more in the lane while riding with groups Marc, and I know it sounds pansy-ish, but as a girl riding alone without the same strength in numbers I just don’t have the same cahones. Literally.

I think female cyclists often have an advantage here. I notice when riding with my wife motorists generally give us more room. And when I ride with my five year old granddaughter on the Trail-a-Bike, we get plenty of room. Many people, men and women alike, give women and children on bikes more room on the road.

There are even more reasons to take the lane! Watch this visualization to see some of them. When you ride far right, leaving enough room for an automobile to pass you in the same lane, that vehicle blocks you from the view of oncoming traffic. Suppose an oncoming vehicle is preparing to make a left turn. They see the car passing you, but they don’t see you. They start their turn as the car, now just ahead of you clears the intersection, and BAM!—there you are! If you take the lane, you are clearly visible to both the car behind you and the oncoming vehicle preparing to turn left.

Of course, some motorists will be irritated when you take the lane. They’ll insist it’s rude and disrespectful to do so, that it’s your duty to ride as far right as possible. In fact, in the comments to Veronica’s Facebook post, one did just that. But which behavior is more rude and disrespectful: taking the lane forcing faster traffic to go around, and perhaps wait a few seconds; or pass dangerously close risking the death or injury of a cyclist?

A few words to motorists

The irritation you feel when a cyclist takes the lane, potentially delaying you a few seconds is misplaced. Most of the time, you won’t be delayed at all. You’ll be able to change lanes and continue on your way, without delay. When you are delayed, it will likely be a very short delay. You’ll just arrive at the next red-light a few seconds later than you would have otherwise, and you’ll wait just a bit less at that light. And because there was a bicycle in front of you that you were able to get around, instead of a car, you’ll have one less vehicle ahead of you at that light so you’ll get through it sooner. When you arrive at your destination, there might just be one more available parking space.

When cyclists take the lane, it isn’t to cause you irritation or delay. It isn’t to be rude, disrespectful, or arrogant. It’s for our own safety. It’s because whether you know it or not, without taking the lane, we unintentionally invite close, dangerous passes. Perhaps you would give us the room we need if we rode far right, but many others would pass too close endangering us.

This article was posted in Attitudes, Education, Safety and tagged traffic safety. Bookmark the permalink. Follow comments with the RSS feed for this post. Both comments and trackbacks are closed.