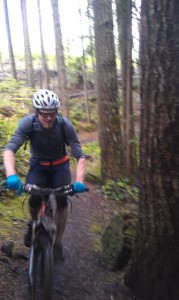 Josh Miller, our Go By Bike program manager, has had a lifelong love affair with bicycling. His riding interests—and bikes—have spanned the spectrum from BMX riding and mountain biking, to urban commuting, bicycle touring and, most recently, fat tire snow biking.

It was his passion for biking that originally brought Josh to Washington Bikes nearly three years ago. It is that very same passion that is prompting him to move on at the end of this month when he assumes a new position at Cascade Bicycle Club so that he can continue to work in bike advocacy and education.

Building the Go By Bike program from the ground up is Josh’s proudest accomplishment with WA Bikes. He forged relationships with the participating colleges in the Puget Sound region, acquired bike fleets, developed course curricula and classroom materials, recruited and trained instructors, and co-taught GBB at the colleges.

“We observed great gains in students’ bike handling skills as well as safety practices on the road,” noted Josh. “In follow-up survey responses, many students reported that they felt safer and more confident biking on the road and that they were safer car drivers around bike riders. Many students also reported that they were riding their bikes more often and for more types of trips after taking the course,” he added.

Some of Josh’s fondest WA Bikes memories involve the students that he met in the GBB classes. 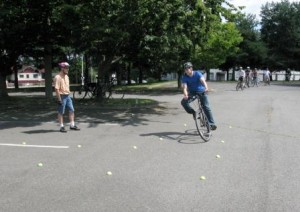 “There was one student who insisted that she would not be able to take her right hand off the handlebar in order to signal a turn. She was resistant to riding one-handed with her left hand,” Josh recalled. “After some extra one-on-one coaching and an extra dose of encouragement, she got to be steady riding with her left hand in the course of half an hour.”

Josh’s service at WA Bikes went beyond the Go By Bike program. He sat on the Safe Routes to School National Partnership Steering Committee and represented us on the Puget Sound Regional Council’s Bicycle and Pedestrian Advisory Committee. Josh was also one of the lead organizers of the 2013 UW Bicycle Urbanism Symposium. He has provided technical assistance to Cowlitz County communities regarding the implementation of the Neighborhood Safe Streets law that was our #1 legislative priority (enacted in 2013), and gave numerous presentations at conferences and major workplaces.

“We really benefited from Josh’s expertise, the knowledge he brought from his master’s in planning and his Ph.D. work on the built environment, and from his willingness to be an all-around resource. All of his work was in keeping with his commitment to great bike education,” said WA Bikes executive director Barb Chamberlain. “We’re sorry to lose such a great team member who was always sharing interesting resources that made us think (and sometimes made us laugh).” She added that the grant funding for GBB as a pilot program was drawing to a close–otherwise Josh would keep contributing his talents at WA Bikes–and went on to say, “It helps to know that he’s with our partners at Cascade and that we’ll have the chance to keep working with him to get more people on bikes more often.”

The next chapter in Josh’s service to the bicycle community starts when he assumes the role of Classes and Camps Coordinator for Cascade Bicycle Club. His work will include developing curriculum, recruiting instructors, and marketing and evaluating bicycle skills and maintenance classes for adults and youth. Josh looks forward to collaborating with WA Bikes staff on education projects and issues.

When asked if he had any parting thoughts to share, Josh noted how appreciative he is for the opportunities presented to him at WA Bikes. He is also grateful to the level of support given by members, volunteers, the Board and staff.

“A hearty thanks to all and keep sharing the joy of cycling!” he declared.

This article was posted in Go By Bike, News, People. Bookmark the permalink. Follow comments with the RSS feed for this post. Both comments and trackbacks are closed.