“One Bus Away says the 522 will be at the stop in 5 minutes!” I hastily saved two files to Dropbox so I could continue working on them after I got home, threw my electronic miscellany into my bag, and buckled on my helmet.

Pulling my gloves on with my teeth in an effort to save every possible millisecond between our office and the transit stop at 4th and Jackson, I rolled out the door. As soon as the light changed I sprinted up Jackson, hoping the drivers ahead of me wouldn’t be texting and not notice when the lights turned green. Every second counted. (And of course, the texting would be illegal. But this was about catching the bus because there wouldn’t be another one for at least half an hour.)

When I got to the intersection at 4th I could see the big blue and white Sound Transit vehicle pulling away from the stop, then stopping at the light as I crossed through the green light in front of it.

“Nooooo! That’s my bus!” I put on my best pleading expression to look through the door at the driver, who smiled apologetically and mouthed, “I can’t.”

I know that. It’s against the rules for them to pick me up at a stoplight that could change at any second. Hope springs eternal.

But then I realized, “Hey! This bus has more stops and I can catch him!”

The light changed. The 522 pulled out. A big double-decker Community Transit bus pulled out. I dropped into the lane and hit the hammer, such as it is when we’re talking about me since I’m not much of a sprinter.

It’s all uphill on 4th from that intersection. I climbed in the bus lane–no point in trying to weave through 4 lanes of traffic to the bike lane on the far left side when the bus stops were all on the right side. And Seattle has a nice multimodal set-up: Bus lanes are also for bikes. It’s no fun for bicyclist or bus driver if you’re leap-frogging but at a time like this it was perfect–no single-occupancy vehicles could cut me off or slow me down.

For a couple of blocks I had no idea how I was doing. I was keeping up with the double-decker, but what about the 522?

The double-decker moved one lane over and I spotted the 522, stopped ahead of me. Victory! I leaped onto the sidewalk (it’s times like this that make me wish I knew how to do a bunny-hop with my bike) and ran as two people got on the bus.

The bus driver smiled at me. “I was watching for you but I couldn’t see you back there,” he said. “I couldn’t let you on at the light because it’s against the rules.”

“I know. I was behind the double-decker. Thanks for looking out for me.”

I wish I could have taken a picture of my bike on the bus rack as a symbol of how I won the race, but that would have slowed us down and they’ve got a schedule to keep. 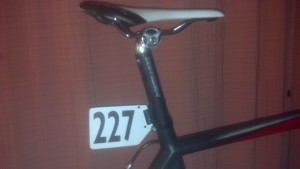 This race number is not on my bike. If you see it out on the road, say hi to my bike-racing husband.

What I haven’t done yet and may never do: Get out on a race course and compete against other riders.

My husband races and I’ve volunteered in various ways to support Washington’s great bike-racing scene. I ran track in high school (not very fast), and years later paddled with a dragon boat team in Spokane, which rekindled my competitive spirit for a while.

But I don’t have the drive or the time required to train extensively, exhaustively, painfully, to become a strong racer. I’ll just keep racing the bus and hoping I win every time.

This article was posted in Attitudes, Commuting, Transit. Bookmark the permalink. Follow comments with the RSS feed for this post. Both comments and trackbacks are closed.