Washington is a leader in implementing Safe Routes to School programs in school districts, teaching new motorists how to drive safely around bicyclists and pedestrians in drivers’ education courses, and including questions about bicyclist and pedestrian interactions on the driver’s license test.  And it all started with the passage of the Cooper Jones Bicycle and Pedestrian Safety Education Act fifteen years ago. 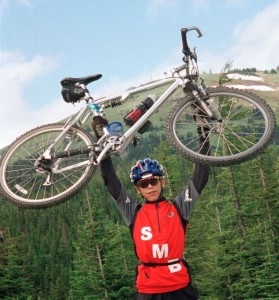 Sadly, it took the death of 13-year-old Cooper Jones of Spokane to set things in motion.

Cooper, a member of Baddlands Cycling Club, was participating in a club time trial in the summer of 1997 when he was tragically hit from behind by a careless motorist. His parents, David and Martha Jones, channeled their grief into action by partnering with Spokane bike advocates and Washington Bikes to pass the Cooper Jones Act into law in 1998.

Cooper’s untimely death in a time trial also galvanized the bike racing community. When WSDOT threatened to revoke all permits for competitive road cycling events around the state, the racing community worked with Washington Bikes to bring WSDOT and other key agencies to the table to create the Washington State Bicycle Racing Guidelines. This document is used by race organizers and local jurisdictions as a guide to produce safe racing events.

The Cooper Jones Act of 1998 is the foundation for other bills, policies and programs to build upon bicycle and pedestrian safety and education in our state. Since the passage of this landmark legislation, Washington Bikes and our allies have achieved much for bicyclists and pedestrians. Successes include creation of the Share the Road license plate, incorporating bicycle and pedestrian safety into drivers’ education curriculum, institutionalizing Safe Routes to School under WSDOT, elevating texting/handheld cell phone use while driving to a primary traffic offense, and passage of the Vulnerable User and Neighborhood Safe Streets bills. It is through these accomplishments that we honor Cooper and continue to grow his legacy.

This article was posted in Advocacy, Education, Funding/Policy, News, People, Safe Routes to School, Safety, Share the Road, Spokane County. Bookmark the permalink. Follow comments with the RSS feed for this post. Both comments and trackbacks are closed.