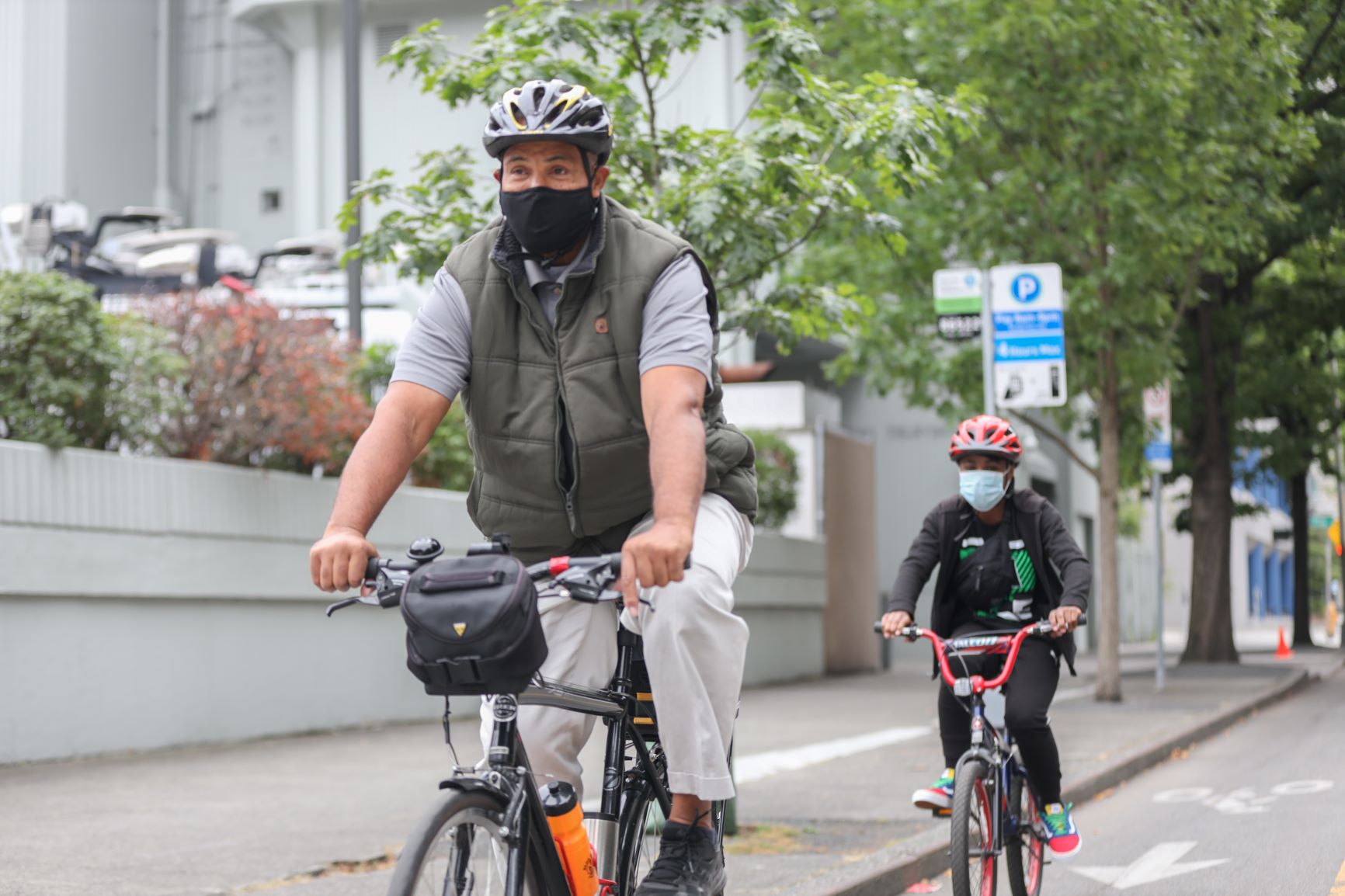 Seattle police have stopped and ticketed Black people for not wearing bicycle helmets at a rate about four times greater than for white people since 2003, according to data obtained by the King County Helmet Law Working Group, of which Washington Bikes is a member.

Black people represent about eight percent of Seattle’s population but they received more than 17 percent of the tickets for violating the bicycle helmet law, the group found after reviewing Seattle Municipal Court data on 1,667 helmet infractions. 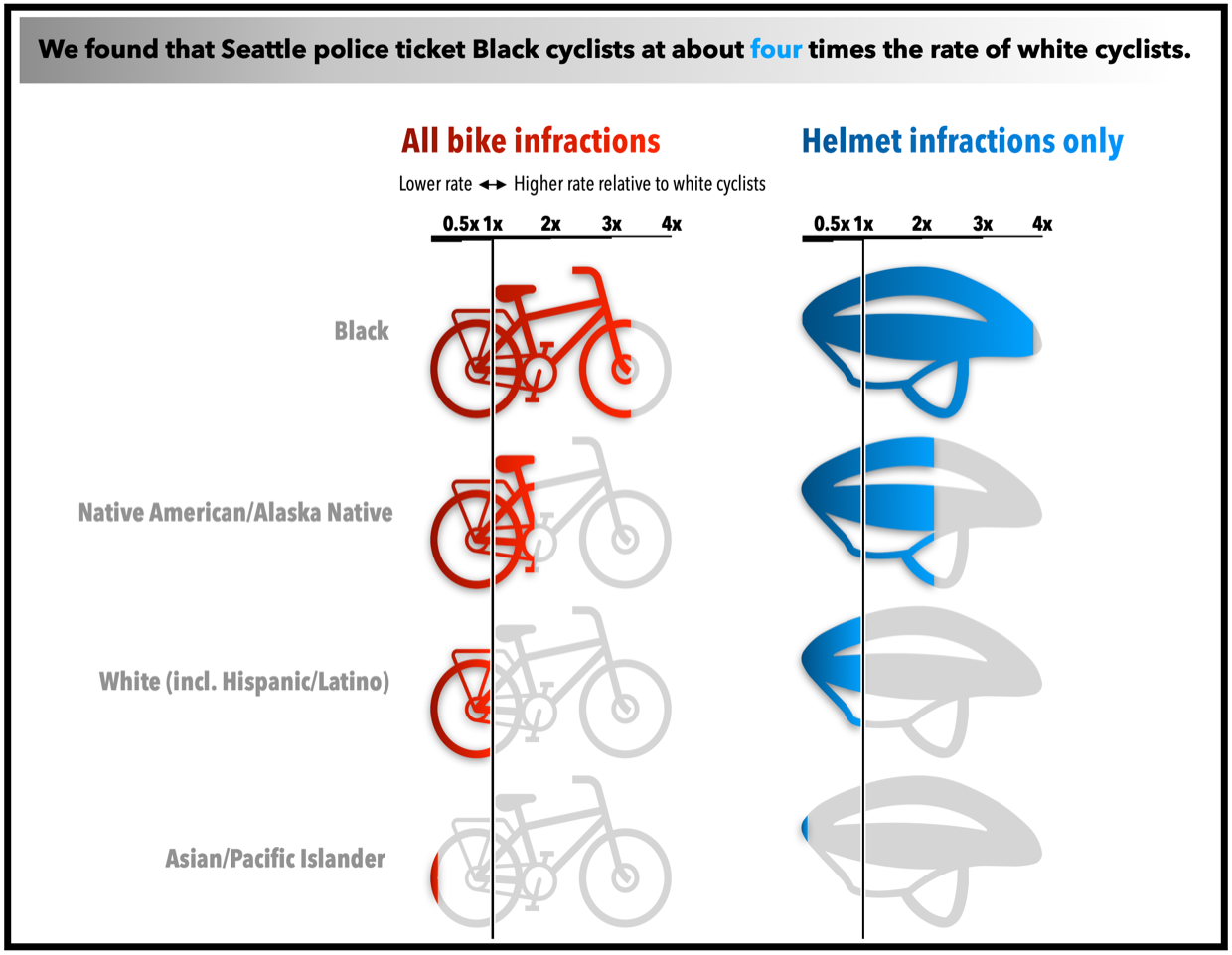 The disproportionate ticketing of Black people riding bikes is even more notable in light of the group’s data that shows Black people make less than five percent of all the bike rides in Seattle. Due to this new data and a growing body of evidence showing that helmet laws disproportionately impact communities of color across the country, Cascade Bicycle Club and Washington Bikes are working with the Helmet Law Working Group to gather data and community input to create a process for decriminalizing helmet use in King County and Seattle.

The Helmet Law Working Group was formed last summer by Central Seattle Greenways, a member of the Seattle Neighborhood Greenways coalition, in the wake of the Black Lives Matter movement and its focus on racism in policing. Members include Cascade and its sister organization Washington Bikes, Real Change, and individuals from other transportation and equity-focused groups. Cascade and Washington Bikes are participating as part of their Commitment to Anti-Racism and with support from the Board of Directors to pursue initiatives that decriminalize helmet use.

The group’s data analysis was done by Ethan Campbell, a 26-year-old University of Washington Ph.D. student who got involved with the issue last summer after joining with other bike riders to support the Black Lives Matter protests. Campbell produced a Technical Report explaining the methodology and findings. He hopes to refine the study and submit it to a peer-reviewed journal for publication. 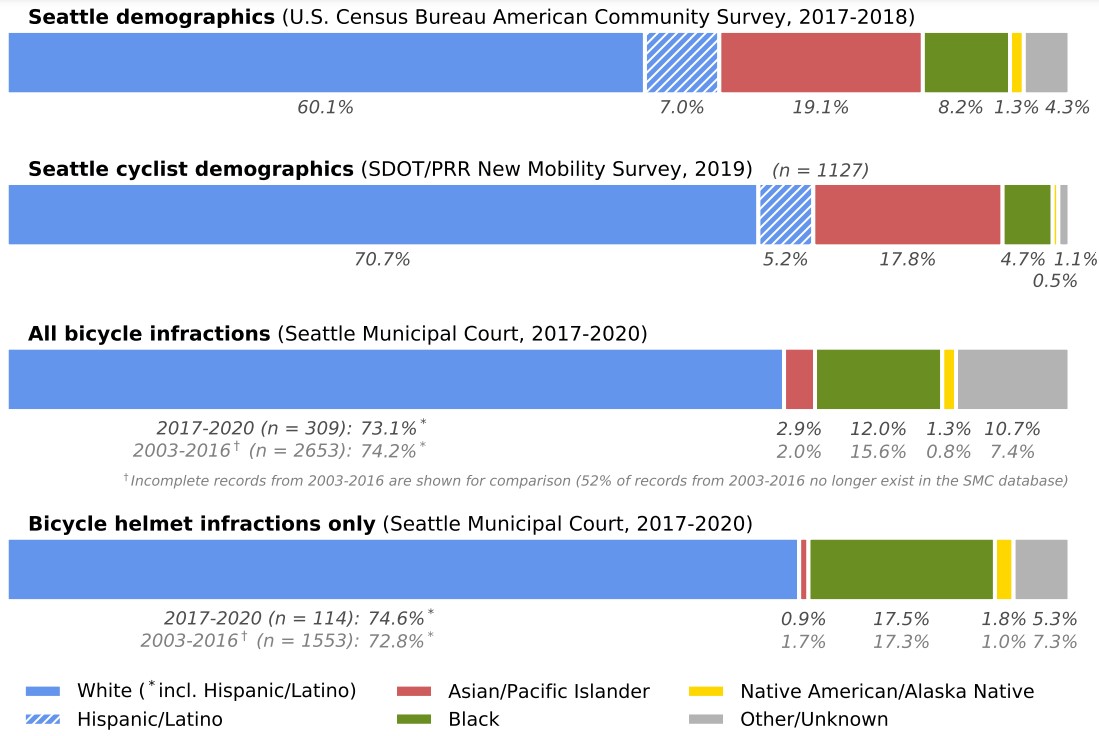 People who would like to share their thoughts about the helmet law in King County, which Seattle enforces, are invited to fill out an anonymous survey about their experiences with police enforcement of bike infractions..

Cascade previously advocated for King County’s helmet law but is now calling for public officials to review the law with the potential for repealing it. The case for repeal is even stronger in light of recent reporting that shows nearly half of Seattle’s helmet tickets go to people experiencing homelessness.

Cascade and Washington Bikes support the voluntary use of helmets, as they can reduce head injuries, and will continue to require helmet usage in Free Group Rides and at community events and all Cascade lessons and programming. However, data shows that other public policies including safer street infrastructure, such as protected bike lanes, and reductions in vehicle speeds are more important for reducing injuries and deaths among people riding bikes. That’s why Cascade supports the effort underway in Seattle to reduce speed limits to 25 mph on most arterial streets.

“The data shows conclusively that the number one safety issue for people biking or walking is vehicle speeds,” says Alex Alston, state policy director for Washington Bikes. “Anything we can do to slow down vehicles saves lives.”

Racial disparities in the enforcement of helmet laws is not just a problem in Seattle. National reporting has shown that communities of color have been ticketed and stopped at disproportionate rates in other cities, leading some communities to repeal their helmet ordinances.

Tacoma, Wash., repealed its bicycle helmet law in the summer of 2020. In 2018, a federal court ordered the city to pay $500,000 to a teenager who was thrown to the ground and tased by an off-duty city police officer after being stopped while bike riding without a helmet. The incident can be seen in this video, but be advised the video shows violence.

There are other reasons to oppose mandatory helmet laws beyond racial profiling. These laws can discourage people from bicycling, especially people who cannot afford helmets, which is an impediment to the public policy goal of getting more people to ride bikes for both health and environmental reasons.

Campbell’s analysis shows a dramatic decline in tickets issued for bicycle infractions over the past decade, from a peak of 789 in 2011, down to 118 in 2019, and just 17 through June of 2020, the last date for which he collected data. The reduction in tickets issued does not necessarily mean there are fewer police stops, however, as just a fraction of stops result in citations, Campbell says.

If police are issuing fewer tickets for bicycle infractions, why is it important to repeal the helmet law? “There is nothing preventing the police department from increasing enforcement, and for those vulnerable populations it’s still an issue as long as this law is on the books,” Campbell says. “But for the wider public, your chance of getting stopped while riding a bike is almost nonexistent.”

Campbell, who is Asian-American, was stunned to see how people of Asian and Pacific Islander descent were one of the least-likely groups to be ticketed by police while bicycling. “It was staggering for me to see that Asian cyclists get cited for not wearing helmets at a rate 11 times lower than expected for their share of bike trips.”

“What that tells me is that police are being totally discretionary in whom they stop. Police are able to use this law to target certain communities that, for whatever reason, they already want to stop,” Campbell says.

The Washington Department of Transportation has compiled a list of municipalities in the state with helmet laws.