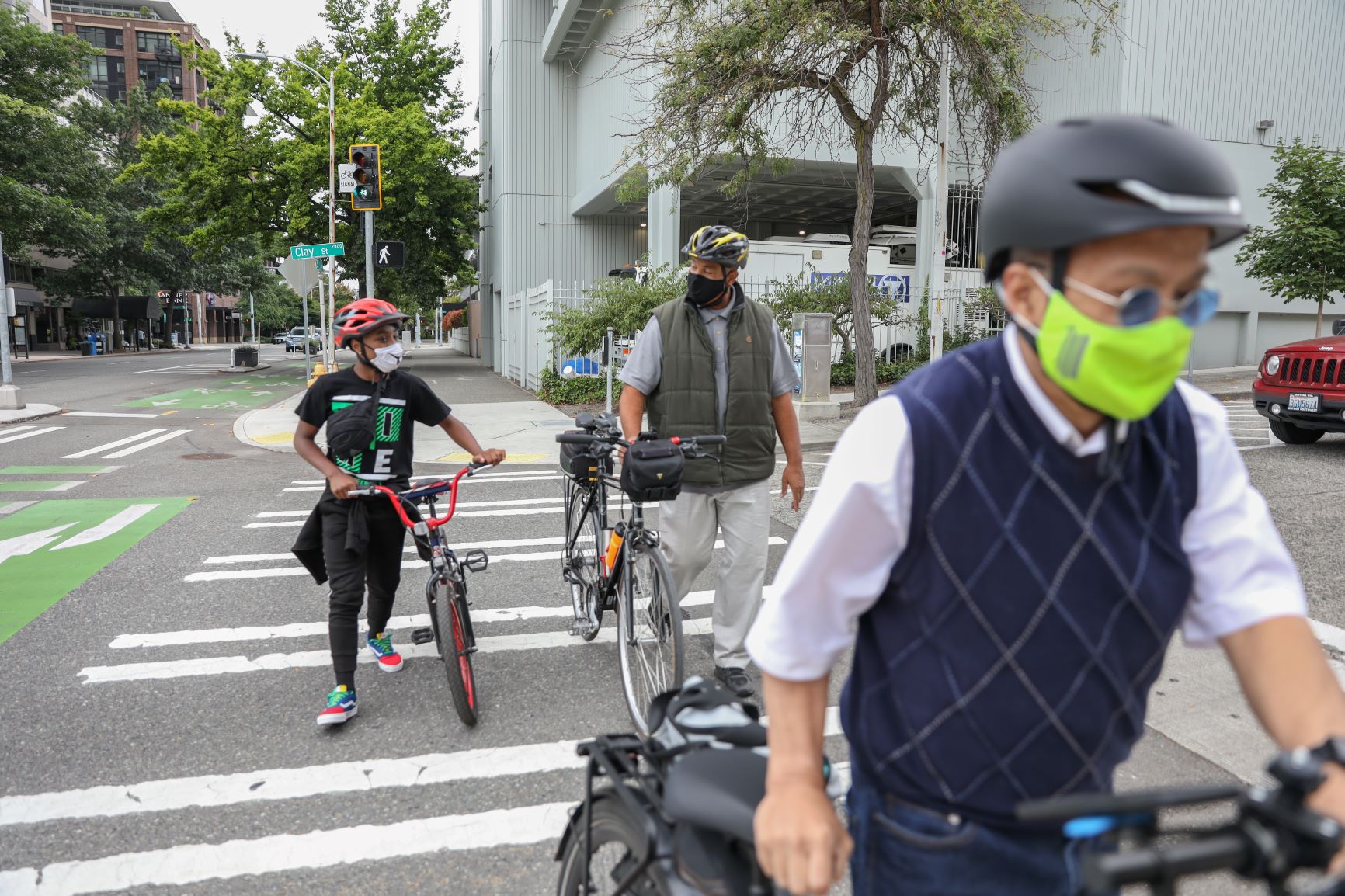 If we distilled Washington Bikes’ new position on bike helmets down to a bumper sticker, it might read: Helmets Yes. Helmet Laws No.

As Alexander Lew of the Seattle Bicycle Advisory Board told the Seattle Times: “I wear a helmet every time I ride a bike, but it shouldn’t be something that is criminalized.”

A lively debate has erupted online and in the media about the pros and cons of repealing the King County bicycle helmet ordinance. In addition to the Seattle Times, media outlets including Bicycle Retailer and Industry News, the Seattle Bike Blog, and Crosscut have written about the issue.

There has also been progress: the King County Board of Health, which enacted the law in 1993, is now reviewing the helmet ordinance, with the possibility of repealing or changing it.

Unfortunately, there has been confusion about the law, its harmful impacts and unintended consequences, and why Washington Bikes and Cascade support the effort to review and repeal. To clarify our intent and rationale, we’ve created a Q&A:

No! We encourage everyone who can afford a bike helmet to wear one. And we continue to require them to participate in our events. In addition, Cascade will continue providing them to youths involved with its Major Taylor Project and Let’s Go programs, as well as providing helmets free of charge to Learn to Ride participants.

If you encourage helmet use, why are you supporting the effort to repeal the King County law?

We believe the helmet law was enacted with good intentions in 1993, but we have learned a lot in the nearly three decades since. Nationally and locally, we have seen other cities repeal or alter their helmet laws due to evidence of racial bias in enforcement, with Black, Indigenous, and People of Color often ticketed and stopped at higher rates. Last year, Tacoma, Wash., repealed its bicycle helmet law.

In light of these developments, our board of directors approved a policy position calling for the repeal of the King County law, which led to our staff joining the King County Helmet Law Working Group and local coalitions working to examine the King County law and its enforcement in Seattle. This effort is guided by our  Commitment to Anti-Racism.

A researcher with the King County Helmet Law Working Group, Ethan Campbell, recently released the results of his lengthy and exhaustive study of helmet ordinance infractions issued by Seattle police. Campbell’s data shows that Black people have been ticketed at a rate nearly four times greater than white people, despite the fact that Black people make fewer bike trips in Seattle. The law has also been used to target homeless populations.

Due to this data showing racial bias in enforcement and the targeting of vulnerable populations, Cascade and Washington Bikes decided to publicly support the effort to repeal the King County law, and to speak out on behalf of efforts to decriminalize bike riding in Seattle and King County.

In addition to racial bias, socioeconomic factors are also important to consider. Bike helmets are expensive. Should a person coping with homelessness be criminalized for riding a bike to their job without a helmet?

No. We found no conclusive data to support the claim that places with bike helmet laws are safer. In fact, helmet laws may make bike riding more dangerous by discouraging some people from riding and thus reducing the “safety in numbers” effect. This is why groups including Transportation Alternatives for Safe Streets for Families oppose mandatory helmet laws. Places where more people ride bikes tend to be safer, and helmet laws can have the negative consequence of shrinking the number of people who ride. This is contrary to Cascade’s mission, and to the public health goal of encouraging more people to bicycle.

It sounds like an easy question, but it’s actually quite complex. First we must separate the issue of head protection from safety. Head protection is just one aspect of safety. In some types of crashes, helmets have been shown to protect people from head injuries and reduce the severity of head injuries. That is why Cascade encourages individuals to wear a helmet, and why it requires them at its events, and why it provides them for free to youths in its programs.

However, helmets are not designed to protect people riding bikes from the most frequent cause of fatalities–being hit or run over by a person driving a motor vehicle. “There are many misconceptions about helmets, unfortunately,” a spokesperson for helmet maker Giro told CyclingIndustry.news. “We do not design helmets specifically to reduce chances or severity of injury when impacts involve a car.”

Unfortunately, deaths from vehicles hitting people walking and biking have risen nationally in recent years. Researchers point to several trends: distracted driving, more SUVs and larger vehicles on the road that have more blind spots and which inflict greater harm when striking individuals, and an increase in the number of miles being driven by Americans. In short, the behaviors of people behind the wheel and trends in American vehicle use pose the greatest danger to people on bikes.

A Dutch study showed that people wearing helmets are actually more likely to be injured when wearing a helmet. That’s because Dutch people rarely wear a helmet when bicycling to town, but they do wear helmets when mountain biking or riding competitively. Wearing a helmet, the researchers theorize, may induce people to take more risks when bicycling. The study shows how statistics can be misleading, and it illustrates how the issue of helmet wearing defies knee-jerk reactions and dogma.

So how do we make it safer to ride bikes?

The European nations of the Netherlands, Denmark, and Germany show the answer: protected and safe infrastructure, and policies that encourage more people–especially women–to ride bikes. In these three countries helmet use is extremely low, people ride more often than in the United States, but fatalities are much lower. In the United States, where the percentage of people who wear a helmet is far higher, the fatality rate is more than three times greater. This data shows that helmets are not the key to safe bicycling. This is why Cascade and Washington Bikes advocate for more protected bike lanes, more funding for safe bicycling infrastructure, and laws such as the Safety Stop.

Does that mean we should stop wearing helmets?

No! We will continue wearing ours, but it should be an individual choice. If safety is the goal, we should all focus our efforts on reducing the incidence of people driving motor vehicles striking people on bikes. Helmet laws have “distracted from the much more important work of designing safer streets and reducing motor vehicle speeds in cities,” says Streetsblog. This is why Cascade supports the effort underway in Seattle to reduce arterial speeds to 25 mph.

Washington Bikes encourages its members to do further research and reading. Helmets are not a panacea for safety. We acknowledge that Cascade advocated for the helmet law when it was implemented and that it will take education to undo the common assumptions about helmets and safety. The behaviors of people driving, however, appear to be highly relevant to the safety of people on bikes. This study shows that people driving are more likely to drive closer to people on bikes wearing helmets, while giving people not wearing helmets more space. Helmets, that study would indicate, cause people to drive more dangerously.

This question deserves discussion. The number of helmet citations has declined over the past decade, from a peak of 789 in 2011, down to 118 in 2019, and just 17 through June of 2020, the last date for which Campbell collected data. The reduction in tickets issued, however, does not mean police are stopping and questioning fewer people for not wearing a helmet. Just a fraction of stops result in citations, Campbell says. As long as the law is on the books, “there is nothing preventing the police department from increasing enforcement, and for those vulnerable populations it’s still an issue as long as this law is on the books,” explains Campbell.

At a time of budget cuts and national discussion about the role of law enforcement, is it the best use of limited resources to have police stopping and ticketing people for not wearing a helmet?

If King County repeals the law, could we replace it with incentives to wear helmets?

“Repeal and replace” is one of the issues being discussed by the Helmet Law Working Group. Ideas include education about the benefits of helmets, and incentives that would lower the cost of helmets. Virginia Tech runs one of the most respected helmet testing programs, and its top four rated helmets range in price from $50 to $240. Some individuals can’t afford that expense. Cars come equipped with seatbelts, making the decision to wear them easy. Bicycles do not come with helmets.

How can I get involved or learn more about the King County helmet law?

The King County Board of Health meets on the third Thursday of the month at 1 p.m., with the next meeting scheduled for March 18. People can give public comment thanking the board for adding the issue to their agenda and share their thoughts. Individuals can also email Board of Health members directly.

Pro bicyclist Phil Gaimon articulates the “victim blaming” attitude of the media and law enforcement when cars strike people on bicycles. We urge you to watch it.