When Our Work Succeeds, Washington Bikes. And That’s Our New Name!

No matter what changes, though, our work has always had one singular, inspiring vision: A future in which Washington Bikes.

The board has looked around the nation at advocacy organizations like ours and we see a growing trend: They are choosing new names that embody the goal of the organization—the very reason it exists. Groups that were initially called a coalition or a federation or an alliance have been choosing new names—strong, active statements that inspire you with the vision of what happens when our work succeeds.

As we announced at our 21st annual auction on Nov. 2, 2013, we believe a new name will both inspire people to get on board and contribute to our future growth and success. An action-oriented, goal-oriented name will invite in new partners, from individuals to businesses to entire communities, who appreciate the difference bicycling makes whether or not they ride themselves.

We’re going to make a strong statement of identity for the entire state of Washington as the culmination of all our work:

Because the Bicycle Alliance has worked every day since its founding to grow bicycling statewide, Washington Bikes. That’s the name you’ll know us by going forward, and it’s the vision that inspires us.

Where You’ll Find Us Online

Watch for our URL to change soon after a bit of site redesign. We’ll redirect from wabikes.org so you can find us at our new home on the Web. 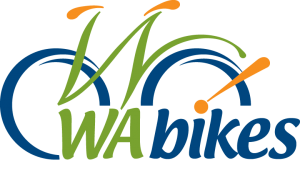