Washington votes to invest in bike-friendly policies and elected officials 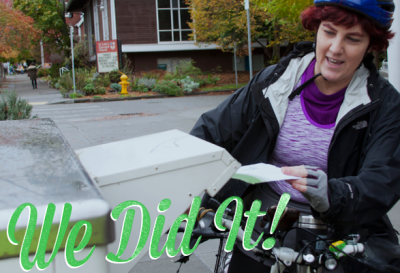 Voters sent the message that biking, pedestrian safety, and transit are important investments by passing three of the four ballot measures endorsed by Washington Bikes this election season. Sound Transit 3, Bellevue’s neighborhood transportation levy and Kenmore’s walkways and waterways bond are on track to be approved and implemented. Issaquah’s traffic improvement bond didn’t quite meet the 60% threshold needed for bond measure to pass (54.06% yes as of 11/22). Final vote counts will be available November 29, when elections are certified.

Regional Proposition 1 passed and will fund Sound Transit 3. The $54 billion plan will build 62 miles of light rail, add additional bus rapid transit, express bus and Sound commuter rail improvements. In addition to building light rail, the package includes $370 million funding improvements that make it easier to bike and walk to every station in the region.

This $370 million investment represents one of the largest commitments by a transit agency ever to make it easier to bike and walk to transit. It couldn’t have happened without the voices of caring neighbors regionwide who know that biking and transit go hand-in-hand together.

“ST3 makes a high priority of providing safe and convenient ways for people to bike and walk to transit, including unprecedented investments in pedestrian and bicycle facilities throughout the 116-mile light rail system and regional bus facilities that will exist after the program is built out,”   said Board Member & King County Councilmember Claudia Balducci of Bellevue.

This 20-year property tax levy will raise approximately $140 million for neighborhood safety, connectivity and congestion improvement; as well as sidewalk, bicycle, technology and maintenance needs. Notably, this levy would improve the potential for investments in Bellevue’s Bicycle Network. City of Bellevue staff are already working to develop project lists for years one and two, with a plan coming to the City Transportation Commission mid-December.

This $19.75 million bond measure will fund investments in five significant bicycle, pedestrian, and placemaking projects in the City of Kenmore. The Juanita Drive improvements will add bike lanes from Kirkland city limits north to 170th Ave (Simonds Rd.). An additional project will connect Safe Routes to Schools projects to downtown.

The $50 million bond measure would have invested in four projects across Issaquah focussed on safety and traffic calming. While the bond measure received the majority of votes in Issaquah (54.06% yes as of 11/22), it failed to reach the 60% threshold for passage.

Washington state voters also elected 15 of Washington Bikes 16 endorsed candidates for the state legislature. Washington Bikes looks forward to working with this bipartisan group of bike-friendly legislators in Olympia over the coming biennium.

Investments in safe streets, policies that encourage physical activity, and programs that grow a strong economy are valued statewide. We were proud to release the inaugural round of candidate endorsements that support these values. As more members in the state legislature look to biking to improve safety, health, and economic development statewide, Washington Bikes looks forward to growing its list of endorsements in the years to come.

In 2017, Washington Bikes will be turning attention to elections at the local level across the state. For more information about this process, contact Alex Alston.

Congratulations to the following state legislators!