Outdoor recreation to be counted in US GDP

In a major win at the federal level, the Outdoor Recreation Jobs and Economic Impact Act passed with unanimous, bipartisan support in both the House and Senate and was signed into law by Pres. Obama. As a result, for the first time ever the outdoor economy will be measured and reported in the nation’s economic report card the same way economists report on aerospace, IT, or agriculture. 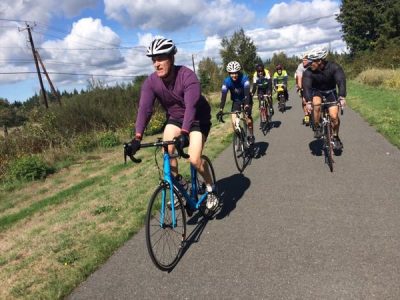 Rep. Rick Larsen making use of Washington’s outdoor recreation assets, on a ride with Snohomish and Skagit County bike advocates.

Momentum continues to build for recognition and investment in the outdoor economy. The 2015 economic impact analysis of outdoor recreation in Washington state highlighted this sector’s $22 billion annual contribution to the state’s economy. Bicycling provides ~$3.2 billion in direct expenditure; as the third most popular outdoor activity in the state, biking represents a cornerstone of the outdoor economy. 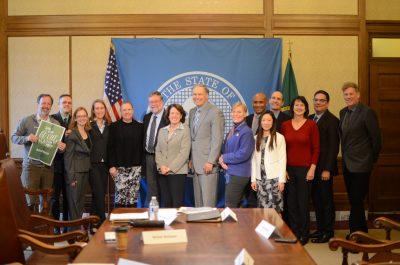 The Outdoor Industry Association lobbied hard for passage of the act; their report on its significance provides additional information.

Outdoor recreation is especially important in rural Washington, with jobs found in every county, every corner of the state, unlike some sectors that cluster their employment in major urban areas. At a recent meeting with outdoor interests as a follow-up to the 2014 Blue Ribbon Task Force on Parks and Outdoor Recreation, which I co-chaired, Washington Gov. Jay Inslee reiterated the value of Washington’s great outdoors for future healthy generations.

Projects like the US Bicycle Route System and promotion of bike tourism have led to increased interest from local leaders and economic development interests. We’ve spoken with people from Grand Coulee and Lincoln County, Union Gap and Republic, Snohomish County and the Snoqualmie Valley, Spokane to Olympia, Port Angeles and the Tri-Cities, about how to invite more bike travelers. Across the state, leaders want to welcome those wallets on wheels!

Our recommendation: Working for Bicycle Friendly Community status sends a strong signal that a destination will welcome bike tourists; Ellensburg touts its Silver BFC status in its tourism marketing materials. 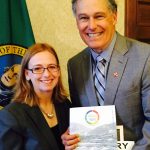 Wenatchee Valley Chamber of Commerce Executive Director Shiloh Schauer presented Gov. Inslee with the community’s new action plan. It includes a regional trail network as a top priority, with the Chamber taking the lead to move the network forward.

Trails in particular provide a destination asset — the more mileage in a trail system, the farther people will travel to experience it by bike and the more they spend when they’re on the trail. Washington Bikes works with advocates around the state to increase state investment in these valuable assets, from the John Wayne Pioneer Trail to the Olympic Discovery Trail to the Whitehorse Trail and beyond, along with investments in on-street bike networks for everyday riding in your hometown.

If you believe in the value of trails and bike tourism to grow our state’s economy, support our lobbying efforts for investment and policy to improve bicycling for all. With your donation you’ll be joining thousands of people who are riding with us!

This article was posted in Advocacy, Federal, Tourism, Travel and tagged tourism, trails. Bookmark the permalink. Follow comments with the RSS feed for this post. Both comments and trackbacks are closed.