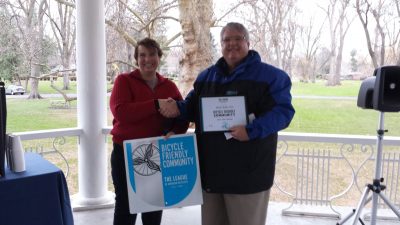 For Walla Walla, the seed for its designation as a bicycle friendly community was planted three years ago by City Engineer Neal Chavre in an e-mail to the city’s Bicycle and Pedestrian Advisory Committee (BPAC) chair: yours truly.  The time for action, however, didn’t come until the summer of 2015 when cycling enthusiast, retired US Air Force veteran, and League of American Bicyclists member Jeffrey Fritts offered his help to the Bicycle and Pedestrian Committee.  Jeffrey researched and presented on the application requirements and process to the BPAC and to City Council with the recommendation to apply. Through discussions of the potential for a joint application of the Valley’s metropolitan planning area, the initiative lost some momentum and missed that year’s application deadline.

Application plans found new life in March of 2016, when Barb Chamberlain, Chief Strategic Officer of Cascade Bicycle Club and Washington Bikes, invited me to the Washington Bike Summit in Tacoma.  The session on seeking Bicycle Friendly status spurred the spirit of competition in me. So the race was on!  I worked with community partners, groups, cycling advocates, and city staff and leaders to demonstrate Walla Walla’s progress in the main application categories; education and encouragement; engineering; safety and enforcement; and evaluation and planning.  Thanks to much input and support, the application was signed, sealed, and delivered in time for the August 2016 deadline. In November, we learned that Walla Walla had received a Bronze designation and officially became the 17th Bicycle Friendly Community in Washington, the #1 bicycle friendly state!

So what does a Bicycle Friendly Community designation mean for Walla Walla?  I think of this designation as an affirmation of the work that has already been done by so many in our City. That we have a Bicycle and Pedestrian Advisory Committee and a Bicycle and Pedestrian Plan are a few obvious examples. Safety signage, especially on county roads; the Tour of Walla Walla; community support for two local bicycle shops; numerous varied riding groups; the Whitman College cycling team; and Bicycle Benefits, a bicycle and business friendly program, are further evidence of cycling’s enduring appeal to many in Walla Walla. The designation also serves as a starting point for a renewed and continued focus on bicycling education and safety in our City. Bicycle Friendly cities tend to be destination cities for bicycle tourists, bringing with them additional economic benefits.

The impacts of encouraging and facilitating cycling on health and sustainability should not be overlooked either. Cycling is not only a rewarding and multifaceted recreational option, but it can also be a viable alternative to motorized transportation. Statistics from the 2009 National Household Travel Study reveal that most school, work, and errand trips are less than ten miles and 22 percent of trips are under four miles. If even a fraction of the 22 percent of trips under four miles were taken by bicycle instead, our community would benefit from improved parking and traffic conditions, especially in the downtown core. In Walla Walla, every Valley Transit bus is outfitted with bike racks, making creative commuter options possible.  Bicycle commuters benefit from improved health and financial savings.  Finally,  the environment can benefit at the most fundamental level through a reduction in carbon emissions.

Capitalizing on the positive benefits that the Bicycle Friendly Community designation can have for Walla Walla is now up to us. As leaders, policy makers, taxpayers, parents, educators, environmentalists, law enforcement, and bicycling advocates and enthusiasts, we have a framework and tools to continue to make a positive impact on our health and quality of life in Walla Walla through bicycling. I hope, in four years, to submit an application that shows progress in our efforts and to achieve a Silver (or higher!) designation.

About the League of American Bicyclists Bicycle Friendly America Program

The League of American Bicyclists was founded in 1880 to improve road conditions for, and acceptance of, cyclists.  Since then, the League has continued with the vision to encourage and facilitate “a nation where everyone recognizes and enjoys the many benefits and opportunities of bicycling.”  It is in fulfillment of this vision that the League offers the Bicycle Friendly America program. This program awards cities recognition tiered from bronze up to platinum with a designation that lasts for a four year period.  Each designation includes a report card and recommendations for achieving the next award level.

This article was posted in Advocacy, News, Walla Walla and tagged Bicycle Friendly Community, WA Bike Summit, Walla Walla. Bookmark the permalink. Follow comments with the RSS feed for this post. Both comments and trackbacks are closed.