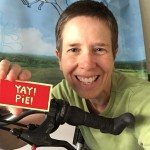 A.V. Crofts is a bi-coastal educator, biker, pie baker, and writer based in Washington and Maine. She is on faculty at the University of Washington, rides a Trek 7500, and her favorite pie is her mother’s apple.

I sold my car two years ago and my bike became my ride.

The shift came with all kinds of freedom: parking, traffic, and buckets of savings on car insurance, gas, and maintenance. I also get to eat like a horse and burn it off on my commute.

But for all the benefits, a few challenges presented themselves when four wheels become two. One of them involved dessert. Pie, in particular.

As a pie maker, the safe transport of a freshly baked pie on my bike has particularly vexed me. Seattle’s hills are not gentle on a pie.

The answer, I discovered, was a dabba.

Dabbas, the stainless steel stackable lunchboxes most widely used in India, have starred in recent films like The Lunchbox or the documentary The Dabbawallas, featuring the astonishing network of 4,000 delivery men (dabbawallas) who deliver more than 100,000 lunchboxes daily to offices across Bombay.

Many years ago, friends gifted me with a personalized dabba from Bombay. Until lately it was a patient presence in my kitchen, awaiting action that never came because my leftovers required a microwave’s touch.

One morning I had a flash of inspiration: what if I baked personalized pies in each of the dabba layers? What if, after they baked and cooled, they were stacked, tucked into my bike basket, and served as is at the dinner party?

The inaugural pies were a mixed berry trio of raspberries, blackberries, and blueberries. This particular dinner party was an intimate affair, so I baked off three individual pies in the oven in their dabba layer and let them sit until they came to room temperature. I then assembled my dabba and hit the road. 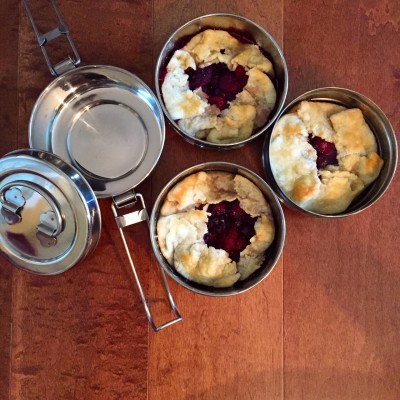 My first transport test was the five miles from my home to the University of Washington Seattle campus. I checked the pies upon arrival at work—perfect. They remained unscathed from the elevation gain from the Burke-Gilman Trail to the Upper Fremont dinner party destination, where I triumphantly handed over the dessert dabba to my hosts. We ate them under an outdoor canopy. All that was required was forks. 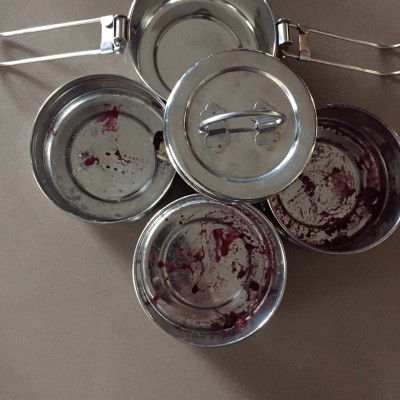 When dessert is finished, stack the dabba and pedal it home! Fewer dirty dishes for your dinner party hosts. (Photo A.V. Crofts)

That’s one of the keys to reveling in the biking life: it might take me longer to reach my destination, but I’m happier (and hungrier) when I get there. Especially when I arrive with pie.

What techniques do you employ when transporting food, flowers, or other delicate items by bike? Please share by posting a comment.

This article was posted in Food, Guest Blogger, Transportation and tagged bike commute, carrying stuff, food, Seattle, transportation. Bookmark the permalink. Follow comments with the RSS feed for this post. Both comments and trackbacks are closed.