Need bike parking? Ask for it!

Katie is a long-time bicyclist whose riding has cycled through bike commuting to ultra-distance road riding to road racing and back to commuting, this time with a preschooler in tow. In 2011, Katie served as an AmeriCorps volunteer at what was then called the Bicycle Alliance of Washington (now Washington Bikes), and followed that tenure up with a yearlong stint as a teacher trainer on the Safe Routes to School grant. Now Katie squeezes in a little part-time work at a wealth management firm between bike commuting to preschool and the occasional 100-mile weekend ride. In the following story, you’ll spot two of her five bicycles and see two different ways of transporting a young child by bicycle. This story first ran on Katie’s personal blog.

We’ve started consistently riding our bike to B’s preschool, thanks to the unseasonably dry and pleasant weather. On Tuesday, I drop B off, unhook the trailer, go ride hill repeats for an hour, then, when school is over, hook the trailer back up and ride us home again. It’s a nice system.

Thus far, I’d parked our rig in the entryway, where it’s dry and a little more secure. I tend to leave things like helmets and extra clothes in there, and anyway, there was no external bike parking — more on that in a bit. 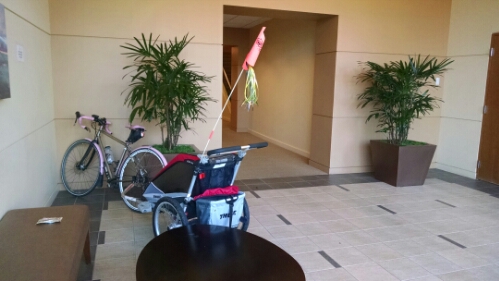 Parked inside at B’s school

Today when I pulled up, this sign greeted me.

In case it’s hard to read, it says, “BICYCLES ARE NOT PERMITTED INSIDE THE BUILDING.” Very friendly and collaborative, and particularly amusing for a building that doesn’t provide any bike parking whatsoever, not even a rack outside in the rain.

Here’s what I decided to do:

My note says, “I would love to use a bike rack, if you would provide one. I would love to discuss it more – covered would be helpful.” And I signed my name and phone number. Not my most eloquent missive, granted, but hopefully not inflammatory, either. I really would use an external rack, especially a covered one, but there are none.

In fact, there aren’t even any sign posts or other handy stationary objects to lock up to. I can lock my bike to itself and put the brake on the trailer, but that really won’t stop someone from stealing the bike or trailer. I like parking inside because it’s much more secure, just by virtue of having fewer people go through there. In any case, I don’t think requesting a bike rack is unreasonable.

I mentioned this nasty-gram note to the receptionist at the front desk at B’s school when I borrowed her sticky note and pen on my way out to ride hill repeats. When I returned an hour later, she said that the school director would request a bike rack. She pointed out that there are lots of paths around (indeed, our route is probably 75% multi-use trails), so it’s not unreasonable to provide parking for bikes. I was touched that they would go out of their way like that for us, and I thanked her profusely.

For now, when we ride, I may park just outside the front doors and lock my bike to itself. Hopefully that will suffice. It is a tad frustrating to get kicked out of a building when we weren’t in anyone’s way or making a mess, or, in fact, doing anything but using some otherwise empty space. Oh, and we did make lots of kids happy just by the presence of a bike. We’ll see what happens.

Remember back in March when we started biking consistently to B’s preschool, and we got a nasty sign put up telling us not to park in the building? At the time, the wonderful folks at the school asked the building manager to put up a bike rack. I appreciated the gesture but figured we wouldn’t be around to benefit whenever the each went up.

How wrong I was! Today when we arrived at school, we saw a new bike rack installed! And, as icing on the cake, it was just in the perfect spot, covered and near the front door. Here’s a picture of the rack: 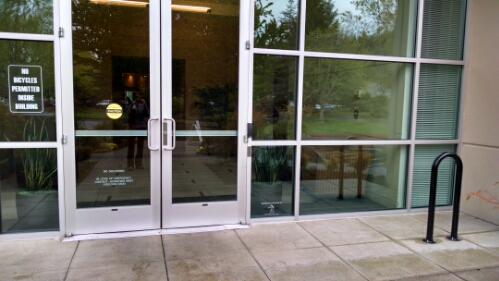 At left, the new, permanent no bikes sign; at right, the new outside bike rack.

And here’s our cargo bike setup (by the way, highly preferred by the passenger – much better visibility for him), locked securely in its nice, dry spot. 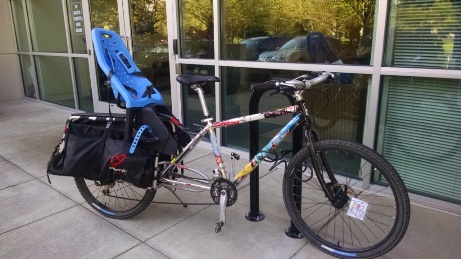 I’m quite grateful for a positive resolution. Definitely the best outcome I would have hoped for.

My take-away: It wasn’t the note I left that made a difference. That just got taken down immediately, and ignored. It was when the powerful school director – whose school occupies a large portion of the building and, I assume, is an important tenant to the management company – called up and asked for a rack that change happened, and happened quickly. Lesson? Sometimes it’s most effective to find where the power is and have them apply pressure. Even for small changes, influence matters. That, and I’m fortunate that this all went down with two organizations that were so astonishingly supportive.

This article was posted in Accessibility, Advocacy, Bike Parking, Commuting, Guest Blogger and tagged bike commute, bike parking. Bookmark the permalink. Follow comments with the RSS feed for this post. Both comments and trackbacks are closed.