By the spring of 2012, I had a 1st grader and a pre-schooler that were both riding solo on two wheels when they weren’t hitching rides on our cargobike for daily errands. I knew a few other pedal parents through our school and neighborhood who liked to ride with their kids, and when I pitched them the idea of Kidical Mass, they agreed that Tacoma was ready for an organized group ride for kids and families. There was talk, but another summer came and went.

At the beginning of 2013, my wife and I decided to launch Kidical Mass Tacoma ourselves that spring with a kickoff ride in May as part of the City’s Bike Month promotion. I put up a placeholder on my personal blog and started brainstorming ride ideas. We needed fun places to start and finish with a calm and flat route in between.

The only minor complication with Bike Month is that the City requires a certificate of liability insurance for any event that is promoted on their calendar. The Tacoma Wheelmen’s Bicycle Club was sponsoring several of the Bike Month rides with a special event rider on their own policy by having a club member act as ride leader. I had recently renewed my family membership and they we’re happy to cover our event, too. 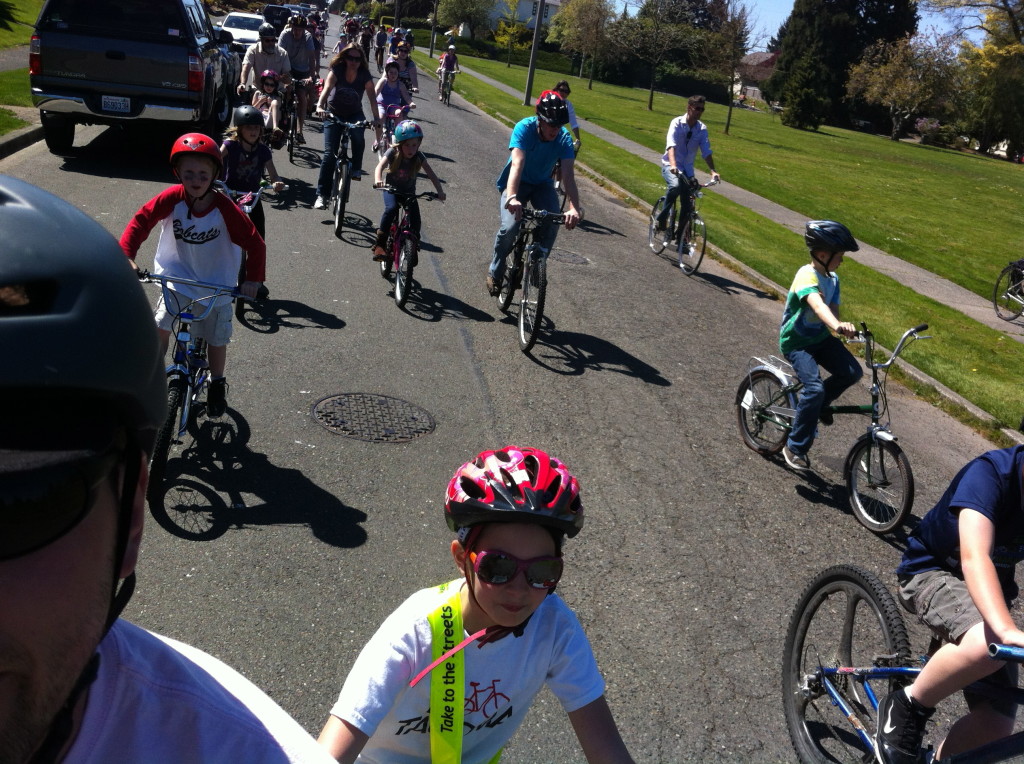 Our first ride was a huge success. We had nearly 60 riders, including a few volunteers to help as arterial crossing guards and Jeff’s Ice Cream, a local small business. Jeff had built his own bicycle ice cream trailer which he pedaled through Tacoma neighborhoods peddling made-in-Washington ice cream bars. It was a scorcher of a day and the free ice cream (paid for by a few families) was a huge hit. I asked Jeff if he could be available for our monthly rides for the rest of the summer and, it turns out, a tradition was born. 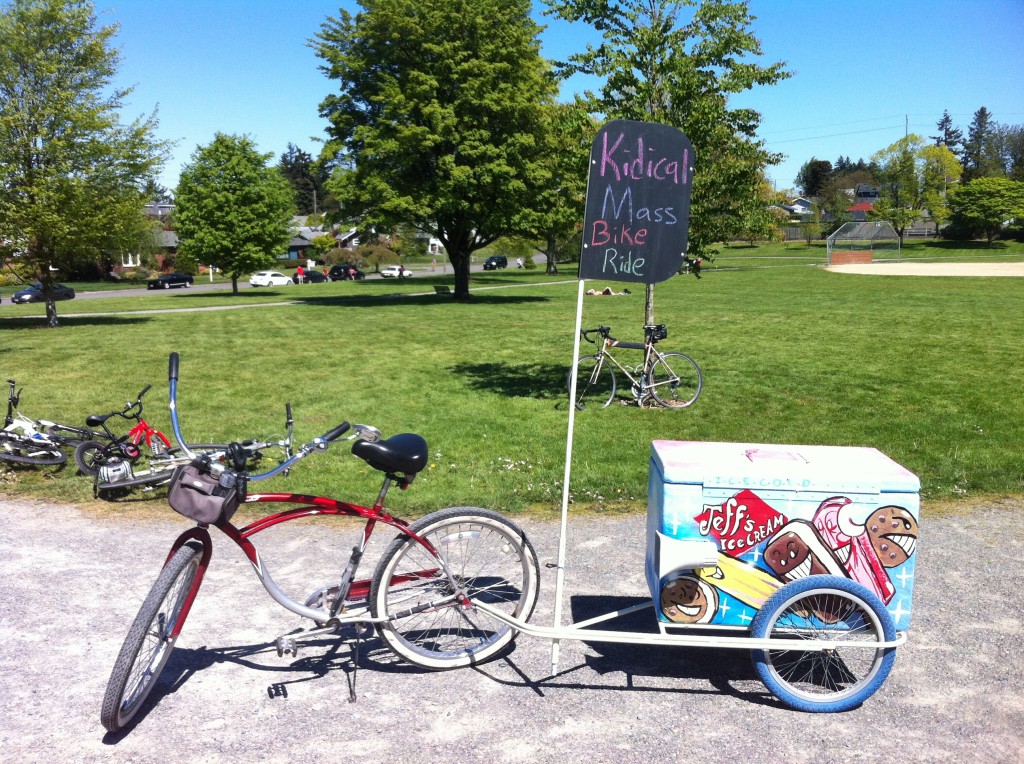 The TWBC liked what they saw. Getting the youngest demographic involved in biking is tricky and there simply wasn’t always a venue to support it in Tacoma. Kidical Mass was a program that fit well with their club goals so they offered to continue insuring the events for the rest of the first summer at the club’s expense. It was important that the ice cream remain free to our participants and a few parents quietly volunteered to pay for everyone’s treats. 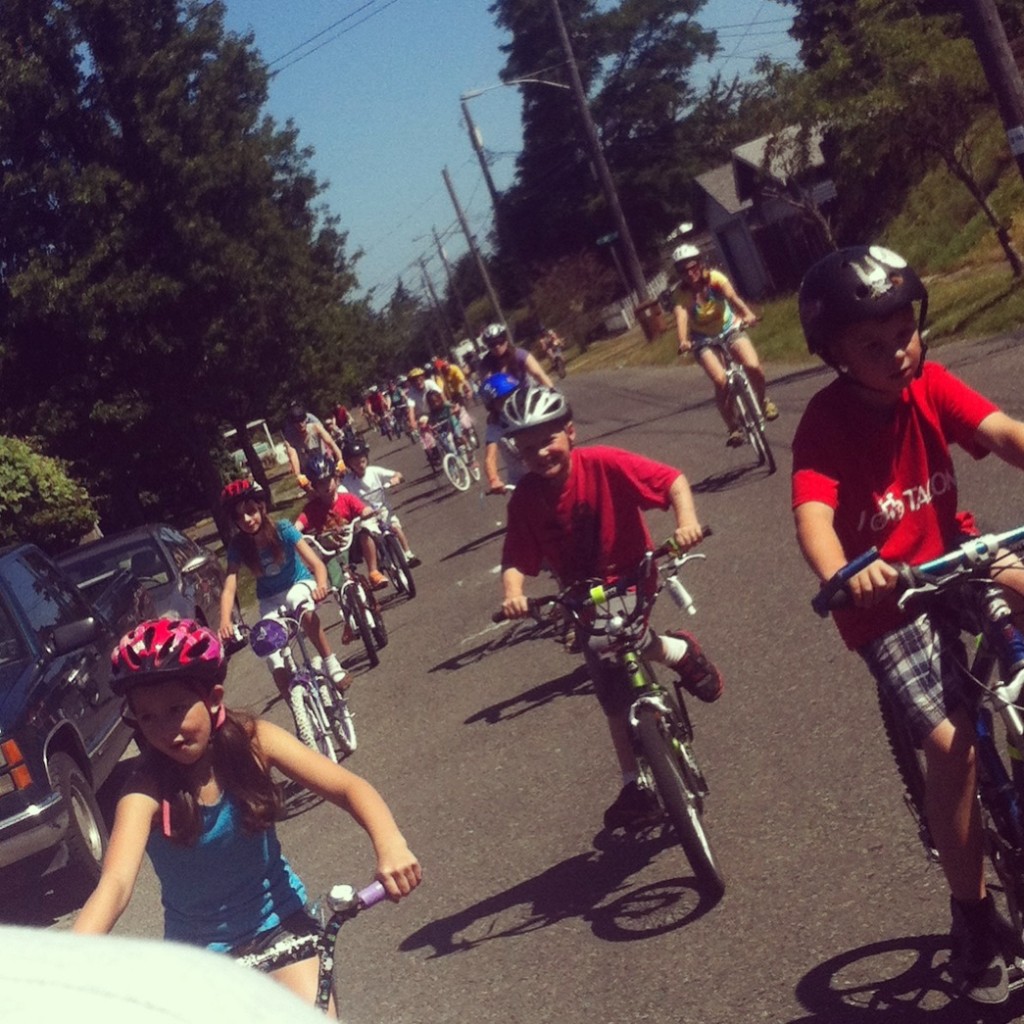 We rotated the rides through various neighborhoods that summer, blogging the details and placing posters in bike shops and libraries and community centers. Each ride brought 20-40 folks and more free ice cream. We learned how to make spoke cards! Even MetroParks Tacoma was hearing good things about our rides, so they asked us to lead a short ride for kids and families during Downtown to Defiance, a first-of-its-kind event for Tacoma. It was a very wet and rainy day, but 100 riders of all ages and abilities still showed up to ride a brand new section of trail near Point Defiance Park. Tacoma families were more eager to ride than anyone expected. 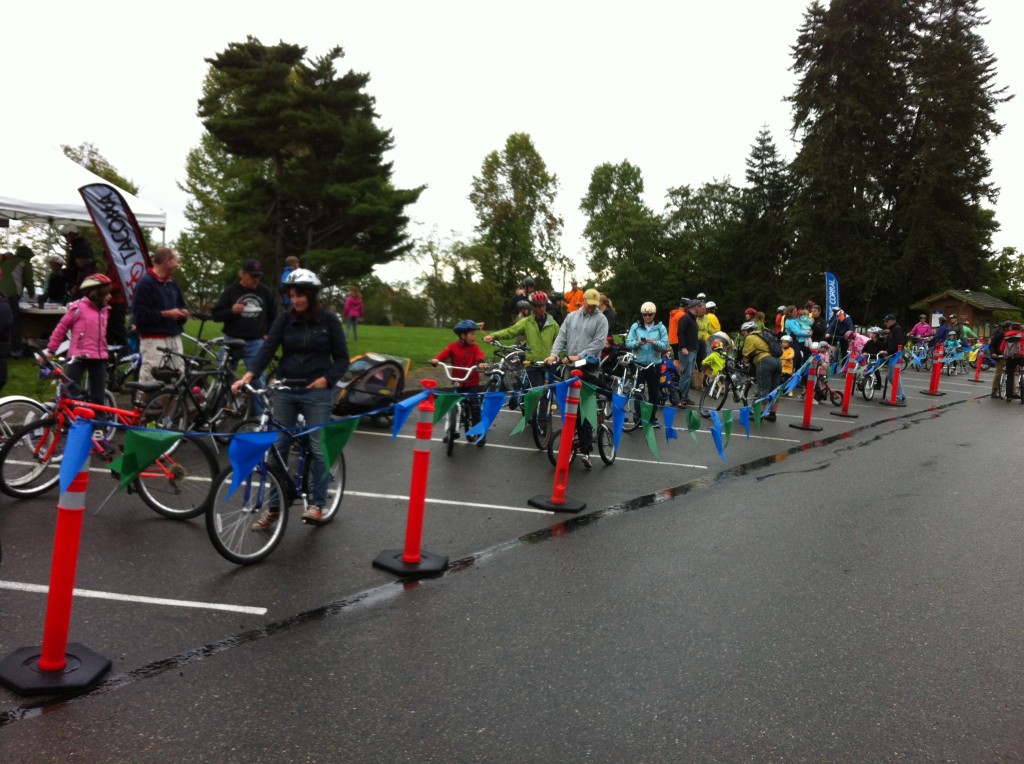 I presented the results of our first Kidical Mass summer at the quarterly TWBC meeting to say thanks for their support. Club members were blown away at our attendance numbers and smiling heartily at all of the anecdotal things I’d heard from kids about how much they enjoyed riding together in the street. And Jeff’s Ice Cream! Club members understood the importance of the ice cream as a snack, a reward and an element of fun.

The Tacoma Wheelmen’s Bicycle Club wanted Kidical Mass Tacoma to continue under their banner of sponsorship. Our cost proposal was quickly approved at their winter board meeting. Not only were they going to pay for ice cream and promotional items like spoke cards, but they wanted to grant complimentary club memberships to participating families so that we could continue to have additional liability insurance coverage for our rides. The need for insurance coverage isn’t a large concern to a group that only rides four or five miles each month, but the TWBC board members have logged thousands of miles and have too many stories to leave this issue to chance. 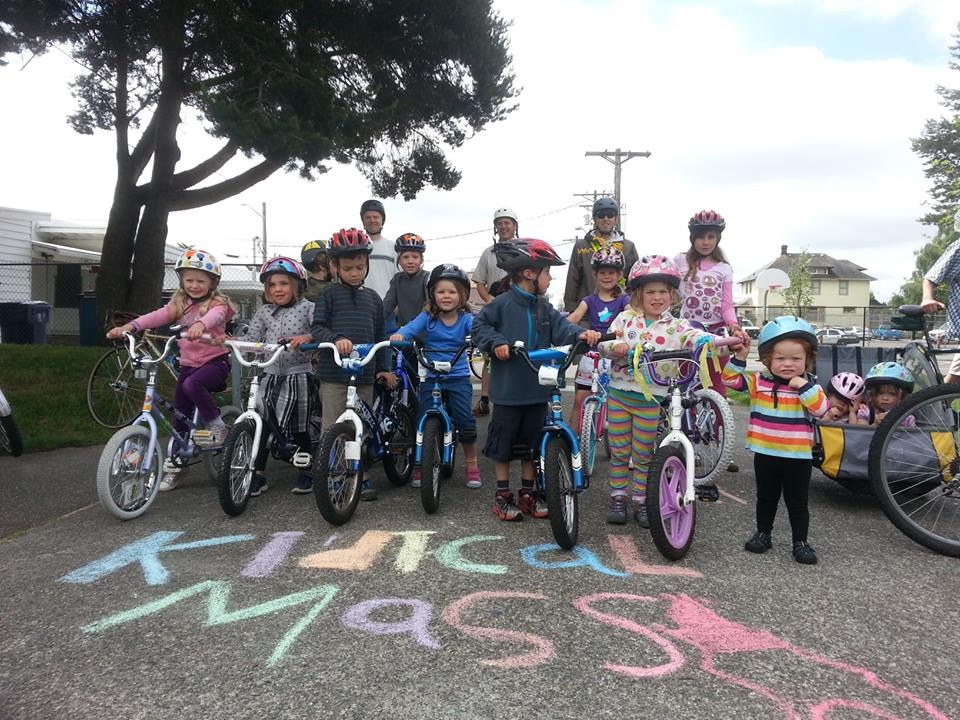 For the 2014 season, we started a separate Kidical Mass Tacoma blog where we post details for upcoming rides. We promote those rides through Facebook, Twitter and Bike253.com, a local bike event calendar. Jeff continues to ride along with us and we’ve also partnered with other organizations and businesses in the neighborhoods where we ride. The Tacoma Public Library did a thorough job of helping us with a ride to promote summer reading and an appearance by FabLab Tacoma’s FabLorean pedal car time machine at the end of our Hilltop ride was fantastic. 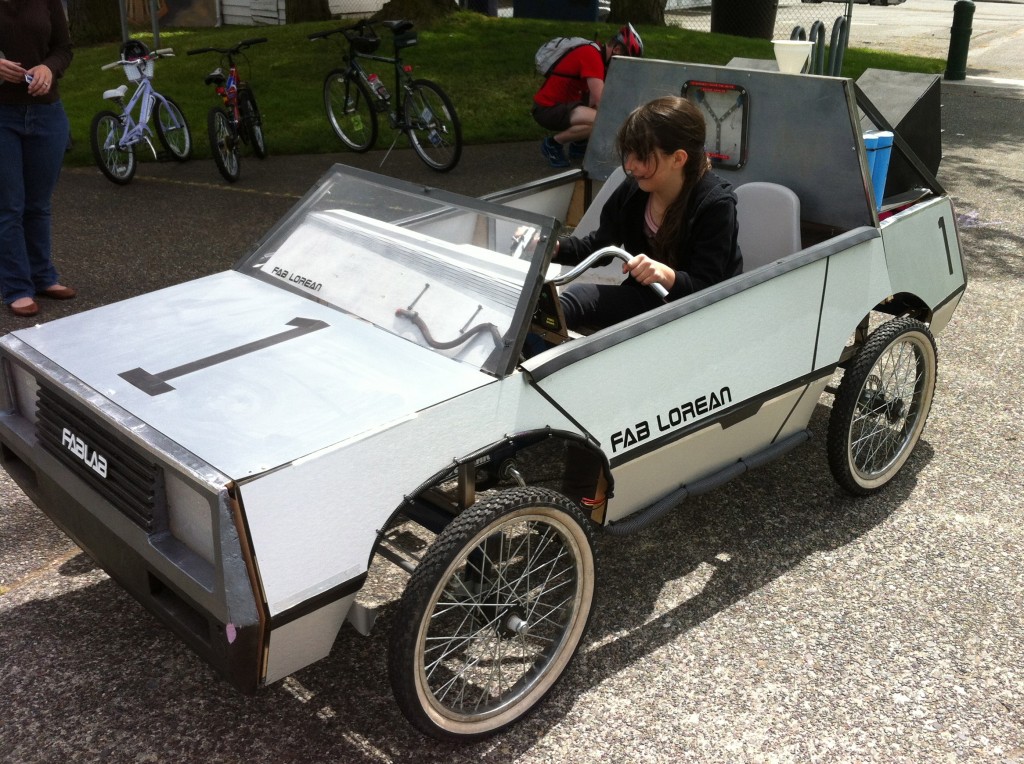 Parents seem understanding of the insurance requirement when they sign-in at the beginning of each ride. As they take a clipboard, the kids grab an I Bike Tacoma bandana to decorate, some of the leftover Bike Month swag donated by the City of Tacoma. The bandanas are handy for keeping riders cool on hot days, and for wiping the melted ice cream from a grinning chin. 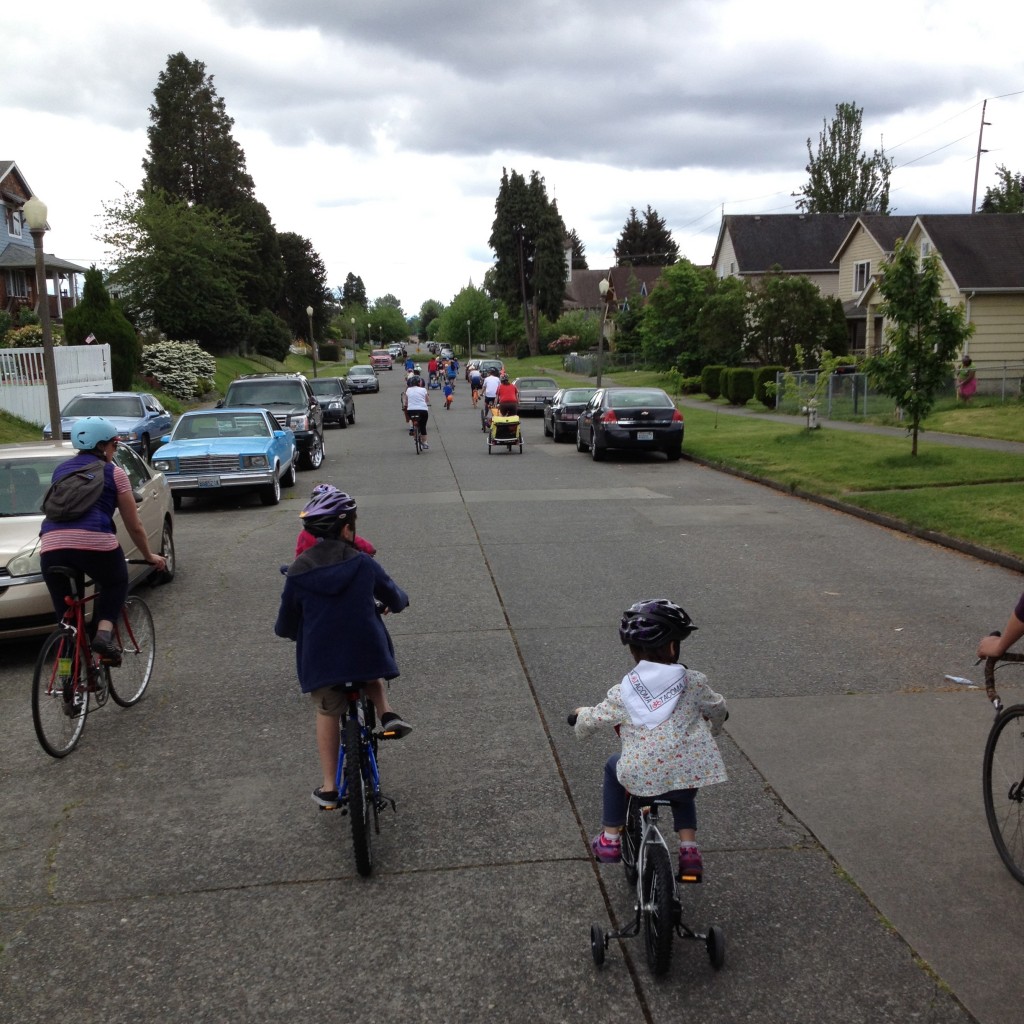 For more information about how you can organize a Kidical Mass family bike ride in your community, visit kidicalmass.org.

This article was posted in Bike Clubs, Bike Culture, Encouragement, Family biking, Kids, News, Pierce County, Rides, Tacoma and tagged Kidical Mass. Bookmark the permalink. Follow comments with the RSS feed for this post. Both comments and trackbacks are closed.