Kidical Mass: Kids are traffic too 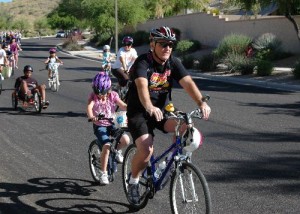 Parents who bike often want to share the cycling experience with their youngsters. Kidical Mass provides them with a fun, safe and social way to do it.

The first Kidical Mass was launched in 2008 in Eugene, Oregon, and it has since spread to over two dozen communities—including several in our state. These bike rides through a neighborhood or community are kid-friendly, not very long, and often feature stops at someplace fun.

Kidical Mass rides offer children a safe and friendly environment to learn how to ride their bikes. It also increases public awareness and visibility of family biking. Kidical Mass is not a Critical Mass for kids—these rides are law abiding rides and meant to teach children how to safely ride on streets and trails.

Interested in starting a Kidical Mass ride in your community? Check their FAQs for tips on how to get a ride started, then invite the kids and their parents! 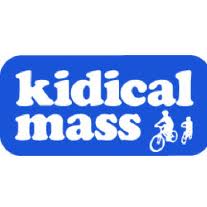 This article was posted in Bike Culture, Education, Encouragement, Events, Kids, Safe Routes to School, Seattle, Spokane County, Tacoma and tagged Kidical Mass. Bookmark the permalink. Follow comments with the RSS feed for this post. Both comments and trackbacks are closed.