Activists turn out for Transportation Advocacy Day in Olympia 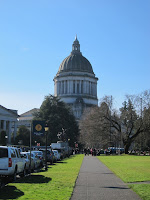 Over 100 citizens descended on the state Capitol last Thursday for Transportation Advocacy Day (TAD).  Folks arrived on foot, by bike, transit, train and carpools to Olympia for this annual event.

After some light breakfast treats, networking and a welcome from Bicycle Alliance ED Barbara Culp, attendees heard from Paula Hammond, Washington State Secretary of Transportation.  Hammond highlighted the department’s accomplishments, then outlined the challenges they face.  Among them are decreased funding and uncertainty at the federal level.

This was followed by several concurrent breakout sessions designed to better educate and prepare the advocates for the day ahead.  Bicycle Alliance Policy Director, Dave Janis, co-led a session with a representative from Cascade Bicycle Club on the bicycle bills in the state legislature.

Then the advocates were off to the Capitol campus to attend meetings with their legislators, sit in on committee meetings and attend public hearings.  They were there to experience state government in action and to be part of it as citizen advocates.

The Bicycle Alliance was well represented at TAD with 6 staff and 8 board members participating this year.  Advocates traveled from all across the state for the event.  There were attendees from Spokane, Walla Walla, Vancouver, Bremerton, Seattle, Everett, Tacoma, and points in between.

This article was posted in Advocacy, Complete Streets, Education, Events, Funding/Policy, Issues & Advocacy, Politics, Transportation. Bookmark the permalink. Follow comments with the RSS feed for this post. Both comments and trackbacks are closed.