What does a Representative from Florida have to do with Washington State transportation? The answer: EVERYTHING. 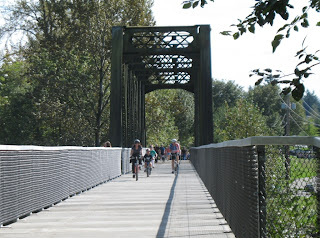 Representative John Mica (R-FL), House Chair of the Transportation and Infrastucture Committee, travels to Washington on Monday, February 21st for one of a series of 14 national field hearings and public forums on the pending major surface transportation legislation.  The hearings with state and local officials and transportation stakeholders will help inform the Transportation and Infrastructure Committee’s drafting of a long-term reauthorization of the nation’s highway, transit, highway safety programs. The previous multi-year law (SAFETEA-LU) expired in September, 2009.

Representative Jaime Herrera Beutler (R-WA), from the 3rd Congressional District (Southwest WA) who also sits on Transportation and Infrastructure Committee with Representative Mica, will host the public hearing at the Vancouver PUD, 1200 Fort Vancouver Way, Vancouver from 9 to 11a.m. on the 21st of February. Eight officials have been invited to speak and then it will be open to the public for testimony.

The Bicycle Alliance is calling on bicyclists and pedestrians in the 3rd Congressional District to attend the hearing or submit written copy to Representative Herrara this week and make two critical points:

Here are a few reasons why we should support biking and walking:

This article was posted in Advocacy, Funding/Policy, Issues & Advocacy, Politics, Transportation, Vancouver. Bookmark the permalink. Follow comments with the RSS feed for this post. Both comments and trackbacks are closed.