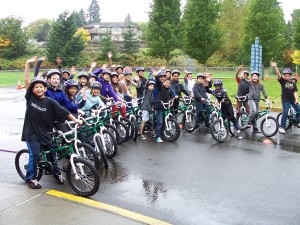 HB 1045, Neighborhood Safe Streets Bill passes! At literally the last minute before the policy bill cutoff on April 17, Senator Andy Billig helped usher in a special order of business to make Rep Cindy Ryu’s HB 1045 the 4:59 bill in the Senate (the last policy bill voted on). We’re elated to get this smart legislation passed, which gives cities and towns across Washington state the authority to lower speeds to 20 miles per hour on neighborhood streets–all while cutting red tape.

SB 5263, Concerning motorcycles overtaking and passing pedestrians and bicyclists. While originally not included in this legislation, an amendment facilitated by the Bicycle Alliance and Cascade Bicycle Club and introduced by Senator Christine Rolfes added a 3-foot passing distance requirement for motorcycles overtake bicycles and pedestrians in the travel lane. This legislation provides everyone who supports sharing the road an important and incremental start to develop a uniform safe passing law that incorporates a 3-foot passing requirement. After passing with no opposition, this bill now sits on the governor’s desk for signing.

The transportation budget and revenue legislation is gaining clarity, but resolution for when agreement will occur between the House and Senate remains uncertain.

Transportation Budget. The AP reports that the House and Senate negotiations appear to have reached agreement on a two-year transportation budget, which could be voted on Sunday. Until the final vote occurs, we will continue to monitor the status of investment levels for the Bicycle/Pedestrian Safety & Mobility Grant Program, as well as the Safe Routes to School Grant Program. The Bicycle Alliance has been working to ensure that Safe Routes to School Grant Program investments are restored to their pre-MAP-21 federal funding levels and that a 1935 gas spillage tax exemption is removed to fund safer streets for kids.

Transportation Revenue Package. With our Transportation for Washington Partners, Bicycle Alliance has coordinated and provided testimony in the past week for the House and Senate proposed 12-year transportation revenue packages. Our message is simple: support the amendments offered by Representative Marko Liias, which would invest $100 million upfront in the backlog of statewide walking and biking projects while then providing $100 million and $50 million respectively for the Bicycle/Pedestrian Safety & Mobility and Safe Routes to School grant programs over the following ten years. Please contact your legislators to voice your support for increased investments in walking and biking.

And, just in case you’re wondering, this proposed revenue package does not include a bike fee.

What didn’t make it?

The Bicycle Alliance introduced a Safe Passing bill that would have provided more flexibility for motor vehicle drivers to safely pass people biking or walking. Despite the bipartisan sponsorship, the bill faced some concerns in the Senate Transportation Committee and was ultimately held by its sponsors. In the interim leading up to the 2014 legislative session, the Bicycle Alliance will be working with our partners to ensure that all sides better understand the legislation moving forward.

Additionally, legislation to add health as one of the state’s transportation system policy goals failed to make it out of the House this year. We look forward to working on that next session.

Barring unforeseen resolution on a host of budget and revenue issues where significant divides still exist, the legislature will be called into a special session as early as next week to resolve its outstanding differences. We’ll stay with it through the entire process to continue our work to expand funding for bicycle infrastructure.

This article was posted in Advocacy, Alert, Funding/Policy, Health, Infrastructure, Issues & Advocacy, Kids, Legislature, News, Safe Routes to School, Safety, Transportation. Bookmark the permalink. Follow comments with the RSS feed for this post. Both comments and trackbacks are closed.