Every spring, there is a brief window between Washington State Department of Transportation starting to plow Highway 20 and opening it to car traffic during which the road becomes a cyclist’s paradise. For a few sweet weekends at the end of April and beginning of May, you can ride with no cars and barely another soul around from the west-side closure gate nearly 23 miles up to Rainy Pass or the east-side closure gate 8 miles up to Washington Pass and beyond. 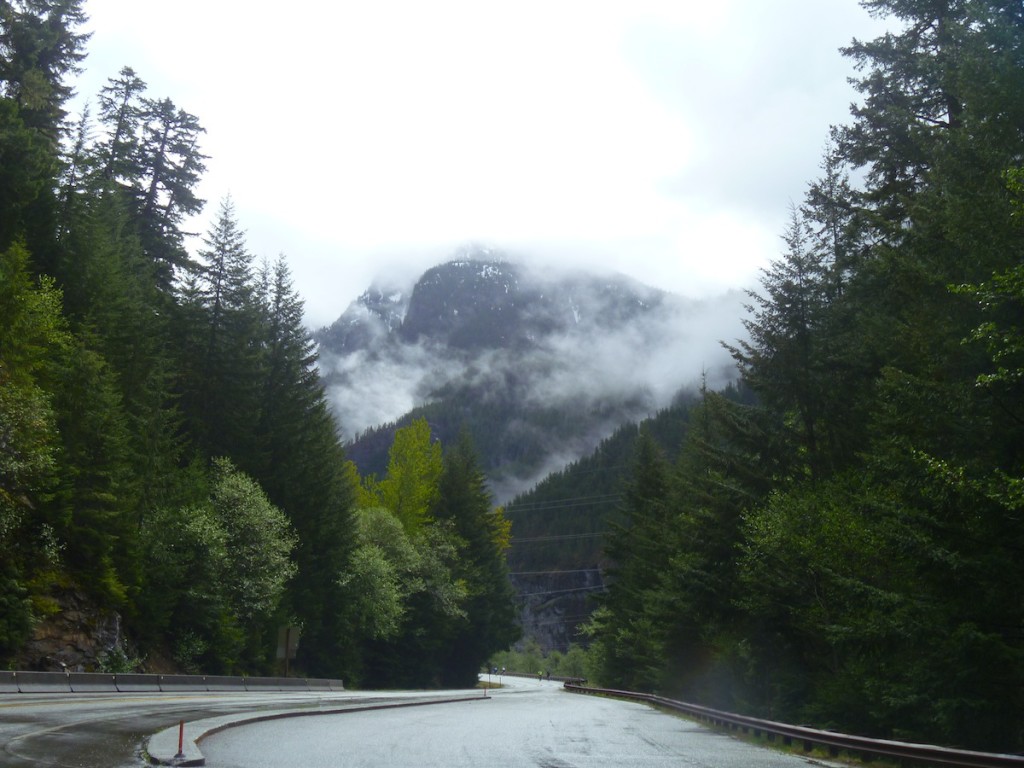 The car-free view up the North Cascades Highway

Riding a car-free North Cascades Highway has been on my cycling bucket list for several years now. A beautiful, challenging ride past raging rivers, expansive lakes, towering mountains, and lush green forests is wildly appealing on its own. To do a mountainside ciclovia without concern for passing cars or a need to stay in the shoulder is the dream. This year I was determined to check the ride off my list.

As early as March, I became a regular on the WSDOT website’s North Cascades plowing progress page and a devotee to their daily email updates. The goal is to do the ride on the last weekend before they open it to cars so that you can ride as much road as possible. I recruited six friends to join me on the ride (not a difficult pitch, it turns out). We decided on Sunday, May 4 and made plans for an early departure from Seattle. 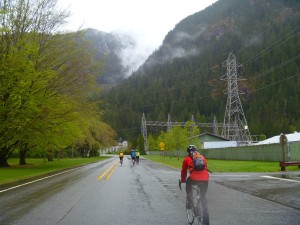 We left the city at 7:30 and headed towards Newhalem, a tiny Seattle City Light company town on the North Cascades Highway, 12 miles west of the highway closure gate. After a quick change of clothing and final survey of gear, we set out from Newhalem under gray, foreboding skies.

The scenery along 20 is stunning from the get go. Leaving Newhalem, the bright-green foothills of the Cascades spanned our field of vision—a preview of the climb that lay ahead. The road takes you past Gorge Lake, then Diablo Lake, then Ross Lake, all man-made reservoirs created by dams on the Skagit River, but nonetheless beautiful, framed by mountains on all sides. Above the lakes, the Skagit was a raging, brown torrent spilling down the pass, unfettered by human interference. 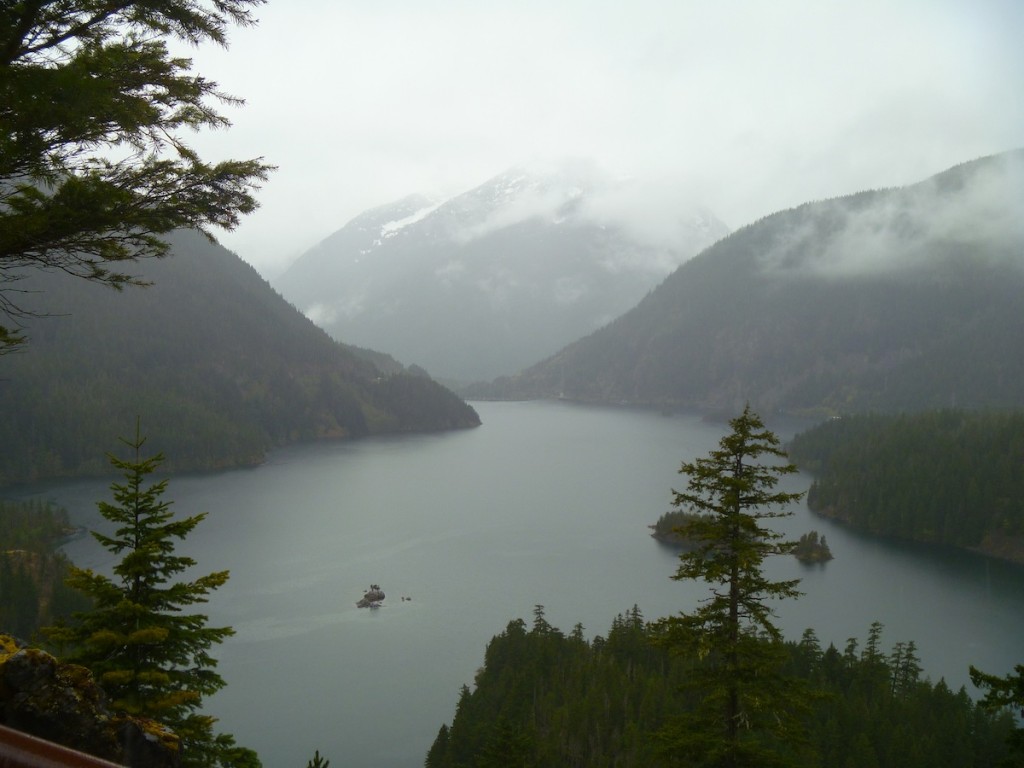 Ross Lake – framed by mountains on all sides

As we made our way to the closure gate it seemed as though the forecasted 100 percent chance of rain might not materialize. But just 45 minutes into the ride, the skies opened up and shifted from back and forth from steady drizzle to pounding rain the rest of the day. On the bright side, the downpours buoyed the dozens of snowmelt waterfalls and creeks cascading off of the hillsides along the road.

The ride to Rainy Pass is never terribly steep. If you believe Strava, it is a 2- to 6-percent grade the whole way to the top. There are even several multi-mile sections of downhills and plateaus on the way up. Mostly it’s just a steady, seated grind for hours and hours. I found myself shifting into a harder gear at times just to stand and climb for a little variety (and a little reprieve for my tired butt).

A little less than four hours after we’d set out from Newhalem, we’d reached the end of the road. Sadly, the snowline was still about a mile west of Rainy Pass, but I was plenty happy to be done with the climb. We spent a few minutes celebrating, filling up on snacks, and donning jackets, vests and heavy gloves for the ride back down. The sun almost forced its way through a tiny blue patch in the clouds to celebrate with us. 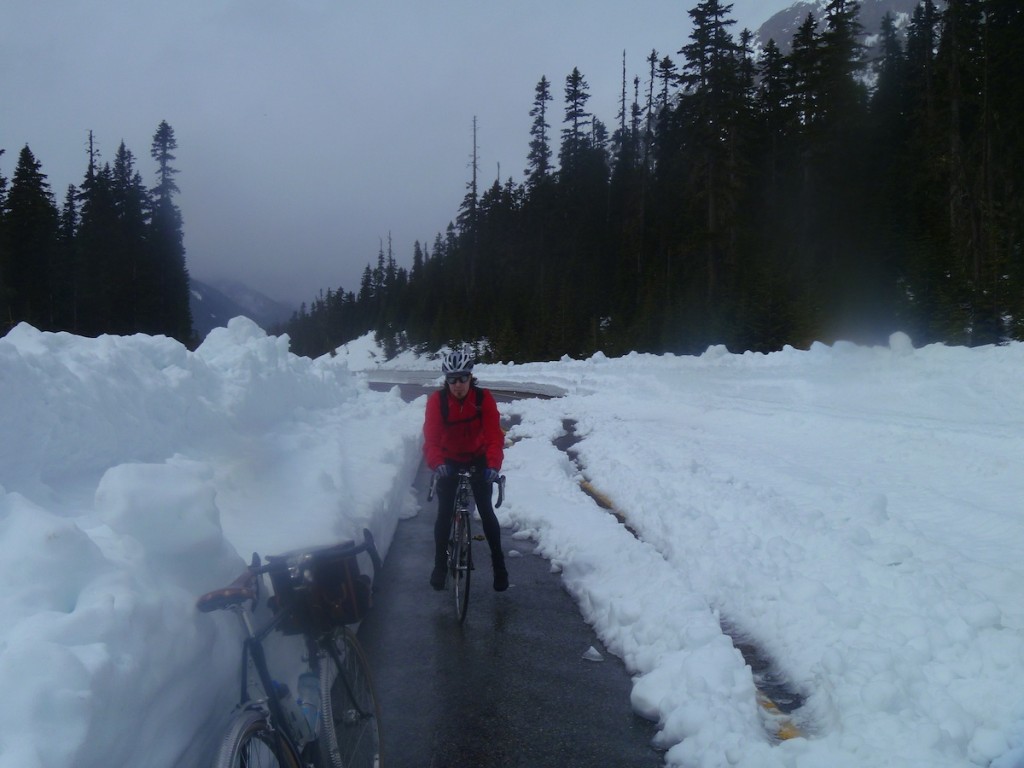 End of the road near Rainy Pass

Beautiful, challenging, and rewarding, riding the North Cascades Highway is special as it is. But if things go well with the American Association of State and Highway Transportation Officials (AASHTO) this month, Highway 20 could be even more so. The United States Bicycle Route System (USBRS) will comprise a network of roads and highways that will span the entire country. To date there are nearly 6,000 miles of designated routes in the USBRS.

In early April, Washington Bikes and WSDOT submitted an application for Highway 20 to be officially recognized as US Bike Route 10. If selected, official designation increases opportunities for funding infrastructure improvements on the route, increasing signage, creates a connected network for cyclists to follow, and should improve its institutional support. Perhaps most importantly, the designation will likely increase the number of cyclists coming to ride the route and spending their money in restaurants, bars, and shops from Anacortes east to Newport on the border of Idaho.

A 2012 Travel Oregon study of bicycle tourism’s economic impact found that visiting cyclists spend $400 million annually, in part because of the draw of Oregon’s designated Scenic Bikeways. Washington Bikes wants to help bolster this state’s bicycle tourism and the USBRS designation is an important part of the effort. AASHTO should announce their decision in late May or early June of this year.

As we descended back down off the pass, it was nearly impossible not to smile ear to ear. The gentle grades and zero traffic around us (car, bike or otherwise) meant brakes were mostly unnecessary. In this land of punchy climbs and screaming descents, 13 miles of easy downhill cruising is an unadulterated pleasure. 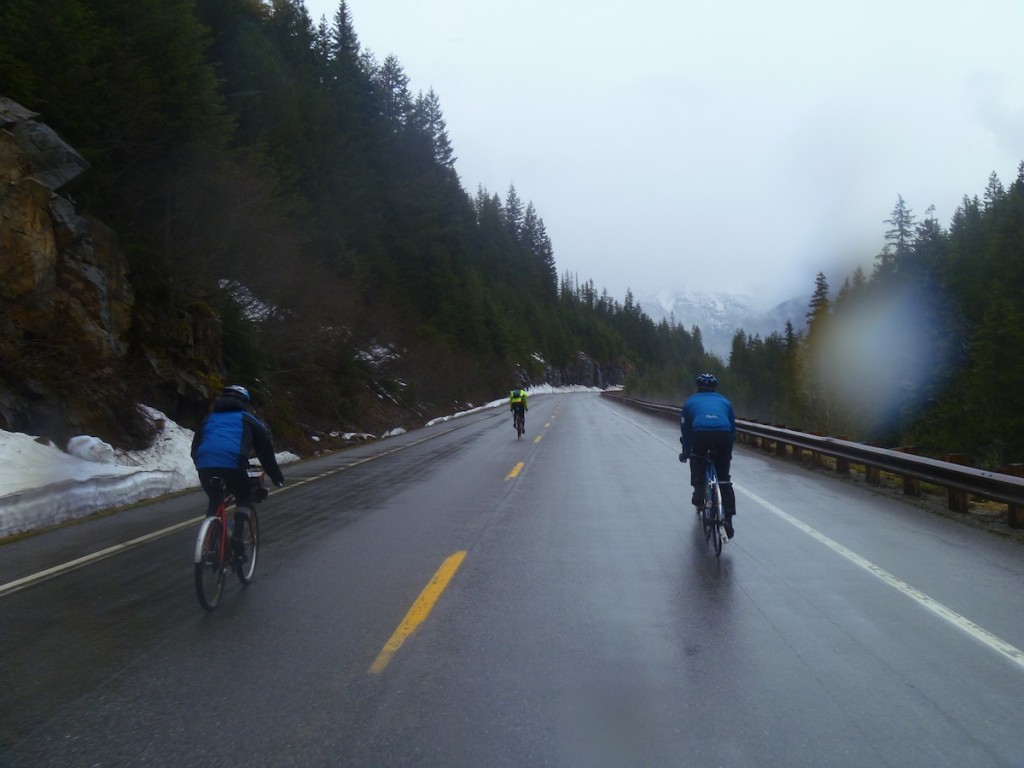 Sadly, all good things come to an end and at mile 54 we reached one of those downhill sections from earlier in the day, now a several mile climb on tired legs. A few more great down hills and few little climbs later, we pulled back into Newhalem. Soaked to the bone, feet numb from the cold, legs tired from the effort, our group of seven was all smiles and high fives in the parking lot.

Riding a car-free Highway 20 was well worth the drive and the effort of the climb. Enjoying a spectacular route free from the noise and danger and stress of traffic is a rarity in road cycling and something every cyclists should experience at some point in their life. The window for riding 20 car free has passed this year—WSDOT opened the gates to cars at noon on May 8—but start planning for next year. With any luck, you could be the first cyclist to ride a car-free section of the new US Bike Route 10.

This article was posted in Adventure, Economic Impact, Events, Guest Blogger, Infrastructure, News, Skagit County, USBRS. Bookmark the permalink. Follow comments with the RSS feed for this post. Both comments and trackbacks are closed.