Organizational Member Profile: A Homegrown Business on Wheels Keeps It in the Family

You could say WA Bikes Organizational Member Andrea Lieberman discovered the model for her bicycle company by pure accident. Not bike accident, but an accident of timing. 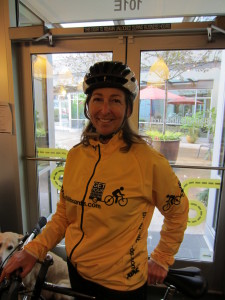 Andrea in full gear at Biking Billboards headquarters across from U Village in Seattle.

Andrea, her husband and two children have always enjoyed biking together as a family. In 2009 Andrea’s father, who in the 1980’s and 90’s found success in real estate development, unexpectedly died, leaving her and her sisters the heirs to East Side condo developments that opened at the height of the financial downturn in 2009 and  remained vacant.

The family tried to figure out how best to reach potential buyers and deducted nearby St. Michelle Winery in Woodinville attracted the sort of person –educated, good income, interested in the arts–who would live in the condo developments they were trying to fill.

With an audience of thousands of concertgoers at their fingertips, Andrea and her family thought a pedicab might offer the best vehicle for reaching them. However, they had a difficult time locating a pedicab company in Seattle, and when they finally reached one, the owner stood them up.

Andrea’s sixteen-year-old son Jace took matters into his own hands. The last weekend of concerts at St. Michelle he grabbed plywood sandwich board signs and attached them to a trailer on the back of his bike. He rode through the crowds and attracted interested homebuyers back to the condo sales office to tour the units.  The next six weeks traffic to the condo units tripled compared with pre-bike-billboard sales. Her son told her he wanted to start a business, built a website and hired a few riders. Andrea eventually stepped in as the business started to grow, and Jace’s focus turned to college applications. Biking Billboards is a family-owned venture with Andrea, her husband, daughter, and son as equal partners.

Founded in 2010, Biking Billboards moved into a permanent office space across from University Village in 2012.  As of 2014 the business employs two full-time employees, two half-time employees, and a crew of riders as needed.

Most of the riders are enthusiastic college kids. Jet City Improv has offered trainings for riders. “We remind them to smile and show your teeth,” Andrea jokes. “We’re a perfect vehicle for under-employed actors.”

When asked what is the most challenging factor in her business she quips “the weather,” even though she points to a successful T-Mobile campaign that took place in the snow. “More people noticed the riders,” she laughs.

The most gratifying moment for the business? Andrea smiles and says “When we execute a campaign that is so successful the client is blown away. The fact we are human, eco-powered, and doing our best is so rewarding!”

“We fill a niche,” Andrea says. “We can reach people in a crowd like no other media can. We pitched and won the business to promote the Washington Health Plan Finder website, a portal to health care guaranteed by the Affordable Care Act, to 18-34 year olds. I told the interviewers “you need real live people to make this more human and warm. We won the business and had a presence at concerts around town from Miley Cyrus to Kings of Leon to Lady Gaga!”  Andrea believes this message resonates with companies that appear too big and untouchable. “We can make them more Seattle-like.” 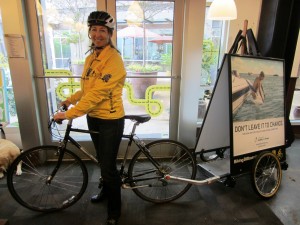 Andrea on bike with trailer. Ready for a promotion!