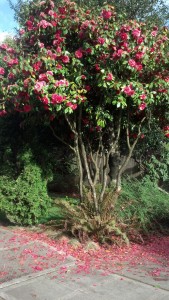 An impressionistic list of things seen, heard, scented, thought, and felt on this morning’s ride to work as I roll toward April 30 and a successful 30 Days of Biking:

Life packs a lot into one morning ride.

This article was posted in Commuting, News. Bookmark the permalink. Follow comments with the RSS feed for this post. Both comments and trackbacks are closed.