April in Walla Walla. Cool spring mornings give way to warm and sunny afternoons (don’t forget to pack the sunscreen!). The air is laced with the heavenly scent of lilacs and other flowering wonders. The rolling hills surrounding this rural community are green with wheat and grape vines.

Steve and I were looking for a weekend escape from Puget Sound. We wanted a destination east of the Cascades that had a flourishing community where we could base ourselves for a few days of cycling exploration. Walla Walla fit the bill.

Nestled in the foothills of the Blue Mountains, the Walla Walla Valley offers mile after mile of quiet and scenic back roads for two-wheeled journeys. The countryside is dotted with wheat fields, orchards and vineyards in this land of agricultural bounty.

We used the Walla Walla Valley Bicycle Map to help us select cycling routes—and there are so many to choose from! The city bike map is also helpful with its local bike routes, trails and bike lanes. Since we happened to be in town the same weekend as the Tour of Walla Walla bicycle race, we avoided areas where the road races were occurring. 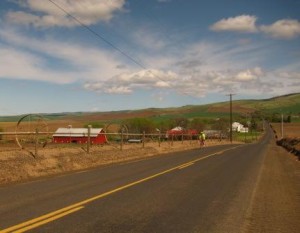 Our first afternoon was spent familiarizing ourselves with downtown, the Whitman College campus and surrounding residential neighborhoods. You’ll find small town friendliness in Walla Walla. Kids walk and bike to school. Tree-lined streets and community parks offer the bicycle traveler pleasant places to ride and relax. The town offers a good selection of restaurants, wine tasting rooms, shops and culture to occupy your time when you’re off the bike as well.

We eventually made our way out to the farmlands on Cottonwood and Russell Creek roads, gently climbing toward the mountains. The views are pastoral. Farm dogs occasionally barked and gave half-hearted chase behind fences, and wheat rustled in the afternoon breeze. 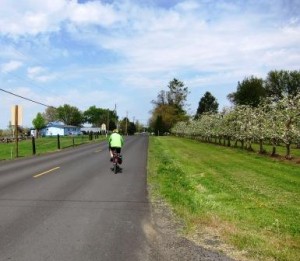 The next morning, we pedaled south past vineyards and orchards to the community of Milton-Freewater, Oregon. Windmills dotted the distant hills and we experienced increasing winds as the day went on. A much smaller community than Walla Walla, you won’t find many eating options but there is a nice park with bathrooms, running water and picnic tables to take a break. Do consult the bike maps if you plan to travel this direction. Your journey will take you across busy Highway 11 and the bike map indicates where you can make safe crossings.

Our return route took us by wineries as well, so we stopped at Dusted Valley for a tasting. We returned to Walla Walla in time to watch the criterium under way on the downtown streets. Our lodging, Fischer Suites on Poplar Street, was right on the race course! The location proved extremely convenient for us, as we were an easy walk to downtown and its services. Our suite included a kitchen as well, giving us even more flexibility for meals.

We concluded our Walla Walla visit with a short Easter morning ride meandering our way through neighborhoods to the Mill Creek Trail and Walla Walla Community College. We saw the intriguing Poetic License public art installation by Buster Simpson. The sculpture is comprised of license plates produced by inmates at the Walla Walla State Penitentiary and features poetry about salmon migration in Mill Creek, flowing in a concrete channel through the town.

As we biked back to our lodging, we were busy scheming on future visits to the Walla Walla Valley. There was so much bike riding to do and other seasons to experience. There were more wineries to check out, other nearby communities to explore, museums to visits…well, you get the picture. 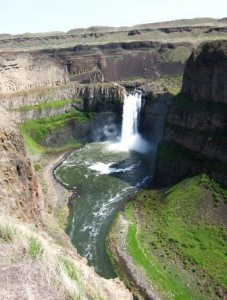 But our weekend wasn’t over yet! We had one more destination–a non-cycling one. We packed the car and made the side trip to Palouse Falls State Park for a hike. Tucked deep in a coulee, this gem of a waterfall remains invisible until you are standing on the edge of the chasm cut by the Palouse River as it travels across the scablands of eastern Washington. I love this magical little oasis nestled in coulee country and try to allow time to visit it whenever I’m in the region.

Washington Bikes is offering you an opportunity to win your own Walla Walla Bicycle Weekend!

This article was posted in Adventure, Rides, Tourism, Travel, Walla Walla. Bookmark the permalink. Follow comments with the RSS feed for this post. Both comments and trackbacks are closed.