The Susie Forest: A living legacy to Susie Stephens

Nancy MacKerrow is the mother of Susie Stephens, former executive director of Washington Bikes. After Susie was struck and killed by a bus in St. Louis, Nancy decided to create the Susie Forest as a sustainable and living tribute to her daughter. We celebrate Susie today–her birthday–with this post from Nancy about the Susie Forest.

People ask me how the Susie Forest began and why I chose trees as a way to honor Susie. Well, I’ve associated Susie with trees since before she was born. Her due date was March 10, 1965. On April 13 the doctor called me to the hospital to get this baby out into the world. My husband and I left for the hospital early in the morning and for Louisville it was still a wintry day with bare-branched trees. Susie decided she wasn’t ready and I went back home. On the 16th the doctor called us back and on the way I realized that the trees had that green glow that says “Spring!” That day Susie felt she was prepared to tackle and conquer the world. Ever since, as her birthday approaches, no matter where we have lived, I look to see where the trees are on their way to spring. When the 16th arrives in Spokane this year there will be Susie trees which have leafed out.

How did Susie feel about trees? In her journals I found her joy of finally pedaling into the shade of trees. And in one entry she wished the campground owner could make his young trees grow ‘right now’ because she needed shade. And here is the logo she drew for her new consulting business.

The Susie Forest began with the desire to plant one tree.

Prompted by the death of Cooper Jones in Spokane, Susie and the Bicycle Alliance worked closely with Cooper’s parents David and Martha Jones to pass the Cooper Jones Act for bicycle and pedestrian safety education in 1998. After Susie’s death Martha Jones called me. One of the things we talked about was the tree that was planted for Cooper at his school and how much it meant to the family. 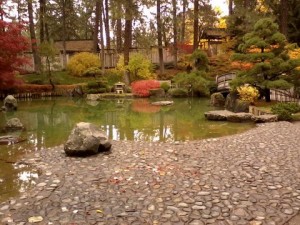 The Susie tree in the Japanese garden in Spokane.

The idea of a tree in the Japanese Garden struck a chord with me because Susie’s trips to Japan in high school put her on her life’s path. I got some misinformation about planting in the parks and it was a year and a half before I got everything to work out. Then I was told that if I donated for three trees I could put Susie’s name on a plaque in City Hall. I knew she would like that. So there were three trees, one in the Japanese Garden, one to demonstrate the importance of planting more street trees, and one to honor Grace Susie Bain, the stillborn baby of good friends. 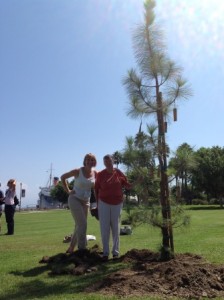 Three trees and I was hooked. I went to the Parks Department and told the woman I had been working with that I wanted to keep planting Susie trees. “No you don’t,” she said. “I HAVE to!” “You don’t want to plant Susie trees,” she said, “you want to plant a Susie Forest.” So the passion that has helped me deal with Susie’s death began.

How many trees are there in the Susie Forest? You know, I’m not sure – not even in Spokane. On April 16 the forest count here in Spokane will become 216 individual trees and three groves. The Anniversary Grove consists of ten Ponderosas planted last year on the tenth anniversary of Susie’s death. The 35th Ave Grove has about 35 Ponderosa seedlings that I helped plant during Re-Forest Spokane 2011. The Library Grove may have no trees in it. In 2004 during a Read for Trees program we handed out a couple of hundred seedlings and at the time I wasn’t thinking about wanting to know where the Susie trees were. I don’t know if any were planted and if any survived. The Puget Sound area Forest is growing fast but I need to get more trees into the middle of the state. And I’m trying to talk my way into planting more trees across the country and around the world. Because I don’t know of all the trees that have planted I’m estimating the size of the Forest at about 300.

Two years ago, the Bicycle Alliance staff planted a tree for Susie Stephens. You can read about it here.

This article was posted in Guest Blogger, News, Spokane County. Bookmark the permalink. Follow comments with the RSS feed for this post. Both comments and trackbacks are closed.