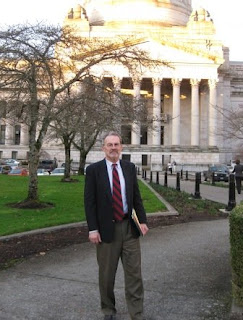 Washington Bikes wouldn’t be what it is today without the blood, sweat and sweat (yes, bike advocacy involves a lot of sweat!) of its amazing volunteers. Today I’d like to present a brief interview with Ted Inkley, who is the current board president for the Bicycle Alliance, and a big advocate for everyday cycling.
What is your first memory of biking?
One early memory will be seared in my brain forever. It was summer. I had just gotten my first “big” bike without training wheels–a red one-speed J.C. Higgins from Sears, Roebuck. Unfortunately, I got the hang of riding it long before I got the hang of getting off. So I’d practice by riding around and around the block. When I wanted to get off I’d yell at my mother as I passed our house; she’d run out the front door and snatch me from the bike. But one day she got busy and didn’t come out when I yelled. I rode around and around the block for what seemed like hours (but was probably no more than ten minutes), screaming every time I passed our house and getting more terrified with every circuit. Things ended well–she finally came out and grabbed me. I was scared, and highly indignant that she hadn’t heard me earlier. But the incident didn’t dim my enthusiasm for cycling. And I eventually learned to get off without falling over, although I have to admit that I still fall over occasionally.
When and how did you become involved with the Bicycle Alliance? And what does bicycle advocacy mean to you?
During the 90s I worked with a woman, Sara, who was both a bicycle commuter and a Bike Alliance volunteer. At the time, I rode the bus to and from work. Sara would pass me every night on her bike as I stood at the bus stop. As she went by she’d always yell, “Ride your bike!” So I eventually began bike commuting. The more I rode, the more I realized that cycling conditions were far from ideal, and the more interested in advocacy I became. Sara told me that I should get involved with the Bike Alliance, and suggested that I go to meetings. So I found myself at the Bike Alliance’s old, funky headquarters in the storage area of an old apartment building in the shadow of the Convention Center parking garage. I found that I liked the people and the organization, and within months I was on the board.

To me, bicycle advocacy means spreading the gospel of cycling beyond those who are already bicycle enthusiasts. It means working to convey both the joy and the practical advantages of cycling to people who haven’t been on a bike since before they were teenagers. It means trying to demystify cycling, and showing people that you don’t have to have a fancy machine, wear lycra, or be an athlete to enjoy your time on two wheels. It means showing people that the bike can be a tool as well as a toy, that it’s a form of transportation worth investing in. And it means trying in a positive way to change the cultural norms about transportation in our country.
What roles have you filled as volunteer for the Bicycle Alliance over the years?
I’ve been on the Bike Alliance board since 1998, and have been board president twice. I’ve helped in a number of ways, from drafting and lobbying for legislation to writing blog posts to serving on committees to helping draft our bylaws. I’m currently on the legislative committee and on the executive director search committee. My passion is advocacy, but I try to help any way I can.What is your favorite ride, in the Seattle region or elsewhere?
I have lots of favorites, both here and elsewhere. I live in North Seattle, and have worked out a meandering ride to Edmonds that involves lots of quiet roads, views of the Sound and Olympic Mountains, and coffee and pastries at the half-way point. I try to do that ride at least once a week when the weather cooperates. I’m also a big fan of bike trails, and especially love the unpaved Snoqualmie Valley trail east of Seattle. It lets you cycle through beautiful farmland and forests with great mountain views, and goes over several spectacular trestles. It also gives you a 60-mile round-trip ride with practically no traffic hassles. It’s everything a day on the bike should be. Although I’m not a real mountain biker, I also occasionally like to explore logging roads on my old mountain bike. There’s a trip to the top of a small mountain east of Seattle that I try to do every year. Lots of uphill, no people, and spectacular views of the Alpine Lakes Wilderness at the top. Finally, I have vivid memories of several days on the bike during a visit to Denmark a few years ago. I particularly remember one evening, riding through the streets of Copenhagen just as the street lights were coming on. I was surrounded by cyclists of all descriptions–everyone in Denmark rides a bike, mostly old-fashioned, upright three speeds. It was like a graceful peloton, but without the competition, everyone just gliding together down the street in the soft evening light. It was magic.
What are you riding these days?
I tend to keep bikes forever once I get them. I’ve collected five bikes over the past 20 years or so. I have an old, steel-framed Trek mountain bike; it was my original commuter but I use it now for dirt-road riding. My workhorse is a Trek 520 touring bike; I lost count of the distance I’d ridden it after about 60,000 miles. I also have a fire-engine red Bike Friday, great for traveling and running errands. My sweet ride is a Marinoni road bike. Finally, I have an old English-made Raleigh three-speed with a huge headlight and a big brass bell, good for stately cruises on the bike trail.
What is your winter riding gear set-up? (Ed.’s note—Surely this still works for the spring showers we won’t be able to avoid!)
I’m still searching for perfection in this regard. I believe that Gore-Tex is your friend, and have a Showers Pass jacket and Gore-Tex rain pants. I keep my feet dry-ish with nylon rain boots. I’ve given up on keeping my hands dry, but insist on keeping them warm. Neoprene kayaking gloves work well for this. I’ve also considered buying an old-fashioned English-style riding cape, although I haven’t taken the plunge yet. And every bike that I own has fenders. They are worth their weight in gold in the coastal Northwest climate.
What is your strategy for tackling the topography of the region?
One of humankind’s greatest achievements of the last hundred years is the triple chain ring. Gear down low enough and the hills get a lot easier. But since I got my vintage three-speed Raleigh I’ve discovered another way: when you can’t avoid steep terrain, just get off and walk. I think that non-cyclists are sometimes intimidated when they see strong riders standing in the saddle, grinding their way up a steep grade. But you don’t have to be an athlete to walk up a hill.
How does biking improve your quality of life?
It does wonders for my state of mind. After I ride I feel clear-headed, positive and ready to tackle anything. And while I’m no athlete, I’m in great physical shape for a person of my age. I beam every time the doctor checks my blood pressure and resting pulse. Everyday things, like going to the store or post office, become fun when I do them on the bike. And I can park for free just about everywhere, even in Seattle.
Lastly, any tips for people who may be tentative in dusting off that old bike in the garage?

Riding a bike is easier than you think. You don’t need a three-thousand dollar machine–any bike that’s mechanically sound will do. You don’t need to be a jock–there’s no need to use the club riders whisking past you as role models. It’s not dangerous–all you have to do is use common sense and give some thought to your routes. Although I’m an avid cyclist I’m also a chicken, and I’ve used a bike map to avoid busy, high-speed streets and chart comfortable, low-traffic routes all over Seattle. You don’t need to take the plunge all at once. Just pump up the tires and ride around the block a few times. And cycling is fun. When you finally get on the bike you won’t be able to resist smiling. I saw a sign recently that said: “You can’t buy happiness, but you can buy a bike, and that’s pretty close.” Truer words were never spoken.
I agree Ted! Thanks so much for your dedication to integrating biking into your everyday life. I loved his story about not being able to dismount his bike, and think he provides a great inspiration to get involved. If you too are interested in volunteering with the Bicycle Alliance, visit our website to get involved!

This article was posted in People, Volunteer. Bookmark the permalink. Follow comments with the RSS feed for this post. Both comments and trackbacks are closed.