A new council and a new chance for Sammamish and King County to come together and complete this regional trail, community space, and local treasure. Sign up today to help elect these bike champions. 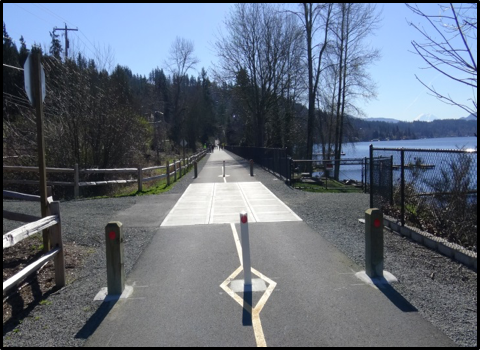 This November’s election will decide who fills four of the seven seats on the Sammamish City Council. None of the current council members whose terms are up are running for re-election. Instead, a slate of fresh faces is vying for the four open council seats. The fate of the election will shape the makeup of the majority of the Council, and thus the flavor of the council’s direction on key issues, including completing the East Lake Sammamish Trail, for the next four years.

The East Lake Sammamish Trail is an incomplete regional trail running 11-miles from Redmond, to Issaquah, via Sammamish. The trail is also part of the 44-mile Locks to Lake Corridor, which will connect Seattle’s Ballard Locks to the Cascade foothills. Despite the positive benefits of such a trail, building the segment through Sammamish has been an uphill struggle for King County, who owns the trail right of way and is building the trail. Progress through Sammamish has been mired by lawsuits, first between King County and lakefront property owners, and now between King County and the city of Sammamish. 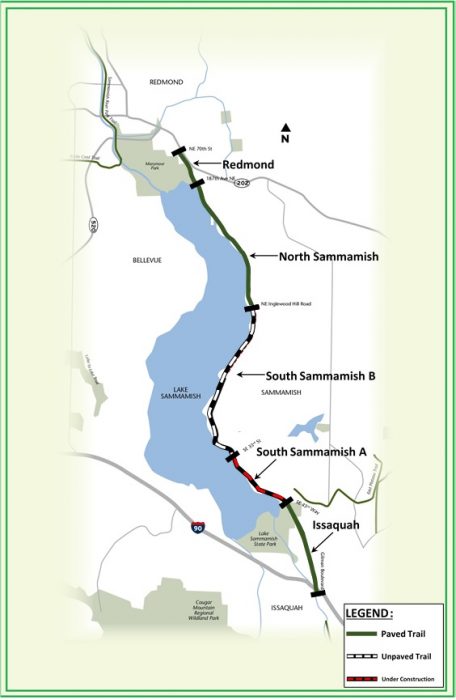 The 5 miles of the East lake Sammamish Trail through the City of Sammamish have been years in the making, whereas the Redmond and issaquah segments were smooth sailing. New leaders in Sammamish are the best hope to clearing the stalemate and moving the trail forward.

Washington Bikes believes that completing the trail to regional standards, resulting in a paved trail that’s accessible to people of all ages and abilities, is essential. That’s why we’ve endorsed candidates in all four Sammamish City Council races who will come to the table ready to work towards completion of the trail as soon as possible.

As we reported this summer, the stalemate between city and county is currently being mediated by the courts. The city of Sammamish is currently appealing a court-endorsed decision that two sets of stops signs on the trail face towards low-traffic roads rather than the trail. It’s yet another example of the Sammamish council fighting the inevitable and much loved trail at every turn. And this time its at the expense of trail safety: Stop signs throughout the rest of the trail face the roads that bisect it; trail users will expect the same in this location. Furthermore, limited sightlines along the trail mean that people crossing the trail slowly (e.g. older and younger generations on foot and on bikes) wouldn’t be able to foresee whether they have a safe crossing distance.

The stop signs are just one example of the city digging its’ heels in at the expense – literally – of residents and completion of the trail. Our Sammamish endorsed candidates bring passion, pragmatism and new ideas to the table. If elected, we plan to work with them to open a new chapter on the East Lake Sammamish Trail, and one day soon stand alongside them to open the final segment of the trail for all people to safely use and enjoy.

It’s not just Sammamish where electing bike-friendly leaders now is essential. In each one of the Eastside communities we’ve endorsed, there are important funding and policy decisions coming up that can make for safer, connected communities by bike.