Hang Up or Pay Up!

A few weeks ago, as I was walking to the West Seattle Farmer’s Market, I was forced to back pedal in the crosswalk as a left-turning motorist breezed through–oblivious to my presence as he chatted on his cell phone.  Sound familiar? 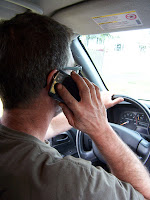 Beginning June 10, motorists in Washington State can be ticketed for using a handheld cell phone or sending and receiving text messages while driving.  For drivers younger than 18, even the use of a hands-free cell phone while driving is off limits.  The fine is $124.

The passage of this law comes too late for Gordon Patterson of Vancouver.  In September 2009, Patterson, a teacher, was biking home after work when he was struck from behind in a bike lane and killed.  The motorist fled the scene and was later caught.  Evidence showed that the driver, 18-year-old Antonio Cellestine, was sending and receiving text messages when he hit Patterson.  In January of this year, he was convicted of vehicular homicide and sentenced to five years in prison.  Read the article in The Columbian for more details.

The campaign to pass this law was spearheaded by the Driven to Distraction Task Force of Washington State, of which the Bicycle Alliance is a member.  We rallied cyclists across the state to contact their legislators in support of the bill.  As bicyclists, we are more vulnerable on the roadway to inattentive drivers than folks enclosed in vehicles.

This law won’t ensure our safety on the roads but, if this law is enforced, it will help.  I, for one, will continue to watch out for the other guy.

This article was posted in Issues & Advocacy, Legal, Safety. Bookmark the permalink. Follow comments with the RSS feed for this post. Both comments and trackbacks are closed.