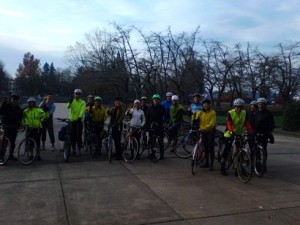 “We’re #1!” The group gathered for the Legislative Bike Ride raises a cheer for our #1 Bicycle Friendly State standings before rolling out to ride the streets and trails in Olympia.

Volunteers from the Capital Bicycling Club marked and led a route from the WSDOT headquarters that took us along the Chehalis-Western Trail. In addition to the Capital Bicycle Club and bike-friendly state legislators, riders included representatives of WSDOT, the Washington Traffic Safety Commission (WTSC), Federal Highways Administration, the Olympia Bicycle Pedestrian Advisory Committee, and Cascade Bicycle Club, and the executive directors of Futurewise and Washington Bikes. Spokane City Councilman Jon Snyder, who represents the Association of Washington Cities on the WTSC and has led efforts for complete streets and better bicycling in Spokane, participated as well.

WSDOT Sec. Lynn Peterson rallied the riders before we rolled out, pledging her efforts and those of the department to maintain Washington’s status as the #1 Bicycle-Friendly State in America, as recognized by the League of American Bicyclists. She also noted, “No state on the list earns all that many points — basically, every state is a D student or worse.” Peterson pointed to the WSDOT “Safer Streets, Safer People” action plan (currently in draft form) and initiatives supported by Washington Bikes as key elements in the effort to raise the bar.

The route took us through the sites of important projects that bridged gaps in the Chehalis Western Trail, linking segments broken by major roadways with fast-moving traffic. When we stopped by the new bike roundabout at the Pacific Avenue Bridge, a worker came over to find out who we were and who had marked up his nice fresh pavement with the Dan Henrys* that flagged the turns along our route. We assured him they were temporary and that we appreciated his desire for a nice clean trail.

The bike ride provided a great opportunity to talk informally about the safety priorities we had just been discussing in the committee meeting, the upcoming legislative session, and the budget challenges that lie ahead.

*What’s a Dan Henry? The temporary pavement markings that indicate direction of travel along a planned bike ride. Why are they called that? Dan Henry was a real person — a commercial pilot who flew the Boeing 707 jetliner, brought a bike along on his flights, invented the directional pavement markings commonly used for organized bike events, and patented front and rear bike suspension systems and a sling saddle. The League of American Bicyclists and many local bike clubs utilize the markings.

This article was posted in Advocacy, Legislature, News, Olympia. Bookmark the permalink. Follow comments with the RSS feed for this post. Both comments and trackbacks are closed.