Ask most people around Olympia and the weeks are already beginning to blend together with a frenetic pace that promises to intensify through the end of April. With budget discussions still in their preliminary phases, the legislature continues to focus on a host of policy bills in committees in both the House and Senate. 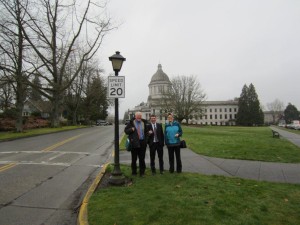 Thanks to your support, and the work of many of our partners, cities, and towns statewide, the House version is now ready for a discussion in the House Rules Committee. We expect a vote in the Senate Transportation Committee next week. It’s still not too late to contact your elected officials – we need them to hear your voice now!

Safe Passing Bill (SB 5564). With the Neighborhood Safe Streets Bill underway, we’re gearing up to focus on our safe passing legislation that gives motor vehicles the added tools to cross the centerline of a road, if they wish to safely pass people on foot or bike at a distance of three feet (conforming to the Washington State Driver’s Manual that already recommends a safe passing distance of three feet). We’re thrilled at the bipartisan support that this bill is receiving due to its common sense approach to giving drivers more options to safely pass, while also providing safety awareness about safe passing distances. We expect to see bill numbers assigned to the House and Senate companions by next week.

New Partnerships with Motorcycle Advocates. Building on Washington Bikes’s successful partnership in 2009 to pass legislation that now requires new and retrofitted traffic signal loop detectors to detect bicycles and motorcycles, we’re excited to again work with our friends at the Washington Road Riders Association. Today in the Senate Transportation Committee SBs 5141 and 5263 were heard. SB 5263 clarifies how motorcycles can pass bicycles and pedestrians, making it legal for them to pass in the lane (similar to the shared-lane, or sharrows, concept). Senator Rolfes, with the support of the sponsor, Senator Benton, has proposed to add a friendly amendment clarifying that when motorcycles pass they must provide a 3’ passing distance. Along with Cascade Bicycle Club, we will continue to monitor the progress of this bill.

SB 5141 allows motorcycles to stop and proceed through traffic control signals, if the signal loop detectors don’t detect the motorcycle. Sound familiar? This is a problem that bicycles deal with often and we’ll be exploring potential amendments with the Washington Road Riders Association to address the needs of bicycles.

Budget. We are continuing to work with our partners at the Transportation for Washington Campaign to grow Safe Routes to Schools and to fund the Complete Streets Grant Program. Additionally, we continue to work to advocate for the funding of trail projects, such as the Spokane River Centennial Trail Extension, Ferry County Rail Trail, Spruce Railroad Trail/Tunnel Restoration, and the Point Defiance Peninsula and Missing Link.

Help Us Create a Statewide List of Bicycle Projects. Washington Bikes continues to develop our statewide list of bicycle projects to help identify the projects for the state to fund in budgets and future revenue projects.