I was fortunate to have been visited by one of Spokane’s very influential bike and pedestrian safety advocates, Katie Ferris.  She serves on the Spokefest Board and has made a model-event out of Bike to School Day at Broadway Elementary School in West Valley School District. It is people like Katie Ferris who make Washington a more bike-friendly  and active place.

Spokane Summer Parkways is inspired by a Colombian event called Ciclovia (meaning “bike path” in Spanish) and similar events in other parts of the world. Recreation, fitness and community combine to create a unique event which includes only human-powered transportation. All people are welcome– with or without their super-hero capes. 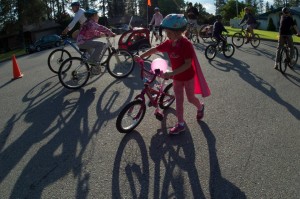 At Wednesday’s event people of all ages and abilities enter and exit the parkway at any point along the course and can participate in a variety of the following activities:

* Listen to danceable music being played from stereos on bikes.

* Play their own music instruments

* Walk, bike and play in the park 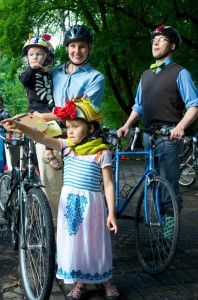 This family looks into the future with their imaginations at Summer Parkways 2014. Photo by Hank Greer. 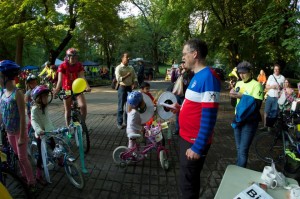 Spokane City Council Member is a volunteer judge for the bike-decorating contest. Photo by Hank Greer. 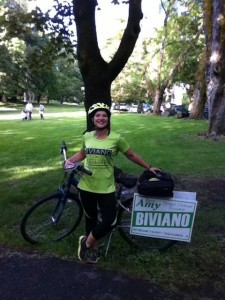