Ride your bike to work, and you too can acquire ESP! 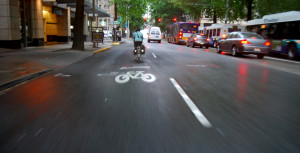 I began bike commuting for purely economic reasons. In 2004 I was working a low-paying job with wildly unpredictable hours in an area not well served by public transit. As gas prices soared, I realized I couldn’t continue to drive each day and still afford things like food and shelter.

So, I started riding my bike to work. Twelve miles each way, North Seattle to Boeing Field. Like so many, I was surprised to discover unexpected benefits above and beyond saving money. First, I noticed I was beginning my day fresh and energized. I am not a morning person, but here I was actually relishing my mornings. I began to view my trips to and from work as a part of the day I looked forward to rather than just a wasted time span to be endured.

In fact, though my current boss does not like to hear this, my commutes are often the best part of my work day. There is something about being active in your surroundings, senses engaged, that allows the mind to wake up and work creatively. It’s an environment that more and more is missing from the workplace as digital displays we type into seemingly replace people to see and talk to. But I digress (slightly).

As the weeks and months of riding to work passed, I noticed other things, like the fact that along my route, I had pretty much learned every bump, crack or pothole in the roads. I could anticipate and navigate them without a lot of thought. Further, I noticed that traffic had certain behaviors depending on where I was and what time of day, sometimes even what day of the week it was.

One of my favorite stretches on the morning ride in is surprisingly one of the busiest. Stewart Street, beginning by REI where both the I-5 main line and express lanes empty out, is four one-way lanes of commuter rapids that lead to the core downtown area. Many streams of cars, buses and bikes converge for a few blocks before scattering to their respective destinations. When Stewart is busy, the traffic speed slows enough that, especially with the downhill grade going west, it is relatively easy to move at “bicycle speed” in the center of whatever lane I need. If traffic is more sparse, then things open up so much that even though motorist speeds increase, I have plenty of room along either the left- or right-most lanes, once again depending on my needs.

Here is where the really fun stuff began.

I’m sure everyone has experienced the situation where a lane change or turn happens with no signal, or, where the turn signal is going and yet the person just continues on for blocks. As bicyclists, we generally learn not to place too much trust in signals, activated or not. Look for eye contact, watch to see what happens before committing. Always leave a way out just in case.

I began to try and predict, as much just for my amusement as for my safety, what my co-commuters were up to. And I noticed gradually that my abilities of precognition were becoming better and better with time. I was pretty impressed with myself, at least until I realized where the “magic” was coming from. If you haven’t already picked up on this, when you’re in city traffic, listen carefully to the sounds around you. Before the blinker comes on (if it ever does) when that driver next to you first thinks of making a change in course, the pitch will almost always change as they either let off the gas or step on it to make their move. When I hear the pitch change, it’s like a message: that driver is thinking of doing something. This game of “guess their move,” while entertaining is also quite valuable, since we can use as much advance warning as possible. And of course, it’s not extra-sensory at all, it’s just the normal senses, getting put to use for a change.

Give it a try!

This article was posted in Bike to Work, Commuting, Encouragement, Humor, Infrastructure, Safety, Seattle, Transportation. Bookmark the permalink. Follow comments with the RSS feed for this post. Both comments and trackbacks are closed.