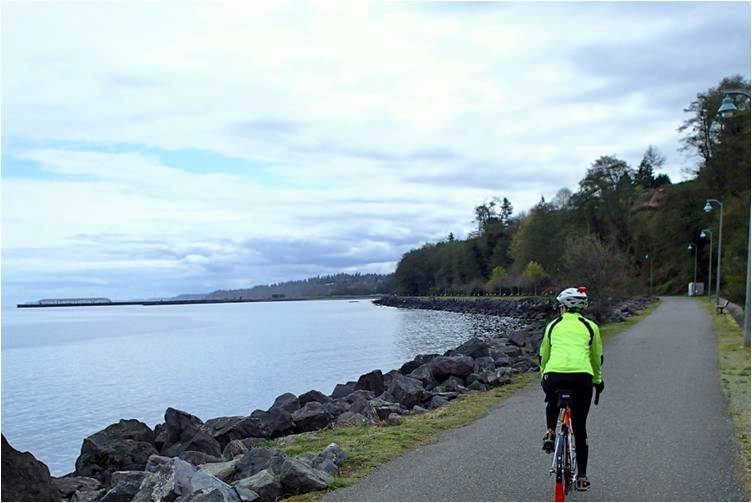 Today we present the final installment of Riding in the Rain Shadow. Tim Hennings describes his bicycle adventure on the Olympic Discovery Trail between Port Angeles and Sequim Bay.

The morning brought blue skies, but we took our time getting going. Top priority was a first rate Sunday breakfast. We picked First Street Haven. It was as good as promised by the glowing reviews. They even include a fresh pastry with their tasty omelets. That is probably over the top, but we could reasonably claim a calorie deficit for the weekend.

The amazing thing about the Olympic Discovery Trail is that it exists at all. Hats off to the heroes who have accomplished so much already, with many more miles in the works. It is so striking because Port Angeles has a mostly industrial waterfront with paper mills dating back about 100 years. It is not the first place you think of when considering where to go for a scenic bike ride.

We wondered what to expect as we headed east out of town. The ODT starts out going past a gritty former mill site, and for about a quarter mile is rough gravel (hopefully temporary). It looked iffy. We were glad to see the trail quickly evolve into a nice, paved path. It goes for 4 miles along the Strait of Juan de Fuca. For the first half mile or so, there are lots of benches and tree plantings on the water side of the trail. The ODT is well-suited to road bikes.

This first flat stretch on the ODT out of Port Angeles is recommended for anyone looking for a short, easy ride with great views. 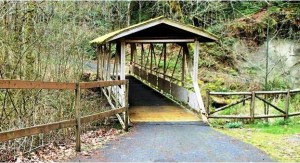 Then the trail turns inland for a couple miles, zig zagging for a climb of about 200 feet, nothing noticeable. Then it suddenly plummets 100 feet to a covered bridge over Bagley Creek, requiring a climb (or walk!) back up. Over the course of our day on the ODT we encountered a few of these ravines along the trail. Each of them was a small challenge, but also scenic and interesting with cool bridges. Variety is a good thing!

Before starting out, we were worried that some of the trail might go along 101. That was not at all the case. It came close a couple times, but hardly worth mentioning. Mostly it meanders through woods and farms. It has stretches of gradual incline or decline — punctuated by the ravines. 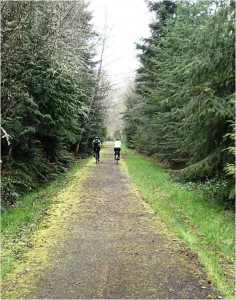 The trail uses some residential roads when passing through Sequim. This wouldn’t really be a big deal except that it is not well marked. More than once we missed a turn. You have to keep a sharp eye out for the small signs. The locals were happy to point us in the right direction, and they also commented about the poor markings. It seems strange that the community would invest so heavily in the trail itself, but then cut corners on budgeting for trail signs. Maybe some merchants could be persuaded to help with signage in exchange for some exposure. It would certainly make the ride more fun if it was always clear which way to go!

One other interesting note about the ODT concerns moss on the trail. This happens on some of the forested stretches and is quite picturesque — but disconcerting to a road cyclist with skinny tires. Isn’t moss slippery? However, neither Catherine or I had any problem at all. And that was after a day of rain. It seemed to be a non-issue. 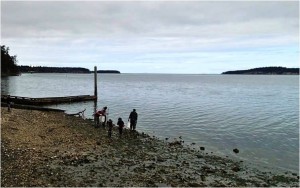 We rode past Sequim to Sequim Bay State Park. It has nice views of the Bay, plus drinking water and places to relax. That was a turnaround point for us.

On the way back, we lunched at the Black Bear Diner in Sequim. It is very close to the trail. I wonder if the manager there has thought about adopting a trail segment, and pulling in more riders? It sure seems like a natural supply of ravenous travelers! The food was good, too!

Our ride back to Port Angeles was quick, and seemed even easier than coming the other way. Maybe it was because we didn’t stop so often, and we were more relaxed because we knew the trail. We did make one notable stop on the way home at the Railroad Bridge State park. It is an unusually impressive bike/ped bridge. It crosses over the scenic Dungeness River west of Sequim. As a bonus, Catherine spotted a pair of Wood Ducks on the river, which are among the most beautiful waterfowl in North America. We wished we’d had time to visit the Audubon Center, which is supposed to be terrific. Next time!

For details on the trail segments that we traveled, visit the official Olympic Discovery Trail site.

Riding in the Rain Shadow: Exploring the Port Angeles Area by Bike

Congrats to Sequim for Becoming a Bicycle Friendly Community!

This article was posted in Adventure, Guest Blogger, Olympic Peninsula, Port Angeles, Rides, Tourism, Trails, Travel. Bookmark the permalink. Follow comments with the RSS feed for this post. Both comments and trackbacks are closed.