Around Washington, Bike to Work Week takes on a different spin (ouch! bike pun!) in each town that celebrates it.

One of the 3 racks at Spokane City Hall that filled up for the Bike to Work Kickoff Breakfast.

Of course, we have plenty to celebrate in the #1 Bicycle Friendly State – and plenty of work yet to do (so register for your local Bike to Work effort and the National Bike Challenge to stand up and be counted).

WA Bikes maintains a list of Washington state Bike Month challenges to help people connect with the effort in their town, and we need your help to keep it complete and up to date. Let us know about a challenge we’re missing and we’ll get it on the list.

During Bike to Work Week I participated in events on opposite sides of the state. I’m sharing my snapshots of the fun and camaraderie from Spokane (today’s post) to Olympia (tomorrow’s post). 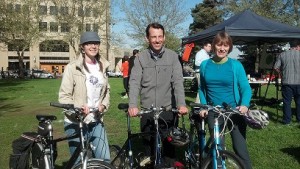 Spokanites know we’d had a 6-year streak of rain on kickoff day—snapped the streak at last in year 7. It did become a point of pride to have 200 or so hardy folks on bikes show up every year despite the forecast, though. 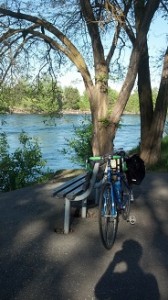 Sen. Andy Billig and Spokane City Councilman Jon Snyder, both great champions who “bike the talk,” rode to the event to celebrate the growth in Spokane bicycling. As always, for those who may have a solitary route to work this event provides the chance to hang out with others who bike. They compare gear, routes, and funny stories and build the bicycling community. As the founding chair I felt as if I were attending a hometown reunion with so many familiar faces.

Monday night I rode from downtown along the Spokane River Centennial Trail to meet with members of the Spokane Bicycle Club. They’re working hard to grow membership and to bring in all kinds of riders and it was great to hear their energy and enthusiasm. You may spot a club member at a trailhead somewhere around Spokane sharing their schedule of upcoming rides; they’re adding rides to appeal to people at various skill levels and invite you to check them out. 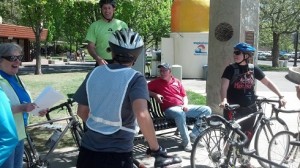 Volunteers from the club laid down 700 bright arrows to mark the routes for the brand-new “Commute of the Century”: 20-mile rides every day during Bike to Work Week at lunchtime around different parts of the city checking out existing and proposed bike routes and providing feedback.

Even though BTW Week is over, you can ride the routes and get the T-shirt that proves you’ve ridden 100 miles of Spokane’s streets; download maps, explore some neighborhoods, and provide feedback to city planners and engineers. The maps provide short and long options to suit your preference or your time constraints. 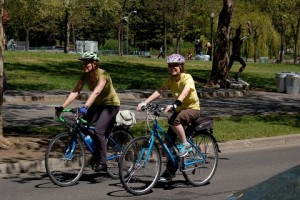 I got to ride the Commute of the Century with Betsy Lawrence, friend & co-founder of women’s riding group Belles and Baskets. (Photo by Hank Greer)

Tuesday I rode with over 2 dozen people in the short loop that took us up the South Hill on Adams and around bike lanes and quiet neighborhood streets to end at Hart Field for fruit and cookies. (Thanks for the treats, Brandon and Sara Blankenagel and SBC members!)

I had to leave Tuesday night so I missed Wednesday morning’s Energizer Stations. I know from the pictures that, as always, riders warmed up with coffee, juice, and goodies at various locations and thanked the volunteers who got up early to give them a smile and a treat.

And of course, the Wrap-Up Party on Friday provides another fun tradition, this year at the River City Red brewery owned by Gage Stromberg, a fantastic supporter of bicycling in the Lilac City. 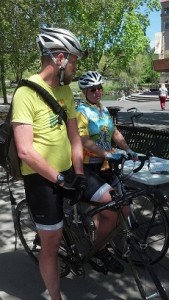 Great to see one of our Share the Road jerseys at the start of the Commute of the Century ride!

After Spokane it was off to a conference and then to Olympia for Part 2 of Bike to Work, Bike to Everywhere. 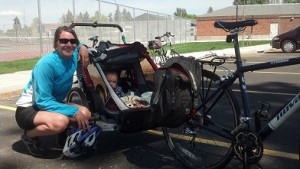 Mother and son tackled the Commute of the Century together.

This article was posted in Bike to Work, Events, News, Spokane County. Bookmark the permalink. Follow comments with the RSS feed for this post. Both comments and trackbacks are closed.