Home on the Open Range

A commentary on how the cyclist and the farmer can be friends.

POV Cyclist: It’s a beautiful afternoon for a country ride. The paved county road 30 miles out of town looks like a good place to get away from traffic, smell the fresh air, and get that heart rate pumping. Cattle grazing in the pastures provide an idyllic backdrop to a great ride. 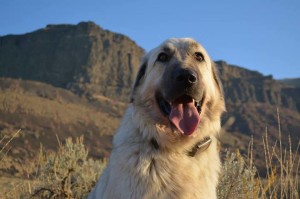 Suddenly, a large dog with a deep bark comes bounding alongside the cyclist, who panics and pedals faster. The dog gives up pursuit shortly and the cyclist breathes a sigh of relief at a narrow escape. Immediately upon returning to the city, he reports his sighting of a vicious dog to Animal Control, satisfied at an opportunity to do his civic duty.

POV Rancher: It’s a beautiful afternoon for chores on the ranch. The cattle are divided into several groups and moved regularly between pastures. Each pasture is subdivided by temporary electric fence tape and managed with attention to the right timing and density for the specific ecosystem. Managed intensive grazing keeps the land healthy, and meets consumer demand for grass fed free range beef.

Livestock guardian dogs move freely between pens to protect the cattle from cougars and wolves, a practice recommended by the Dept. of Fish and Wildlife. The big dogs are fierce defenders of their herd from predators, but not particularly interested in humans. Humans are sometimes a source of treats, especially the ones with the two wheels that sometimes come by on the county road that cuts through the ranch.

Sometimes the dogs even have to protect the humans, like the time the rancher was absorbed in repairing an irrigation pump and the big dogs had to come running to chase off a cougar stalking him. That day the rancher breathed a sigh of relief at his narrow escape, and praised the big dogs for their attention to duty.

POV Animal Control: Citizen complaint of vicious dog received. Similar complaint made by another cyclist two months previously. By-the-book response says after two complaints a letter goes out giving 24 hours to tie up or fence dogs, or they will be impounded. Letter is sent, duty is carried out.

Extremely ticked-off rancher calls the next day, pointing out the property covers 6,000 acres, the area is posted as open range for livestock, and the dogs are livestock, not pets. Animal Control officer begins to contemplate the possibility of unemployment when the county commissioners hear about this.

POV All of Us: We all know how easy it is to demonize an entire group of people because of a few bad actors. The story above actually happened; the names and location are withheld due to fear of retaliation from powerful special interest groups from the city. Social media being ubiquitous, the story has spread across the state, further souring a whole lot of country folks on city cyclists.

But oftentimes it’s not a matter of bad intentions, but lack of information. The cyclist didn’t understand how to read the countryside or the potentially devastating impact of a simple complaint. The ranchers didn’t think about the need to provide education about standard practices that are simply obvious in their community. And the Animal Control officer needed to temper by-the book reactions with practical experience. The next time you plan your route, check to see if it includes open range where the livestock have the right of way. If you’re lucky, you’ll meet the dogs and not the bulls in the road. 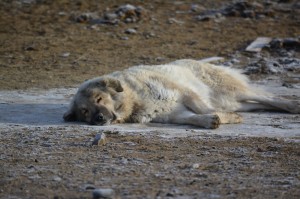 At the point where a public road enters a range area, and at such other points thereon within such area as the county legislative authority shall designate, there shall be erected a road sign bearing the words: “RANGE AREA. WATCH OUT FOR LIVESTOCK.” 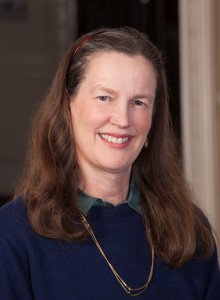 Sue Lani Madsen is an architect and goat rancher based in Edwall, WA in Lincoln County. She and her husband operate Healing Hooves, providing natural vegetation management in the Pacific Northwest using a traveling herd of 200+ goats. Her grandfather raced on the velodrome circuit in New York in the early 20th century, and her father was a long-time member of the League of American Wheelmen.

This article was posted in Attitudes, Guest Blogger, Rural. Bookmark the permalink. Follow comments with the RSS feed for this post. Both comments and trackbacks are closed.