Next week I’ll be presenting with marketing and social media expert Andrea Learned at the Bicycle Urbanism Symposium at the University of Washington (not too late to register!). Our session, “Get Women Rolling: How (and How Not) to Reach and Motivate Women Riders,” will be offered Friday morning, June 21,  9-10:30 a.m. with a hands-on component to help participants rethink some of their assumptions about women who ride, women who don’t ride, and how to reach and inspire more riders, both male and female.

As I prepare for the workshop three recent encounters are top of mind. I recently moved much farther from the office and radically increased my bike commute (a somewhat [ahem] painful experience in the first few days….), which has increased the number of times I interact with people biking, walking, and driving.

Andrea Learned, who consults on sustainability-focused communications and social media content strategies, will be presenting at the Bicycle Urbanism Symposium.

My encounters, along with the many emails, questions, and discussions that come my way because of our work, have me thinking about the assumptions we make as people who ride bikes and the assumptions others make about us. These happen to be Seattle encounters but they could have happened anywhere.

Rider 1: On the Burke-Gilman Trail somewhere inside the UW campus at an intersection with a street; we’re waiting together for the light to change. She’s wearing a cute flowered skirt (bike shorts underneath), and I’d guess she’s in her late 40s/early 50s. Coming up behind her I say, “Cute skirt!”

She thanks me and I mention that I often wear skirts when I ride, although today I’m in capris. Her response: “I like wearing skirts. When I do something stupid people just think, ‘She doesn’t know what she’s doing’ instead of ‘She’s an a&*h*&#.”

Rider #2: A different day on the Burke-Gilman, again on the campus somewhere but this time in a stretch that has a lot of intersecting paths, sometimes a Yield sign on the path I’m on, and pedestrians galore.

I’m riding my 8-speed upright “Mary Poppins” bike, not my road bike, and wearing street clothes as I generally do. My bike is loaded with a couple of flowered Po Campo bags. I definitely don’t look like a “cyclist” and I’m riding maybe 12mph at best (not sure as I don’t have a cyclometer on this bike yet; I’m riding at a steady but not speedy pace).

As I approach one of the intersections I see a man on a bike riding toward the trail segment I’m on. He rises up off the saddle and looks toward me but he isn’t clipping out and I don’t know for sure that he’s going to stop and let me cross safely. We’re making eye contact as I hit the brakes to slow down and give myself enough space and time in which to react if he in fact doesn’t stop.

I immediately hear a woman’s voice from behind: “F&*$! Geez!” A man and woman whiz by so close that I could touch them.

I am shaken and angry as I ride on. On a busy multi-use path with lots of cross traffic, riding that fast, let alone riding that closely behind a total stranger who isn’t a teammate or someone on a group ride with you, is simply not safe or responsible. They couldn’t see what I could see about the potential for a collision and they didn’t know what they didn’t know.

I could have been slowing for anything. That rider on the cross path could have been proceeding through the intersection, in which case they would have had a horrific and completely preventable crash. I could have seen an unleashed dog, had a dangling strap about to tangle in my spokes and bring me to an abrupt halt, felt a tire go flat and realized I needed to stop — anything.

Under the circumstances I didn’t have time to signal that I was slowing; the hand that would have signaled is the hand I need for my front brake and my first responsibility is to keep my bike under control.

My inside voice: “I bet you speed and tailgate when you drive, too.” 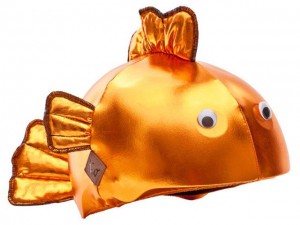 Rider #3: I’m heading north on 4th Avenue through the downtown core in the bike lane. A rider in a bright orange jersey with an orange helmet cover sweeps gracefully in a turn through the signal ahead of me and pedals up the hill in the same lane. I’m watching the rider thinking, “That’s one I’ll never catch on this hill” but the traffic lights help me out.

As I come up behind the rider I realize the orange helmet cover is a fish, tail wagging behind and fins flapping to the sides, and the person on the bike is an incredibly fit-looking woman. I call out, “I like your fish!”

The gray-haired woman turns toward me, smiles, and says, “Thanks! I bought it for myself when I turned 65. I figured if it isn’t fun it isn’t worth doing.”

I want to be her when I’m 65. I’ll wear skirts without apologizing, and I’ll leave plenty of room in which to respond if a rider in front of me needs to make a stop.

I’ll be thinking about these women and their friends who don’t ride — yet — when we present at the symposium, along with the participants in the I Bike SEA encouragement program we put on fall 2012 in Seattle, the women of the Belles and Baskets riding group in Spokane, Tacoma VeloFemmes, the women advocates I just met in Wenatchee who want to mentor girls to help them start riding, and so many others who have discovered the freedom, strength, and independence riding a bicycle provides. How can we spread the joy to others?

This article was posted in Attitudes, News. Bookmark the permalink. Follow comments with the RSS feed for this post. Both comments and trackbacks are closed.