Today’s guest blog post was written by former Bicycle Alliance staffer Mark Canizaro of Seattle.  This was originally published in July 2005 on his personal blog. 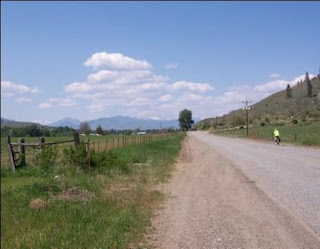 I work at a bicycle advocacy organization. Among my tasks is answering telephone and email questions about bicycling in general and frequently those are about possible routes.

Today I got a request from a father in Bellingham who had a wonderful idea as a parent. His son graduated from high school last month and is heading off to college next month. As a way of symbolizing the rite of passage, and a (possibly last) chance to spend some time together, they decided to bicycle together to Washington State University in Pullman. I thought it was a great idea. (He seemed to need my encouragement.)

Neither are serious bicyclists, but they’ve been enjoying riding together the last year or so and decided to take on this very big undertaking (It’s 400 miles or more). His reason for calling was a routing question. He said,

“I know we go down Interstate 5 100 miles to Seattle, get on Interstate 90 and go east a couple hundred miles, but I don’t know where to go once I get out towards Spokane. Can you tell me what turn to take?”
There was a long, long pause as I gathered my thoughts and prepared for a nasty conflict.

The route he was suggesting, 5 to 8 days of really miserable riding on Interstate freeways, was awful. This is not that unusual. Many people forget to stop thinking like a car when they get on a bike. Still, I was shocked… and nervous. I had a good suggestion for that last day of riding, (there is also a major highway similar to his suggestions) but I also had a half-dozen much better routes to suggest for the first week.

I finished my monologue and prepared for the response. People get very defensive about routes and it’s a strangely common reaction to be pretty angry at the suggestion of quieter routes.

“I’m really embarrassed, I’ve lived here my whole life and it never occurred to me that there was any other way to get to Seattle except on I-5… of course it would be nicer to ride on some of those other roads.”
And why don’t more people bike?

I’ve had the same experience in Seattle with new or prospective cyclists asking me about routes around town, assuming that the ONLY option was the nasty, clogged, smelly, loud, intense, motor filled arterial. Forgetting that the quiet streets, the neighborhoods, the pleasant and interesting streets even exist. Missing the point.

This article was posted in Adventure, Attitudes, Guest Blogger, Travel. Bookmark the permalink. Follow comments with the RSS feed for this post. Both comments and trackbacks are closed.