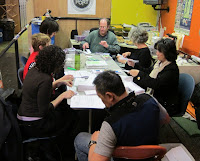 Every fourth Thursday of the month I get together with a group of volunteers for what we call a “work party”. It may sound like an oxymoron and, when it was first explained to me, I assumed the word “party” was thrown in to confuse potential volunteers into free labor.

However, after spending several months folding and stuffing renewal letters and creating bike map packets I have come to understand it as an opportunity to connect with fellow cyclists, trade trip stories; dish about the construction on Dexter, the diet on Nickerson, battles lost and won in Olympia and the climate for cyclists in Washington State. Now I am, admittedly, not nearly as bicycle-to-the-core as many of my regular volunteers, but the nice thing is we have that in common as well as the desire to make Washington a safer place for cyclists.

Conversation and cycling community aside I have been making some incredible sandwiches for the occasion. Last month’s were mushrooms in a white wine sauce with spinach and a slow-roasted pulled pork tenderloin with South Carolina BBQ sauce, both on Sourdough. On the menu for next month are a Caprese (Mozzerella, Tomato, Basil) and a pressed salami and gouda cheese, both on Foccacia bread. I hope you can make it sometime.

Info on month end work parties can be found here.

This article was posted in Volunteer. Bookmark the permalink. Follow comments with the RSS feed for this post. Both comments and trackbacks are closed.