Northwest Bicycle Commuting: Washington gets the booby prize–but why?

Want to increase the rate of bike commuting everywhere? It’s all about the infrastructure 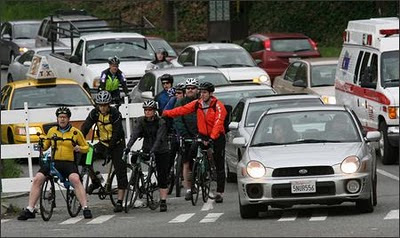 The League of American Bicyclists may have anointed Washington as America’s most bicycle-friendly state; but when it comes to bike commuting in the Northwest, we rank dead last.
That news came in an October 7 post on Sightline Daily, an e-newspaper from the Sightline Institute, a Seattle-based non-profit think tank devoted to Northwest sustainability.
Sightline’s Eric de Place analyzed census data about commuting in the four-state region (Washington, Oregon, Idaho and Montana). The fact that Oregon leads the pack, with 2.3 percent of all commuters getting to work on two wheels, probably won’t surprise anyone. But what’s sobering is that Washington was whooped by Montana (with a 1.7 percent bike-commuting rate) and Idaho (with a 1.2 percent rate) as well. Washington’s bike-commuting rate is 0.9 percent.
Northwest bike-commuting statistics look pretty anemic everywhere when you compare them with world leaders such as the Netherlands, where 27 percent of all trips–not just commute trips–are by bike. But Washington’s comparatively poor showing even among local states should be food for thought among local bike advocates and transportation planners.
As might be expected, three of the top six regional bike-commuting cities were college towns. Eugene came out on top with a 10.8 percent bike-commuting rate, and was the only city to reach double digits.  Missoula, in weather-unfriendly Montana, came in second, at 7.2 percent; while Bellingham was number four at 5.2 percent.  Others in the top six were Portland (number three, at 5.8 percent), Boise (number five, at 4.2 percent) and Seattle (number six, at 3.0 percent, or a little more than half of Portland’s rate).
Other Washington cities were well down on the charts. Spokane was Number 9 with a 1.9 percent bike-commuting rate; Tacoma was Number 18 (0.7 percent), Vancouver was Number 19 (0.6 percent), Everett was Number 20 (0.5 percent), and Bellevue was Number 21 (0.4 percent). Kent had the honor of being last among all listed cities, coming in at Number 28 with zero percent of its citizens getting to work by bike. (If you work in Kent, I’d love to have you prove the United States Census Bureau wrong on that one.)
The good news is that Washington was ranked Number 1 in the Northwest for the percentage of workers who take public transit to work (a relatively low 5.9 percent, but still better than the other states).  Seattle was the most transit-oriented of the region’s cities; 19.5 percent of workers there get to their jobs by transit.  Also, Bellingham and Seattle ranked Number 1 and 2, respectively, in the percentage of those who walk to work. (De Place’s post called Seattle “the Northwest’s clear leader in commute-trip alternatives.”) Finally, Washingtonians do carpool at a higher rate (11.3 percent) than other Northwest states.
But why does Washington do relatively badly when it comes to cycle commuting? I put the question to de Place by email.  He didn’t have a definitive answer but did offer some ideas.
First, he said that Seattle—at least compared with most other North American cities–wasn’t a bad cycling town. “Biking in big, dense congested cities is hard,” he said, “at least given American transportation culture and bike infrastructure…There’s no question that Seattle can do better, but it’s not like there are all that many [American] big cities that do wildly better. Portland has done awesome things, no question about it, but it’s also the leading edge.”
But de Place added that “the alarm bells go off when I see the dismal stats for Tacoma, Bellevue, Spokane, etc.”  He said there may be many reasons for the low bike-commuting rates in these cities, but added that “the sheer size of the Puget Sound Metro area is a factor that prevents or discourages biking for some significant share of the trips.” 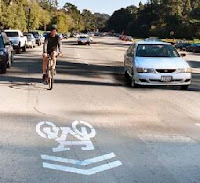 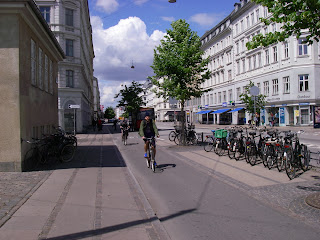 But to de Place, in the end it gets down to infrastructure. “I strongly believe there’s a big pent-up demand for bike infrastructure. Make it safe and even relatively convenient and I think we’ll see huge numbers of people shift to [cycling] for at least a portion of their commutes and trips. But as long as our transportation policies treat bike infrastructure as basically ornamental, we’ll only see piecemeal and incremental progress.”

This article was posted in Attitudes, Commuting, Funding/Policy, Go By Bike, Infrastructure, Transportation. Bookmark the permalink. Follow comments with the RSS feed for this post. Both comments and trackbacks are closed.