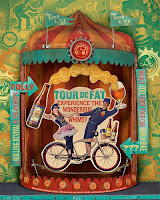 Decorate your bike and don your alter ego…Tour de Fat is returning to Seattle’s Gasworks Park on July 31!

Tour de Fat is not a bike ride or race. It’s a celebration of all things bicycle organized by our bike-loving friends at New Belgium Brewing Company. This rolling carnival travels to select communities around the West and features a costumed bike parade for the young and young-at-heart, music and other live performances, a car-for-bike swap, beer garden, and food vendors. All this wacky fun and goodness benefits the work of the Washington Bikes and Bike Works – woo-hoo! 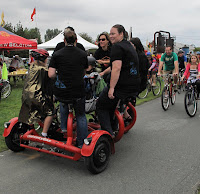 The event kicks off in the morning with the bike parade ($5 suggested donation for this event benefits Bike Works). Costumed participants will meander from Gasworks Park through Fremont, the self-proclaimed center of the universe, then roll back to the park for the festivities. 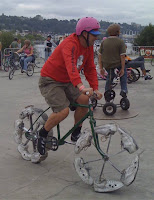 Kick back and listen to the bands, be entertained by performances, and sip some tasty New Belgium beers (these proceeds benefit the Bicycle Alliance). Test ride one of the many bike contraptions in the bike pit (the bike with sneaker wheels is a popular one). Sign up for the Slow Ride contest—slowest rider wins! And be sure to bring an old bike tube to contribute to Alchemy Goods recycling bin. You’ll be eligible for a drawing for some of their cool products made from recycled bike tubes and other recycled materials. 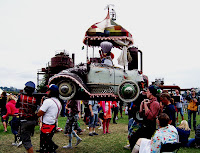 Celebrate the bicycle as a sustainable and worthy form of transportation with the announcement of the car-for-bike swap winner in the afternoon. (This could be you if you enter the contest now!) The lucky winner is transformed before all from a car driver to a full-time bike commuter when he/she hands over their car, title and keys in exchange for a tricked out custom commuter bike.

Admission to Tour de Fat is free, but bring cash in your wallet. Proceeds from the parade, Tour de Fat merchandise, and beer sales benefit bicycle advocacy. After all, it is all about the bicycle!

This article was posted in Bike Culture, Events, Go By Bike, Seattle, Tour de Fat. Bookmark the permalink. Follow comments with the RSS feed for this post. Both comments and trackbacks are closed.