A tragedy in Cheney and the “right” to drive 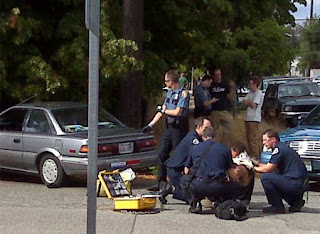 I don’t know anything about William Knight, Jr. of Cheney other than what I read in the news.
What I read in the news, however, makes me very glad that I don’t walk or ride a bike in the town where William Knight, Jr. drives his 1997 Kia.
At 10:45 p.m. on Sunday, June 27, 61-year-old James Dahl was crossing First Street in Cheney when he was struck by the Kia, with Knight behind the wheel. Dahl was airlifted to Sacred Heart Medical Center in Spokane, where he died.
This event was tragic but not unusual. In 2008, 69,000 pedestrians were injured and almost 4,400 killed in the United States. Pedestrian deaths represent a disproportionate 12 percent of American traffic fatalities.
But there’s more to this particular story. Last April 15, 36-year-old Theodore Chauvin was riding his bicycle near Cheney when he was struck by the Kia, again with Knight behind the wheel. Chauvin suffered a broken leg and shoulder and spent four days in the hospital.
The State Patrol didn’t charge Knight with a moving violation for the April 15 collision, although Chauvin was apparently riding his bike legally when Knight hit him. According to the Spokesman-Review, however, police did ticket Knight for failure to have insurance. That case is pending in Spokane Country District Court.
But that’s not the end of it. On April 6, Knight was driving the Kia when a police officer stopped him for improper vehicle registration. (Knight told the officer that he had borrowed the car.) As a result of that stop, Knight is facing tickets for having an expired registration, no insurance and improper use of license plates.
Of course, police are still investigating the June 27 accident, so it’s premature to assign blame. But you do have to ask yourself: given Knight’s encounters with police in April, why was he still legally on the road the night that he struck Dahl?
Yes, everyone deserves due process, and the wheels of justice always seem to grind slowly. But a motor vehicle is a deadly weapon as well as a means of transportation. We should set the rules accordingly, but we don’t. In Washington as in other American states, it doesn’t take much to get your driver’s license, and you have to work really hard to lose it. Driving is seen as more of a right than a privilege.
It’s not that way everywhere–for example, Germany, where getting a license is difficult and losing it is relatively easy. Traffic penalties are also generally higher in Germany and other EU countries. If you exceed the speed limit in Germany by more than 30 km/h (about 20 mph) or more, you can lose your license for up to three months, in addition to paying a stiff fine. In France, going 40 km/h over the speed limit on an autoroute (freeway) can cost you a whopping $1,500 Euros—much to the consternation of some American drivers.
Our country’s lax attitude toward the driving privilege comes at a tremendous cost in lives. In fact, per kilometer walked, an American pedestrian’s chances of being killed are 14 times higher than they are in Germany or the Netherlands. That’s an incredible number of preventable deaths.
I don’t know for sure whether tougher driver-licensing requirements or stiffer fines would have saved James Dahl’s life. But there’s no doubt that they would save the lives of thousands like him every year.

This article was posted in Issues & Advocacy, Legal, Safety, Spokane County. Bookmark the permalink. Follow comments with the RSS feed for this post. Both comments and trackbacks are closed.