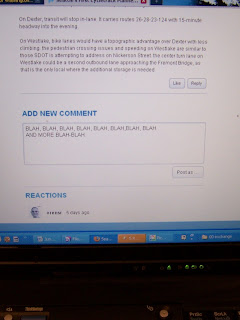 What is that sucking sound?

I am new to blogs and blogging, with less than a month of online posts under my belt. I receive at least two emails a day at work that link me to seemingly unending information and opinions about all things bicycle, and the number is rising. The only reason these emails get past the spam filter is that the folks sending them are on my contacts list.

Reading these blogs about bicycling was for me like going to sea for the first time: I can tell it will take awhile to keep from getting dizzy from the constant back and forth, up and down, and the feeling of being trapped. I love getting on the boat that is the article on the other end of the link, but then we leave the dock. An instant rough sea waits at the end of the blog post, with all of the comments, and comments on comments, replies to replies, and often a chance to jump overboard with MORE LINKS.

Reading blog commentary, I am sucked into the brains of other people, and I reflexively try to follow the reasoning (and even the unreasonable). It seems that the internet’ ability to allow instant letters to the editor (sans the editing), attracts extremes of point of view and experience. Bicycling blog commentary seem to follow a pattern:

third comment—cynicism or lame attempt at using a previous posting as the butt of a joke.

I just finished Josh Cohen’s PubliCola post about putting in a Cycle Track on Dexter. Josh’s blog was simple, factual and educational, and something about bicycle infrastructure that I have not seen in the Seattle Times, yet. OK, so no links to follow in the comments section, but 62 postings all culminating in what? Did anyone commenting change their opinion, or was it just a morning fix of agitation (political caffeine)?

Please believe me when I say that I am not one of those “let’s all get along” idealists. But I would hate to become so cynical and isolated that all I did anymore was fire off one-liners in cyberspace, entirely intent on polishing my cynicism. I happen to like observing human behavior.  My Mom was a great people watcher and could make up a life story for anybody, usually focusing on the good in a person without judging the book by its cover. I also know that she drew on her infamous photographic memory—recalling relevant information that came from one of the three daily newspapers she took—and she enjoyed pointing out an Op Ed writer’s misstatements, or a politician’s rhetoric.

I try to imagine what she would have had to say about a bike blog’s detractors and champions. I truly appreciated her prowess at critical thinking and fact based schooling of loud mouths, and I feel her distaste for the blood sport of attacks on life choices, or mean spirited aspersions on anyone’s desire to influence change for the common good.

This article was posted in Bike Blogs. Bookmark the permalink. Follow comments with the RSS feed for this post. Both comments and trackbacks are closed.