It’s going to take work on multiple fronts to eliminate deaths and serious injuries to people walking and biking in Washington state. But, by working together we can achieve more, faster. That’s why, this year in Olympia, we championed legislation to merge two separate safety advisory committees – and to empower that group to identify weaknesses in the transportation system that impact people walking and biking, and recommend solutions until we reach #TargetZero.

This is important work. Washington continues to see deaths for people walking and biking trend in the wrong direction; 2018 yet again saw an increase in deaths and serious injuries among Washington’s most vulnerable street users (see chart below). 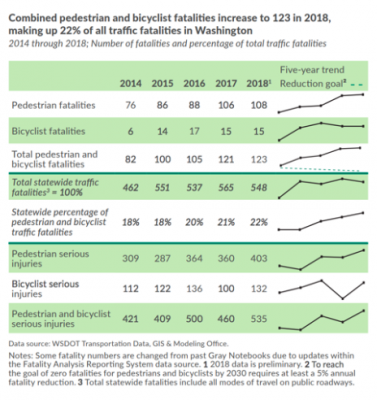 In 2017, Washington Bikes partnered with Sen. Liias and Rep. Kloba in efforts to better understand the causes of serious injuries and deaths in Washington state and to find strategies to improve safety for those biking on Washington’s streets and roads. This led to the enactment of the Cooper Jones Bicyclist Safety Advisory Council.

Until now, the pedestrian and bicyclist safety councils had been working independent from one another to identify weaknesses in the transportation system and submit annual reports to the legislature that include, among other things, policy reform recommendations. Those recommendations have already led to policy changes. One such example is the Vulnerable User/Safe Passing Law passed in Olympia this year, which the Cooper Jones Bicyclist Safety Advisory Council recommended to be updated last year.

As with the prior committees, the Cooper Jones ATSAC will convene a panel of interdisciplinary professionals from law enforcement, multimodal transportation planners, public health representatives, municipalities, victim’s families, and active transportation advocates. The council will analyze bicyclist and pedestrian-involved collision data. This will be an opportunity to take a systemic look and gain a statewide understanding of what is taking place, where are the biggest weaknesses, and what solutions will curb the current, alarming trends. The council will submit an annual report to the legislature that includes recommendations for safety improvements.

Washington Bikes expects the recommendations of this panel to help inform and guide future policy and funding decisions made in Olympia and in cities, towns and counties across the state. Washington Bikes anticipates working with legislative and local leaders to change laws, and direct funding that will aggressively reduce deaths and serious injuries on our streets, and hold leaders accountable to both #TargetZero and #VisionZero.

The legislation honors the heritage of The Cooper Jones Act of 1998 which set the foundation for bicycle safety legislation in Washington state. Named for 13-year-old Cooper Jones of Spokane, Wash., the Jones family worked relentlessly after the tragic loss of their son to strengthen safety laws for people who bike. Now, over 20 years later, Washington still has a lot of work ahead to make streets and roads safe for people who bike. The Cooper Jones Active Transportation Safety Advisory Committee aims to honor the work of the Jones’ family while making much needed transportation system safety improvements for those that bike, walk or roll.