Throughout the 2017 legislative session, Washington Bikes shared the importance of SB 5402. Now we’re celebrating the legislation’s enactment and the creation of the Cooper Jones Bicyclist Safety Advisory Council! 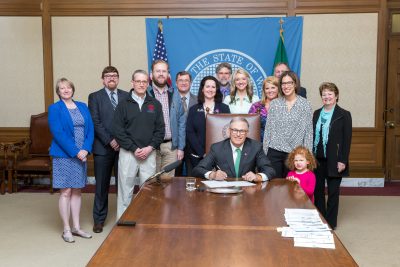 On Tuesday, May 16, Governor Inlsee signed SB 5402, creating the Cooper Jones Bicyclist Safety Advisory Council. David Jones (Cooper Jones father) was able to make the trip from Spokane for the bill signing. We missed Cooper’s mom, Martha Jones, who was unable to make the trip, but the Jones’ presence was strong and felt by all at the ceremony.

This year marks 20 years since the heart-wrenching loss of Cooper. While Washington Bikes looks forward to eliminating traffic deaths on Washington’s streets, the work of the Council will entail studying stories similar to Cooper’s, which are devastating and in some instances preventable. This day was full of emotions, both hope for a day when Washington’s streets are designed to keep all users safe, especially the most vulnerable and also sadness for the unnecessary loss of life experienced at a disproportionate rate for people on bikes.

Washington Bikes is grateful to David and Martha Jones advocacy and support over the last couple of decades and to the members of the legislature who helped ensure passage of this bill. And with the creation of the Council, now our work really begins.

Washington Bikes’ statement on the passage of SB 5402:

On Tuesday, May 16, Governor Inlsee signed SB 5402, creating the Cooper Jones Bicyclist Safety Advisory Council. In Washington state, bicyclist fatalities and serious injuries make up 7.2 percent of all traffic fatalities and serious injuries. The risk is disproportionate for people who bike compared with other modes. SB 5402, sponsored by Senator Marko Liias and five other Senators, establishes the first interdisciplinary panel dedicated to examining causes of serious injury and death for people who bike and providing subsequent recommendations for prevention to the legislature. Through this Council, Washington Bikes looks forward to working with a diverse set of stakeholders to improve bicycle safety for all users. 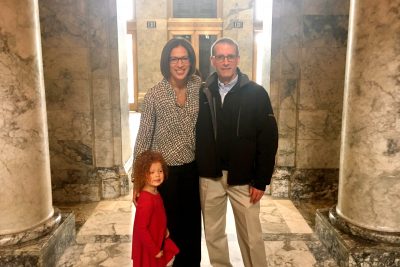 Washington Bikes is proud this bill saw broad bipartisan support in both the State House and Senate. Special thanks to House sponsor, Representative Shelley Kloba, and the additional House co-sponsors, as well as Representative Ed Orcutt, who added important amendments to secure its passage. Riding bikes for health, recreation or transportation should be accessible and safe throughout Washington state.

Stay tuned for updates as the Council meets for the first time in July. Sign up for the Washington Bikes e-news for updates on policy priorities or to stay on top of action alerts when it’s time to speak up in the legislature.