Washington state adds more bike capacity on buses with the passage of HB 1149. 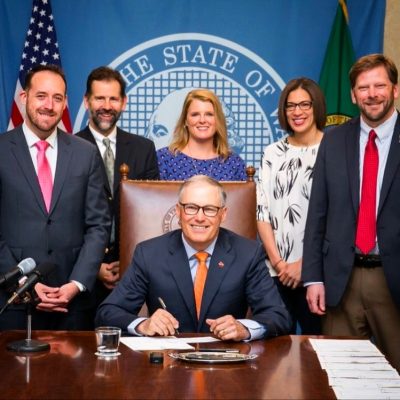 Many of you are familiar with this scenario: You ride your bike to your nearest bus stop and discover that the racks are already full.

This unfortunate scenario was in part due to a state law, which said that most buses could only be equipped with racks long enough to accommodate only two bikes. Prior to a recent change in law, transit providers had to go through a lengthy process just to ensure three-bike racks were allowed. That is until last week when Governor Inslee signed HB 1149. Thanks to our friends at the Washington State Transit Association who led the charge to fix this law, bike racks on buses can now be up to a suitable four feet in length, allowing bike racks that can hold three bikes!

“Now, instead of nearly all transits in the state…filling out a bunch of paperwork annually, they can have the longer bike racks on current and future buses,”  said Justin Leighton, Executive Director at WSTA. “This is great for multi-modal connections.”

Washington Bikes was pleased to support this legislative effort which helps to ensure mass transit access to as many bicycle riders as possible.

This article was posted in News and tagged bike rack, Bus, legislative session, multi-modal, Olympia, transit. Bookmark the permalink. Follow comments with the RSS feed for this post. Both comments and trackbacks are closed.