We Are Traffic: Court Says Cities Must Maintain Streets for Bicyclists 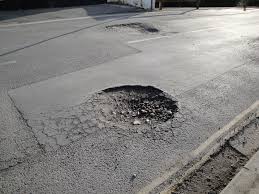 This isn’t the crack that led to the fall in Port Orchard. (Wikipedia image licensed for noncommercial reuse.)

The ruling made headlines across the state as once again it was announced that bikes are traffic.

Cities have a responsibility to maintain streets for bicycling to the same standards that apply for other traffic, a Washington appeals court held in a recent ruling. Defining bicycling as “ordinary travel,” not a purely recreational activity, the judges wrote in O’Neill v. City of Port Orchard, “Bicycles are an integral part of Washington’s ‘statewide multimodal transportation plan.”

The ruling by the Washington State Appeals Court came in a lawsuit filed by Port Orchard rider Pamela O’Neill. The city argued that the requirement to maintain streets in reasonable condition for ordinary travel did not apply to travel by bicycle. Their ruling sends the case back to the lower court for further disposition of the original suit.

The ruling does not require cities to make streets perfectly smooth for ideal conditions — some irregularities in surface are a given. It does, however, reinforce the standing of bicycles as transportation already established by the Washington State Supreme Court in Camicia v. Howard S. Wright Constr. Co. (2014) and Pudmaroff v. Allen (1999). The latter is the suit in which the Bicycle Alliance of Washington filed an amicus brief arguing that a bicyclist in a crosswalk has the same rights, duties and obligations as a pedestrian.  Washington cities have a clear duty to maintain roadways that are safe for bicycle travel.

The court noted in its ruling, “Falling is an inherent and necessary risk of the activity of cycling, and O’Neill assumed the general risk that she would fall off her bicycle and injure herself. She did not, however, assume the enhanced risks associated with the city’s failure to repair an alleged defective roadway of which the city allegedly had constructive notice” (“constructive notice” means that the city, in the ordinary course of maintaining the street, had plenty of prior opportunity to observe and correct the fault even if it hadn’t been formally reported. In fact, they had applied some patching but that had occurred years ago, with no formal record.)

The ruling received extensive coverage across the state. A Walla Walla Union-Bulletin editorial noted, “Cities across Washington state should view the roads they maintain with bicycle riders in mind. In addition, they should expect growing bicycle traffic on their roads and should plan for maintenance accordingly. Bikes are an increasingly popular mode of local transportation — for work, errands and recreation. In doing so, it will make roadways safer for all. (Cities have responsibility to maintain roads for bikes; An appeals court ruling this week in Washington state rightly sends that message, July 1, 2016).

The Kitsap Sun article provides more information on the suit: Lawsuit from bicyclist against Port Orchard can go forward (June 29, 2016).

The Port Orchard public works director stated in his deposition that the city fixes roadways on a “complaint-based system” and the city had not received complaints about that stretch of road. Let’s make sure street conditions reports are on record in your town.

We’re compiling a resource page with our partners at Cascade Bicycle Club with information on how you can contact your town’s street or public works department to report hazardous conditions. Email us with a link to the page with your town’s reporting process or app and we’ll add it to the list. This selection of towns gives you an idea of the different systems you may encounter–everything from downloading an app and using it to emailing the public works director directly. This is in no way a comprehensive list. When we have the resource page established we’ll replace the list here with a link to that page.

Kent: 253-856-5600 or via email at publicworksoperations@kentwa.gov or service request form

Pacific: Email the Public Works Directonecity.org/r listed on this page

Seattle: Use the Find It Fix It app or submit a service request

Spokane: At https://my.spokaaccount/report/ (must create login)

Tacoma: Submit request (have to create log-in if you want to track progress of the request)

Walla Walla: According to the pothole page, email pwinfo@wallawallawa.gov or call 509-527-4363.

Yakima: Click on “New Report” on the Yak-Back web page

This article was posted in Complete Streets, Funding/Policy, Infrastructure, Legal, News, Safety. Bookmark the permalink. Follow comments with the RSS feed for this post. Both comments and trackbacks are closed.