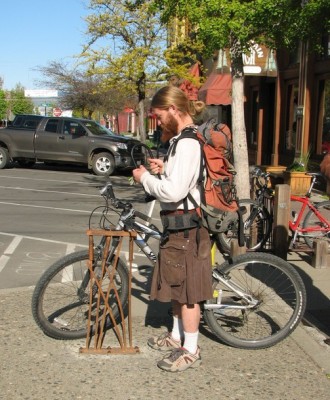 Several years ago I was approached by a citizen who cycles with the suggestion that Ellensburg become an official Bicycle Friendly Community.  After looking at the application form, which at first glance appeared somewhat daunting, I decided not to pursue it.  Ellensburg citizens who cycle know we are friendly!  Why would we need the label?

Recently, I was approached again, this time by the Director of Tourism, Amy McGuffin.  She was looking at survey data showing that many people visit our small (18,000 people), central Washington college town for the great cycling.  She asked if I would help apply for the Bike Friendly designation as a way to promote cycling tourism.  A “stakeholders” meeting and several phone calls later, we submitted our application (it really wasn’t as difficult as I had imagined).  We were rewarded this spring with a “Silver” level Bicycle Friendly Community designation from the League of American Bicyclists!

Ellensburg is a naturally easy place to ride.  Settled in the late 1800’s, the City was platted in the traditional manner, with residential neighborhoods surrounding a central commercial center and a highly connected street network, making it easy to walk and bike in minutes to most services.  Many students attending Central Washington University take advantage of the relatively gentle terrain to get around by bike.  CWU has, over the years, created a large “auto-free” portion of campus.  The semi-arid climate is generally sunny and dry, though the snow and wind deter less committed riders winter and spring.  The 2010 Census reports 17% of our citizens walk and 8% cycle to work in Ellensburg.

The City of Ellensburg has been working for several years to make it even easier to bicycle around town. The City has focused on “Engineering” – providing infrastructure such as multi-use paths, bike lanes, and sharrows, including constructing segments of the John Wayne Trail reconnection and a path under I-90 connecting two parks.  In all, Ellensburg has 15 miles of off-street and 7.5 miles of on-street bicycle network.  We have collaborated to place five custom bike racks designed by local artists in our downtown and to promote bike events.  A large effort has gone towards updating our non-motorized transportation plan and subsequent changes to City Code including requirements for bike lanes on certain new streets and bike racks at new commercial developments.  Our police department receives bike training and has a bike patrol.  They also participate in helmet give-aways and share-the-road campaigns. 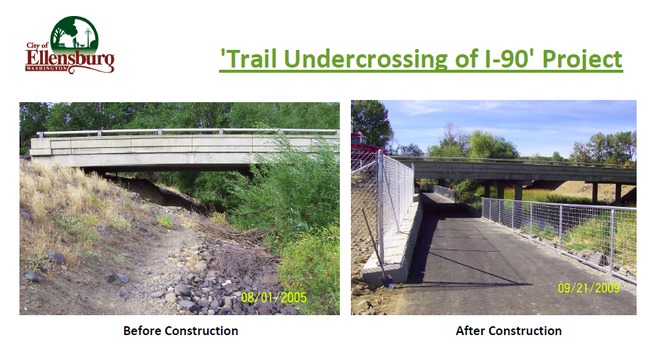 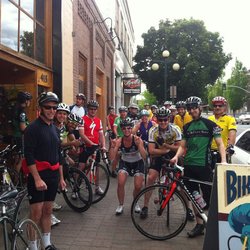 Beyond City government, the Ellensburg community has provided encouragement through fun events such as the Manastash Metric bike race and Whiskey Dick triathalon, as well as informal weekly rides organized by the local Recycle Shop and Ellensburg Mountain Bike Alliance.  The Ellensburg School District incorporates cycling into their fitness classes in middle and high school.  Younger children can participate in bike-to-school events and bike rodeos.

Ellensburg has a solid bike friendly base to build on, but there is always room for improvement.  We hope to turn our Silver into Gold in 4 years by making improvements in all areas – engineering, enforcement, education and encouragement – making Ellensburg an even friendlier place to bike for citizens and visitors alike.

This article was posted in Encouragement, Guest Blogger, Infrastructure, News, Tourism and tagged bicycle-friendly, Ellensburg, encouragement, John Wayne Trail. Bookmark the permalink. Follow comments with the RSS feed for this post. Both comments and trackbacks are closed.