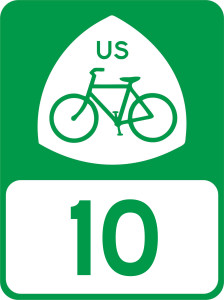 It’s official! US Bicycle Route 10 has been approved as Washington state’s first route in the nationwide US Bicycle Route System and we’re holding a ribbon-cutting ceremony this Sunday, September 14 at 1 pm in Anacortes.

USBR 10 is a 407-mile bike route following the SR 20 corridor from Anacortes to Newport at the Idaho border. It climbs and coasts six mountain passes in between. The USBR 10 interstate route will eventually connect all the northern tier states, linking Washington state to Maine and running from the Pacific to the Atlantic Ocean.

Nationally, Adventure Cycling Association is managing the endeavor to create over 50,000 miles of interstate bike routes. Washington Bikes, in partnership with Washington State DOT, is coordinating the USBRS effort in our state.

This article was posted in Events, News, Skagit County, Tourism, Travel, USBRS, WSDOT. Bookmark the permalink. Follow comments with the RSS feed for this post. Both comments and trackbacks are closed.