The “No Drop” Rule 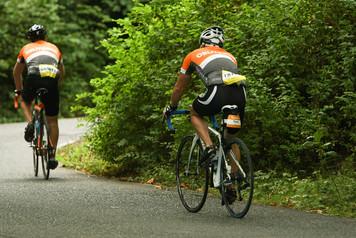 Me, getting dropped. At least Dave waited at the top.

Ah, the “no drop” rule.  It’s an interesting phrase, “no drop”.  I use the quotations, because every time I hear it, I see Dr. Evil doing the finger motions, “Evil”.

This “rule” as it were, is something I have heard about for group rides, but I rarely see it happen.  The “no drop” rule is as follows, sort of, the group will slow down or stop and wait for struggling riders.  That is to include flatting or other mechanical problems.  It is to keep the group together, so no one gets lost, and gets the stronger riders to support the weaker ones.  It looks good on paper, is a sound theory, but is seldom practiced to its fullest intent.

All to often, I have seen where someone will drop back, and an hour later the ride “leader” is asking where’s so&so.  Then the following week, you’ll see them and ask what happened.  The response is always the same: flatted, bonked, or dropped the chain.  So while they were changing the flat, sucking down a couple gels, or getting the chain back on, the “no drop” group continued on, no slowing or stopping, just hammering on.

The reason this so called “rule” pisses me off to no end, is that there have been a couple occasions when I’ve stopped to help a flatted rider, and we’ve called out the flat.  Nothing more frustrating than standing on the side of the road, yelling, and watching the group get further away, knowing that they ain’t stopping.  And then catching up to them at the coffee stop, and explaining what happened, and hearing “Bummer, dude”.

So, beware.  You could be fixing a flat by yourself, without a clue where you are, or how to get back.  If you are just starting out on group rides, I suggest finding one that says the group stays together, rather than “no drop”.

Get out there, and enjoy the ride.

This article was posted in Bike Clubs, Guest Blogger, Racing, Rides and tagged group rides. Bookmark the permalink. Follow comments with the RSS feed for this post. Both comments and trackbacks are closed.