Bikes Are Blooming in Wenatchee 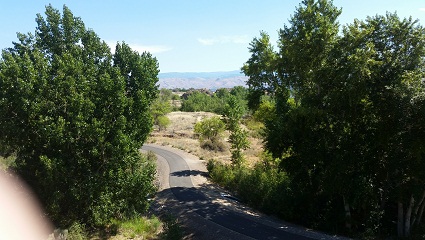 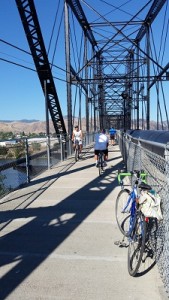 Riders on the bike/pedestrian bridge that connects East Wenatchee to Wenatchee at Pybus Market.

What a wonderful takeaway from a trip to Wenatchee this week, along with a 28-mile sunburn (it’s warm bicycling in Wenatchee this time of year — good thing they have a river to jump into), pictures of the Apple Capital Loop Trail, and new bike friends.

WA Bikes has connected with local advocates several times the past couple of years, including a workshop on creating a more bikeable/walkable community in 2012 and a visit in 2013 with a number of local riders including people working to get bikes for kids who don’t have them. Every time we go we see more people riding and more infrastructure connections to help grow bicycling.

This list will inevitably miss some of the great things happening in this beautiful valley to make bicycling better for everyone from 8 to 80; I’ll take a run at what I heard and Wenatchee bike folks can add more in the comments. 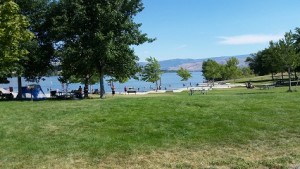 Confluence State Park, Wenatchee, WA — a refreshing stop along the Apple Capital Loop Trail. With campgrounds, swimming in the Columbia River, play equipment for the little ones, and wonderful birdwatching, it’s a great place to put on your list as you plan a bike trip to the Wenatchee Valley.

Two quick stories from the Tour de Bloom that help illustrate the value of bicycling to the Wenatchee Valley, whether or not you ride:

Wenatchee is really rolling, and at the same time local advocates say they have a lot of work to do and projects to complete. My list doesn’t include everything I heard and learned on my visit.

Your turn: If you bike in Wenatchee, what do you think people need to know about what’s happening there to grow bicycling and make it even better?

Share this on Twitter to thank local bike leaders for all their hard work:
[Tweet “Thx local advocates in Wenatchee Valley/North Cascades for all your work. #bikeWA”]

Want to read more about what’s happening for better bicycling in Wenatchee and around the state? Sign up for our e-news.

This article was posted in Advocacy, Chelan County, Douglas County, News, Tourism, USBRS, Wenatchee. Bookmark the permalink. Follow comments with the RSS feed for this post. Both comments and trackbacks are closed.